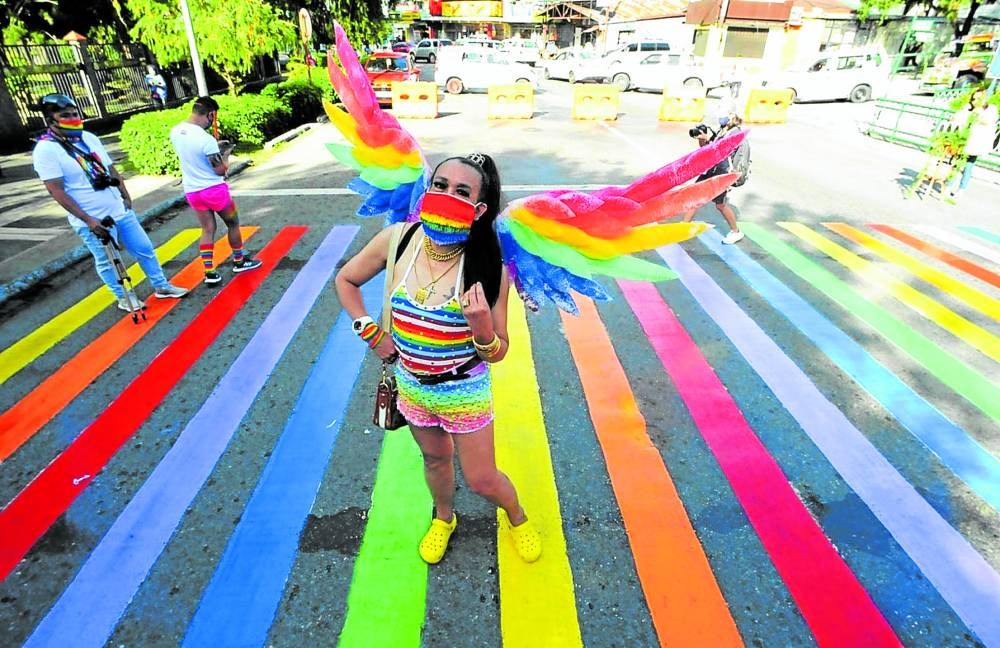 MAINSTREAMING The country’s LGBTQ community is now among the most active and organized sectors voicing out demands for equality, respect and inclusiveness, its colors in full display here for an event in Rizal Park, Baguio City, on June 19, 2021. —EV ESPIRITU

Leaders of the transgender community are calling for a more inclusive universal health care that is specific and sensitive to their needs and ensures safety for those undergoing gender transition to become transmen and transwomen.

Averilla said the gender-affirming hormone therapy (GAHT) should be included in the health package for transgender or trans individuals.

“Right now, [payment of services] are still out of pocket,” said Averilla. “We see a lot of clients buying their hormones through the internet and they’re not medically supervised when they take it,” he told the 17th Philippine National Convention on AIDS on Thursday.

“We need to collaborate with the DOH (Department of Health) and the government. Hopefully, the therapy will be included in the PhilHealth package; that’s our prayer and that’s going to be our appeal,” he said.

Averilla also raised concerns about trans persons who undergo GAHT and gender-affirming surgery to help them align their physical appearance with their gender preferences, saying these procedures should be guided by trained medical professionals because of side effects and contraindications.

He cited one of his patients who had a stroke because of “supraphysiological levels” of hormones that were greater than the usual amount in the body.

He also said trans persons should be properly assessed before going through the procedures, and should receive counseling, psychotherapy and social support to help them through their transition.

Averilla said medical providers should also have training on SOGIESC or “sexual orientation, gender identity, gender expression and sex characteristics,” which should also be expanded and institutionalized.

“A transgender client should be able to freely access a primary health facility and services should be readily available so we don’t lose them,” he said.

Dr. Lizette Lopez, chair of the subcommittee in medications of the DOH’s Health Technology Assessment Council (HTAC), said providing “free” health services designed for trans individuals should “go through the process,” such as getting approval from the Food and Drug Administration (FDA) for GAHT and other health technologies.

“A lot of lobbying and push needs to come from the community to the FDA, and then HTAC. It will take time, just so you understand that there’s a journey in all of these,” she said.

Lopez emphasized that there are only a handful of FDA-approved hormone medications, or those that can be bought in mainstream drugstores and not the black market.

It is also crucial to establish various levels of care for the trans community, said YanYan Araña, program manager of “Transcend” by the support group LoveYourself, which submitted to the DOH a recommendation for national clinical practice guidelines to institutionalize gender-sensitive health services in the barangays.

“Hopefully, in maybe five to 10 years, services will be in barangay health centers so that access would be convenient,” she said.

Current sexual and reproductive health-care services are mostly focused on urban centers: 43 treatment hubs and care clinics in Metro Manila and 69 in the rest of Luzon. The Visayas only has 34, and Mindanao, 29.

Araña noted the need to raise awareness on the trans community’s sexual health because of their perception that they are at low risk when it comes to their sexual activities.

She cited a finding by the 2021 Joint United Nations Programme on HIV/AIDS that the risk of acquiring the human immunodeficiency virus (HIV) that causes Acquired Immune Deficiency Syndrome (AIDS), a life-threatening condition, is “13 times higher among trans and gender-diverse people than the rest of the adult population.”

HIV prevalence among Filipino transwomen were at 11.4 percent, notably higher than those from Thailand (9.3 percent) and the United States (9.2 percent), Araña said. There was no incidence data for transmen.

A study on HIV testing and counseling among trans clients in the Victoria community center in Pasay City, conducted by LoveYourself from 2016 to 2019, found that fear of stigma and discrimination and insufficient knowledge on HIV and AIDS resulted in “low” service uptake.

Averilla said, “What is good is that things are being crafted and organized. And as to whether it will come in five or 10 years, we don’t know. But it’s good that we are starting to talk about it now because if we don’t push for this agenda, nothing will happen.”

When will the trans community finally feel safe?