Lab in upscale village made meth ‘for export’ | Inquirer News

Lab in upscale village made meth ‘for export’ 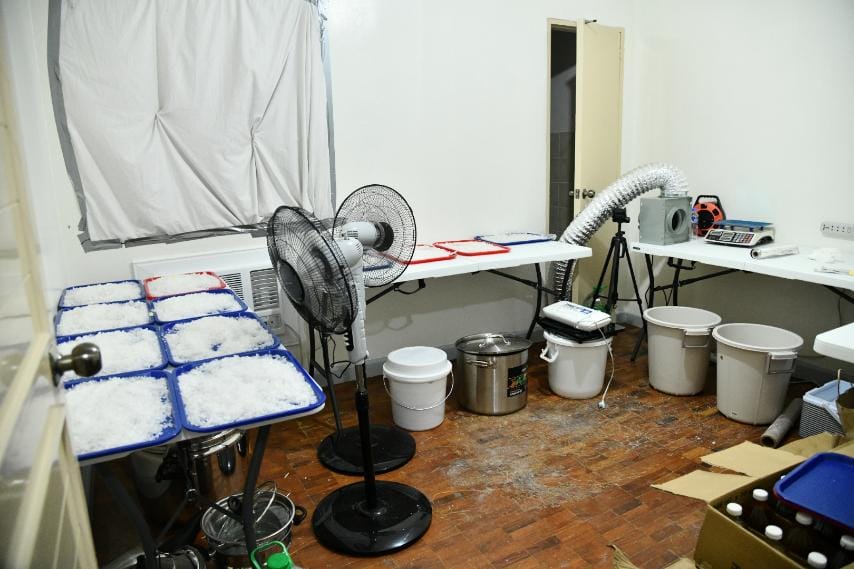 This photo from the Philippine Drug Enforcement Agency shows the alleged laboratory equipment and chemicals used for producing illegal drugs that were discovered in a Muntinlupa City residence following a raid on Friday, November 18, 2022.

From being recognized as the first “drug-cleared” barangay in Muntinlupa City, the posh Ayala Alabang Village falls back to being a drug-afflicted community after authorities on Friday dismantled a clandestine laboratory producing “shabu” (crystal meth) “for export,” the Philippine Drug Enforcement Agency (PDEA) said.

Armed with a search warrant, PDEA agents, along with police and soldiers, raided two houses inside the upscale residential subdivision, finding one with a “medium-scale” laboratory that can produce 11 kilograms to 50 kilograms of shabu “per batch.”

It was the first drug lab shut down by antinarcotics authorities since President Marcos took office, promising to sustain the war on drugs of his predecessor Rodrigo Duterte.

“If we look at it, this would have the biggest impact because it has an international impact affecting international drug syndicates,” said PDEA Officer in Charge Gregorio Pimentel, who led the operation following a monthlong surveillance.

The raiders seized 22 kg of shabu worth P149.6 million and arrested two foreigners and a Filipino.

They seized an assortment of laboratory equipment, several quantities of controlled precursor and essential chemicals (CPECs) to concoct crystal meth, and 20 kg of freshly “cooked” shabu worth P136 million pesos from a house on Mabolo Street where they arrested Aurelien Cythere, a 41-year-old French national and the supposed “chemist,” and Mark Anthony Sarayot, a 42-year-old Filipino businessman from Pasig City.

The second house on Madrigal Avenue, about a kilometer away from the first, yielded 2 kg of shabu worth P13.6 million and various laboratory equipment. Agents arrested Ariana Golesorkhi, alias “Kano,” a 33-year-old Canadian who was born in Iran.

“We are currently investigating these links and several other drug personalities,” he added.

Pimentel said the group used a “modified setup” to manufacture shabu to make it less detectable.

“The shabu is mixed in liquid form, then washed with acetone. It’s practically an odorless process, which is probably why they were confident in doing it here in a residential area,” he said.

The three suspects are detained at the PDEA National Capital Region custodial facility in Quezon City.

They will be facing charges of violating the Comprehensive Dangerous Drugs Act of 2002 for manufacturing illegal drugs and CPECs, drugs possession, and possession of equipment and paraphernalia for drugs.

Muntinlupa Mayor Ruffy Biazon commended PDEA for shutting down the shabu lab inside “one of the most exclusive, private and most secure residential subdivisions in our city.”

He said the raid “should be a wake-up call” to Ayala Alabang residents and village leaders to the danger that “lurks within the confines of their community,” noting that it wasn’t the first time that this happened.

Biazon urged residents to get to know their neighbors and cooperate with the authorities.

PDEA said the Mabolo house was rented for P300,000 and the other for P70,000 per month and that they were leased three months ago. Pimentel did not say whether the owners of the properties had any liability. The two Filipino caretakers of the two houses were not taken into custody but would be investigated, he said.

This is the third reported shabu lab that has been found inside the posh enclave over the past decade. Authorities said that there were other residences in the village that were used also as warehouses for illegal drugs.

In January 2012, a drug laboratory run by five Chinese nationals was discovered by the police on a 1-hectare property on Acacia Avenue

In May 2016, another shabu lab run by three Taiwanese was dismantled along Tamarind Drive.

Ayala Alabang was the first of Muntinlupa’s nine barangays to be declared “drug-cleared” by PDEA in September 2018.

But just a month later, 6 kg of “kush,” or high-grade marijuana, were seized by PDEA agents from two suspects renting a house on Agoncillo Street.

In March 2019, PDEA returned to Ayala Alabang, seizing more than P1.1 billion worth of shabu concealed in tea packs in a house on Apitong Street, which was rented by three Chinese nationals and their Filipino interpreter.

The Muntinlupa Drug Abuse Prevention and Control Office said Ayala Alabang had 30 days to clean up the barangay to retain its drug-cleared status.

Sitting on a 700-ha land in the western part of the city, Ayala Alabang has more than 4,600 houses belonging to some of the country’s wealthiest and economically and politically powerful families, including the family of the late President Fidel V. Ramos and former Sen. Panfilo Lacson.

“We call on property owners and managers to ensure that their properties are not utilized for illegal purposes. At this time, each and every rented or vacant property should be checked and profiled to rule out its use by criminal elements,” said Biazon, who also lives in the village.

“The safety and security of communities is the mission and duty of our law enforcement units. But it will take a whole-of-city approach to beat illegal drugs,” he added.