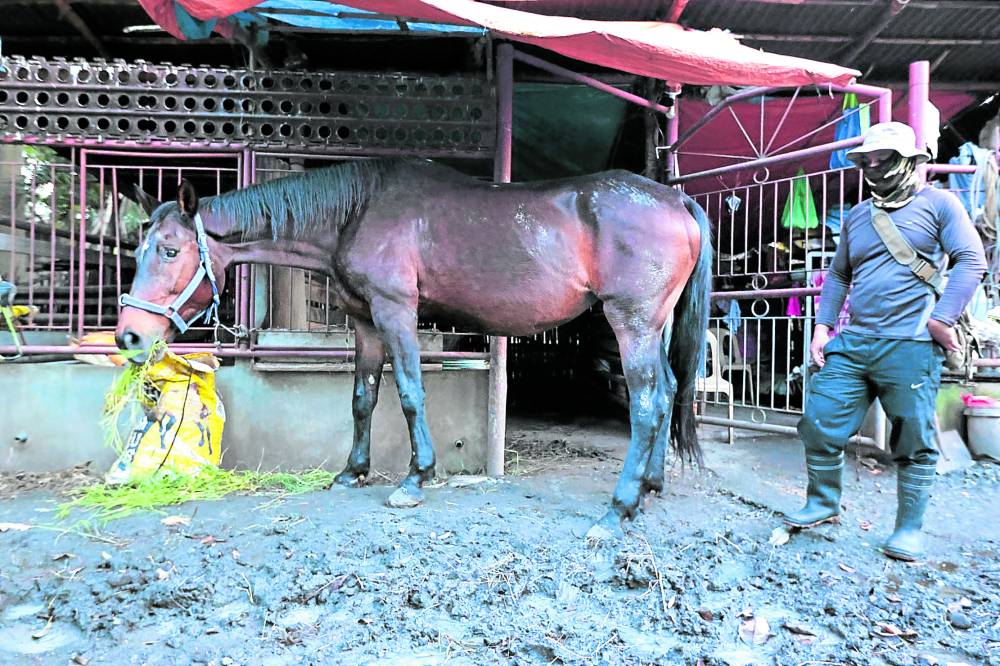 Yet another curiosity has surfaced within the walls of New Bilibid Prison (NBP)—a menagerie of horses, game fowls and pythons that are keeping the guards and convicts company at the national penitentiary in Muntinlupa City.

From more than 7,500 cans of beer surrendered by prison gang leaders to an excavation site for a supposed deep-diving pool, it seems the mysteries never cease at NBP with the newfound presence of animals being kept there.

The discovery of the “Bilibid zoo” happened by chance, according to Bureau of Corrections (BuCor) officer in charge Gregorio Catapang Jr., who now helms the prison agency after the suspension of Director General Gerald Bantag, a respondent in the murder of journalist Percival “Percy Lapid” Mabasa.

“We had just finished tree planting when I heard a rooster crowing. So when we searched for it, we found them each in their own ‘kubol.’ And they’re not just regular chickens, they’re Texas breeds used for cockfighting,” Catapang said in an interview on TV5.

In total, they found 10 game fowls and 15 horses. Three pythons were later discovered at the basement of the director’s quarters, which Bantag used to occupy.

An inmate who claimed to be the owner of the roosters told BuCor he started raising them after they wandered into the minimum security compound, apparently from an informal settlement near the area.Another inmate who was letting the horses graze said they were owned by Bantag and Gabriel Chaclag, the deputy director general for reformation.

But Catapang said there were no records of the animals being acquired by BuCor.

“This is a security prison. You are not allowed to keep any animal without the permission of BuCor,” he said.

“And these animals were personal belongings, which cannot be utilized for the benefit of BuCor … The government is using taxpayers’ money to take care of these animals which are not property of BuCor. We are looking to file complaints against personnel who are involved in this issue,” Catapang said.

According to Catapang, the bureau has asked the Department of Agriculture (DA) to examine the animals, noting that the horses in particular were “skinny” and in a “pitiful” state.

In a text message, Chaclag admitted several of the horses were his, saying he bought them from a BuCor officer formerly assigned at NBP. They were supposed to be transferred out of NBP, he added.

Interviewed on dzBB radio on Thursday, Bantag also admitted that the other horses were his, as they were given to him as a birthday gift in 2020.

They just grew in number after the horses were bred, he claimed.

“The horses are used to train BuCor personnel in horseback riding, which is patterned from the [Royal] Canadian Mounted Police,” Bantag said.

“The NBP is a large area. What do you want your personnel to do, run after escaping inmates?” he said, noting that taking care of horses was much cheaper than buying and maintaining a vehicle.

But Catapang retorted: “We don’t need horses to go around Bilibid because the roads here are all cemented. Bilibid is not even a mountain area.”

As for the snakes, Bantag said these were owned by a former aide who was later assigned to the Davao Prison and Penal Farm.

Asked why he kept them, he replied: “There’s so many big rats at the director’s quarters. I’ve put them in the basement to eat the rats [for] pest control.”Farm animals, however, are not a rare sight at the seven BuCor facilities nationwide, including NBP.

NBP has its own “agro production area” where inmates, with the assistance of the DA, do not only grow fruit, vegetables and ornamental plants, but also raise goats, sheep and chicken for eggs and meat.

The discovery of the animals came only days after BuCor uncovered a mysterious excavation project at NBP and weeks after a contraband sweep of the facility turned up over 7,500 cans of beer from gangs operating there, as well as other unauthorized items like laptops and cell phones.

In the dzBB interview, Bantag claimed that no taxpayer money was used to dig up land for the deep-diving pool.

He said it was funded by Agua Tierra Oro Mina Development (Atom) Corp. under a joint venture agreement with BuCor. He did not disclose the project cost.Based on the deal signed in December last year, NBP facilities were to be transferred to a 234-hectare property in Barangay Pias, General Tinio town in Nueva Ecija, which was donated by Atom to BuCor.

Atom would develop the NBP reservation into a mixed-use commercial, residential, industrial complex supposedly at no cost to the government under a 65-35 revenue sharing mechanism with the bigger share going to Atom.

But Catapang revealed that BuCor’s own backhoe and excavator trucks were used for the clandestine project, which was not found in the agency’s accounting books.

The deal with Atom was also found to be “anomalous,” as the Department of Justice (DOJ) was not consulted on this, he said.

Bantag, however, maintained that it was within his authority as BuCor head to enter into the partnership with the private firm.

According to Catapang, the excavation project, which he ordered stopped, could be “illegal quarrying,” citing reports that the previous administration was conducting a “treasure hunt” under the director’s quarters.

He also worried an unfinished tunnel for the excavation might be used as an escape route by inmates.

Meanwhile, Bantag, now a resident of Baguio City, said he has yet to receive the summons for next week’s preliminary investigation at the DOJ for the murder charges filed against him as the alleged mastermind behind the deaths of Mabasa and inmate Cristito “Jun Villamor” Palaña, an alleged middleman.

“I wanted to go to the hearing,” Bantag said but added his appearance would depend on the advice of lawyers.

State prosecutors sent the subpoena to his last known address in Caloocan City on Tuesday, ordering him to appear at the Nov. 23 and Dec. 5 hearings.

Authorities said the summons had been “deemed served” even though no one received it on Bantag’s behalf.

BuCor officials discover ‘tunnel’ but unsure what it is for