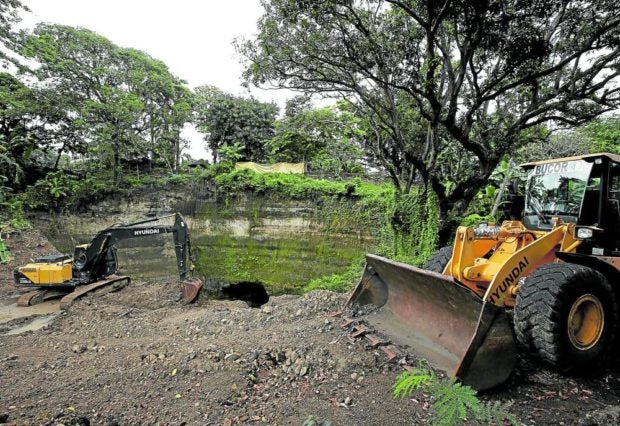 DEEPEST DIG | The “tunnel” built in what suspended corrections chief Gerald Bantag said was to have been part of a diving pool could be seen at the bottom of a rock wall at the deepest site within a 4-hectare excavation area inside the New Bilibid Prison reservation. —RICHARD A. REYES

MANILA, Philippines — Officials of the Department of Justice (DOJ) on Wednesday said they were unaware of the excavation that was going on inside the New Bilibid Prison (NBP) reservation until it was exposed by the officer in charge (OIC) of the Bureau of Corrections (BuCor) last week.

Solicitor General Menardo Guevarra, who was justice secretary under the Duterte administration, said he also had “absolutely no knowledge about this alleged excavation.”

“The same being an operational matter, the BuCor probably did not find it necessary to inform, much less seek authorization from, the DOJ,” he added.

BuCor is an agency under the DOJ. It has complete control and supervision over the sprawling reservation.

Its headquarters and the NBP’s camps currently occupy 254.73 hectares. Other parcels of the NBP reservation comprising about 190 ha are being used for the Muntinlupa City government’s socialized housing, BuCor farms or occupied by informal settlers.

In an interview with TV5 on Thursday last week, BuCor OIC Gregorio Catapang Jr. said he learned about the excavation last month shortly after taking over the post from Gerald Bantag, who was suspended in connection with the investigation of the murder of radio commentator Percival “Percy Lapid” Mabasa and the death of NBP inmate Cristito “Jun Villamor” Palaña.

The excavation covered an area of around 4 hectares formerly covered with trees. The deepest part was about 30 meters, equivalent in height to a nine-story building.

Bantag admitted to the same network a day after Catapang’s interview that he had directed the excavation six months earlier near the eastern part of his official residence inside the NBP reservation.

He said he had intended to build the “deepest swimming pool at least in Metro Manila” which he planned to be used by many BuCor personnel who were scuba diving enthusiasts like him.

Assistant Secretary Mico Clavano, the department’s spokesperson, said they were not aware of the excavation prior to its discovery by Catapang.

“Not at all,” he told the Inquirer. “We were all surprised to see pictures and videos.”

Clavano said Catapang had been directed to investigate the excavation and submit a report.

According to Catapang, part of the excavation was an unfinished “tunnel,” which was around 170 centimeters high at the entrance. He said the tunnel could extend to Muntinlupa’s Poblacion River, and might be an escape route for inmates.

The Department of Environment and Natural Resources (DENR) gave no permit for the excavation, which it considered an “illegal quarrying” activity, according to Catapang.

He said officials were waiting for the “expert advice” from the DENR on what to do with Bantag’s project.

Bantag said no tunnel was being made and that the hole in a rock wall that was seen by Catapang and shown in the news was “just for the waterway of the underwater pool.”

He also dismissed allegations that it could be used by inmates to escape, saying that it was “very far” from their location.

The excavation site itself is about a kilometer away from the NBP’s maximum security compound.

The deepest diving pool in Metro Manila is currently the 6-meter indoor pool at Scuba Studio in San Juan City. The world’s deepest is 60 meters at Deep Dive Dubai in the United Arab Emirates.

A master scuba diver trainer, who requested anonymity, said Bantag’s statement that the excavation was meant for a diving pool was “nonsense.”

Catapang also rejected Bantag’s explanations, and proceeded with his investigation.

“Why would he need another swimming pool? Did he destroy the old swimming pool to make another one?” he said.

According to the BuCor OIC, a guard posted at the director’s quarters told investigators that he and the others were “prevented from moving around.”

“They were told not to go near the ongoing quarrying or excavation. They also needed to leave their communication devices at the guard house before they entered the director’s quarters,” Catapang said.

The construction company contracted for Bantag’s project has been identified, but Catapang did not disclose its name pending the investigation.

BuCor records show that the agency awarded a project worth P994,000 in July to a construction company based in Canaman, Camarines Sur, for the “renovation of directors quarters’ facilities.”

According to Catapang, they also found metal detectors at the excavation site, fueling speculations that officials of the previous prison administration were “treasure hunting.”

Venancio Tesoro, a former superintendent of NBP, said there was an “urban legend” that Japanese soldiers buried treasures, including gold, at the NBP reservation during World War II.

Both the Director’s Quarters and the NBP Administration Building were built in 1940.

“But these were just rumors and have no basis,” he said in a message exchange with the Inquirer.

But he said that an excavation for purposes other than a pool was “possible.”

“If that’s really a tunnel, either they will put something there, or it will be a passageway for a clandestine operation. In a penal setting, tunnels are naturally meant for escaping or breaking out,” Tesoro told the Inquirer.

BuCor officials discover ‘tunnel’ but unsure what it is for