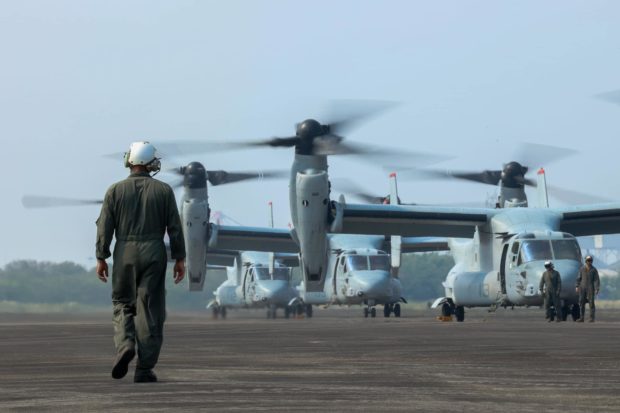 US Marine Corps MV-22B Ospreys assigned to Marine Medium Tiltrotor Squadron 363, 1st Marine Aircraft Wing, arrive at Subic Bay International Airport ahead of Balikatan 22 in the Philippines in March 2022. (Photo from the US Marine Corps)

MANILA, Philippines — After facing delays under the previous administration, millions of dollars worth of projects under the Enhanced Defense Cooperation Agreement (Edca) between the Philippines and the United States will be implemented at the first five agreed locations starting next year.

The announcement was made on Tuesday by the Department of National Defense (DND), which also stressed its commitment to “accelerate the implementation of Edca by concluding infrastructure enhancement and repair projects, developing new infrastructure projects at existing Edca locations, and exploring new locations [to] build a more credible mutual defense posture.”

A total of $66.5 million has been earmarked to enforce the deal in the next two years, in addition to the construction of training, warehouse, and other facilities.

Edca allows Washington to preposition personnel and assets in selected military bases in the country to quickly respond during natural disasters or other crises.

The implementation of Edca faced delays during the term of former President Rodrigo Duterte, who had repeatedly expressed his disdain for the United States.

The Marcos administration, on the other hand, has been fostering stronger ties with partner countries like the United States and Japan as the Philippines deals with a territorial dispute with China in the South China Sea.

The agreement was originally designed to address Chinese aggression and respond to natural disasters when it was signed during the time of former President Benigno Aquino III.

But the situation in Taiwan, located a few miles above northern Luzon, has also become a concern for both the Philippines and the United States in recent months amid China’s increased military activities.

The Philippines and the United States are looking to add five more Edca sites in Luzon — two in Cagayan, and one each in Zambales, Isabela, and Palawan, according to Armed Forces of the Philippines chief Lt. Gen. Bartolome Vicente Bacarro.

Two of the new sites include an air base in Lal-lo, Cagayan, and a naval base in Subic, Zambales, which is near Panatag (Scarborough) Shoal.