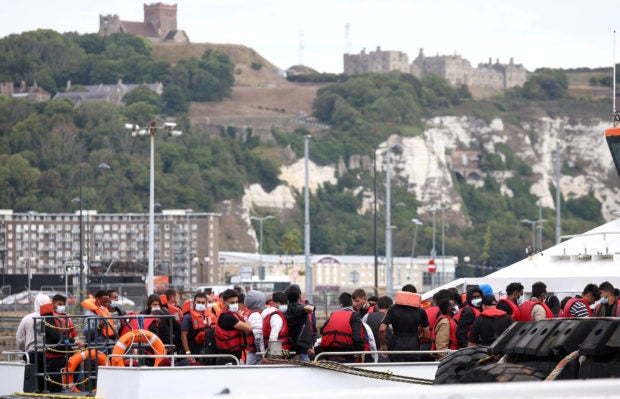 Migrants arrive at Dover harbour onboard a Border Force vessel, after being rescued while attempting to cross the English Channel, in Dover, Britain, August 24, 2022. REUTERS FILE PHOTO

PARIS/LONDON –Britain and France on Monday signed an agreement worth 72.2 million euros ($74.5 million) over the coming year to ramp up efforts to stop illegal migrants from making perilous journeys across the Channel.

So far this year more than 40,000 people have crossed the Channel in small boats, up from 28,526 last year, putting pressure on new British Prime Minister Rishi Sunak and interior minister Suella Braverman to do more to stem the flow.

“It is in the interests of both the UK and French governments to work together to solve this complex problem,” Braverman said in a statement, after meeting with French interior minister Gerald Darmanin in Paris on Monday morning.

“There are no quick fixes, but this new arrangement will mean we can significantly increase the number of French gendarmes patrolling the beaches in northern France and ensure UK and French officers are working hand in hand to stop the people smugglers.”

The British government said the multi-year deal would see a 40% increase in the number of UK-funded officers patrolling French beaches in the coming months.

British officers will also be embedded in French-led control rooms and on the ground with their counterparts for the first time to improve coordination and information sharing.

The agreement will strengthen security at ports by funding investment in surveillance technology, drones, detection dog teams, CCTV and helicopters to help detect and prevent crossings, as well as supporting reception and removal centers in France for migrants whose journeys to the UK are prevented.

France, Britain beef up patrols, crack down on illegal migration