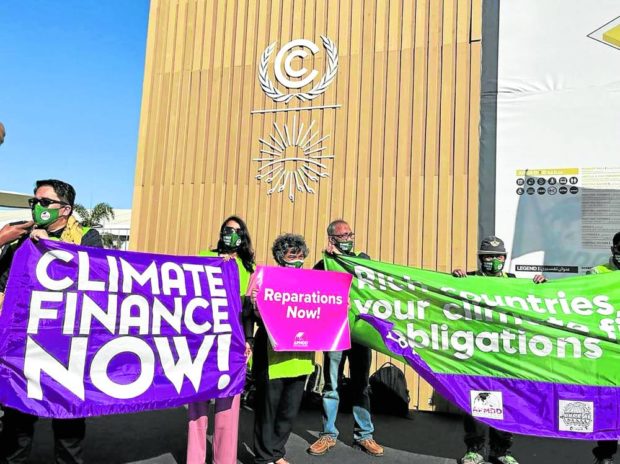 The first week of the 27th Conference of Parties (COP27) to the United Nations Framework Convention on Climate Change started with a flurry of promises and announcements from government leaders to step up efforts to curb greenhouse gas emissions and help poor countries adapt to climate crisis.

In the coming days, the Philippines and other climate-vulnerable countries will step up their demands for finance mechanism with the creation of a loss and damage finance facility that has been adopted in the conference agenda.

The United States is one of the largest greenhouse gas emitters, along with China, India and South Africa.

Perhaps this year, more than ever, negotiators haggling over the deal in conference rooms at this small Egyptian resort city know their decision will be watched closely by civil society groups and climate activists.

Yeb Saño, Greenpeace Southeast Asia executive director, told the Inquirer: “This is game on for agreeing [to] the loss and damage finance facility so urgently needed to support climate justice for developing countries, particularly the most impacted….The fight is far from over.”

He added: “The blatant attempt of rich countries to push this item off the agenda of the COP27 table gives us a hint of some of the delay and diversion tactics that can be anticipated ahead.”

Saño, a former Philippine climate commissioner and negotiator in the conference, said countries must insist on the formation of a dedicated loss and damage finance facility to collect and distribute compensation money to worst-hit nations coping with unavoidable impacts of the climate crisis.

“Countries like the Philippines now live in an era where the limits for adaptation have been realized, …[which is why] wealthy countries must pay their fair share for a crisis they are most responsible for causing. The rich countries should act on these demands and make sure fossil fuel polluters are made to pay for damage they have caused,” he said.

As in previous climate talks, vulnerable poorer countries that contributed the least to warming temperatures have pushed for the $100 billion target set in 2009 for climate action. The longstanding pledge to provide the money was pushed back from 2020 to 2025.

Despite the legally binding Paris Climate Change Agreement among countries to prevent average temperatures rising by more than 1.5 degrees Celsius above pre-industrial levels, the world is still on track for dangerous levels of warming, making every heat wave, sea level rise and glacier melting more intense and life-threatening, according to the provisional State of Global Climate Report of the World Meteorological Organization released at COP27.

This finding was echoed by a new report by the Climate Vulnerable Forum (CVF) showing that major emitting countries need to strengthen their climate plans for 2030 to avert catastrophe.

“The Glasgow Climate Pact is broken because rich and big polluting countries did not act to save 1.5 degrees as we all agreed only a year ago at COP26 climate talks in Glasgow. These countries are far off from a fair-share effort to limit warming to within the crucial 1.5 degrees goal, which we consider as a survival threshold,” said Henry Kokofu, special envoy of the CVF presidency of Ghana.

The CVF is an organization of 58 nations, including the Philippines, that are most threatened by climate change representing some 1.5 million people worldwide.

The Philippines has committed to cut greenhouse gas emissions by 75 percent by 2030.

Young Filipino climate activists at the conference are also leading the call for the rapid phaseout of coal, oil and natural gas and helping poor countries make the transition to clean energy.

“We condemn the continued avoidance of developed countries to owe [up] to their historical responsibility. We demand that they scale up their commitments to reduce emissions that will limit warming to 1.5 degrees Celsius. We cannot imagine a warmer world beyond that,” said Gerry Arances, executive director of the Center for Energy, Ecology and Development.

Meanwhile, civil society groups and grassroots organizations were being “pushed to the sidelines” and “out of negotiation rooms” at the conference, said Ivan Enrile of Ibon Foundation International.

Speaking at a side event at COP27, Enrile pointed out that grassroots voices were being “marginalized” in many ways—from deprivation of access to resources, exclusion from policymaking, to “outright repression” and killing of environmental land and human rights defenders.

“Polluting companies continue to shape and define COP agenda, allowing them to plunder our lands, water and forests and pollute the air we breathe,” he said.

Dinda Yunda of Indonesia criticized how big forums like G-20 and COP kept bragging about energy transitions, yet in her country, investments and funds for energy initiatives have led to the destruction of people’s livelihoods and culture.

“The climate solution has to be community-oriented, where women have to be at the heart of the decisions and solution[s],” Yunda said.

—WITH A REPORT FROM JANE BAUTISTA INQ

COP27: Biden says the climate crisis is about ‘very life of the planet’