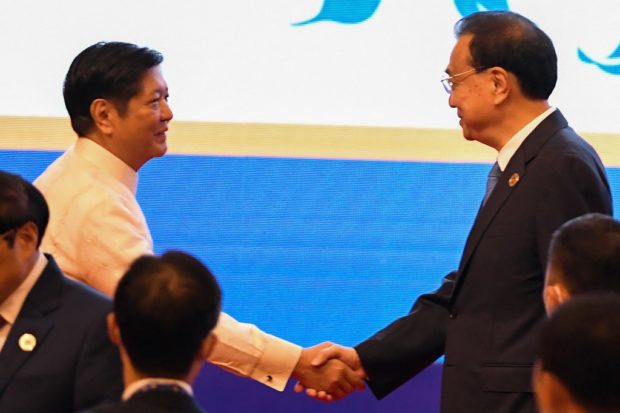 ‘FINDING RESOLUTIONS’ President Marcos meets with Chinese Premier Li Keqiang during Beijing’s summit with the Association of Southeast Asian Nations, one of the series of forums in PhnomPenh last week led by the regional bloc. —AFP

PHNOM PENH, Cambodia—The South China Sea can be a “nexus of vibrant economic engagements and interactions” if nations will work together to ensure that the disputed territory remains a “sea of peace, security, stability and prosperity,” President Ferdinand “Bongbong” Marcos Jr. said on Sunday.

The President made this call anew in his speech at the 17th East Asia Summit (EAS), a regional forum of 18 countries, held on Sunday morning here.

It was the second time, throughout the course of the summits here by the Association of Southeast Asian Nations (Asean), that Mr. Marcos raised the issue of the maritime dispute over the South China Sea.

Beijing makes sweeping claims over nearly all the resource-rich expanse, which Manila says encroach on waters within the country’s exclusive economic zone (EEZ).

On July 12, 2016, an arbitral court in The Hague, Netherlands, ruled against China’s historic claims on the South China Sea as demarcated by its so-called nine-dash line and recognized the Philippines’ 370-km EEZ in the West Philippine Sea.

China refused to participate in the arbitration and continues to ignore the arbitral award despite international pressure.

Mr. Marcos stressed that the Philippines “considers maritime cooperation as a key priority in bilateral and multilateral cooperation and engagements specifically in the South China Sea.”

“We must ensure that the South China Sea remains a sea of peace, a sea of security and stability, and of prosperity,” he urged fellow state leaders at the summit.

He added: “With the United Nations Convention on the Law of the Sea [Unclos] and international law as our basis, the South China Sea will be a nexus of vibrant economic engagements and interactions, not an epicenter of armed conflict or geopolitical maneuverings.”

Mr. Marcos also reminded members of the regional forum to be guided by the universal principles of peaceful coexistence and friendly cooperation as laid out in the Treaty of Amity and Cooperation in Southeast Asia (TAC).

TAC was established in 1976 and embodies universal principles of peaceful coexistence and friendly cooperation among states in Southeast Asia. It is a legally binding code for interstate relations in the region and beyond, the Asean Secretariat said, adding that the treaty has been amended three times—in 1987, 1998 and 2010—to allow for accession by states outside Southeast Asia as well as for regional organizations whose members are sovereign states, among others.

As of August this year, there are 49 High Contracting Parties (HCPs) to the TAC, including the United States, China, Japan and Russia.

“As [HCPs] to the treaty, we have a moral and legal obligation to work toward finding resolutions and not resort to inciting conflicts. That path leads us only to perdition,” Mr. Marcos said.

The summits formally closed on Sunday afternoon with the Asean chairmanship turned over to Indonesia.

The EAS was initiated in 2005 in Kuala Lumpur, Malaysia. At its inception, the summit included 16 countries, namely, the member-states of Asean, Australia, China, India, Japan, New Zealand and South Korea.

The United States and Russia joined the EAS in 2011.

Mr. Marcos first brought up the territorial conflict last Friday during the 25th Asean-China Summit, where he pushed for the early conclusion of the Code of Conduct in the South China Sea as this would be an “example of how states manage their differences.”

He had earlier lamented the slow progress in completing the Code of Conduct between Asean and Beijing. A day after he pushed for the completion of the Code of Conduct, Mr. Marcos had a brief conversation with Li on the sidelines of the Asean Plus Three Summit that Saturday. This group includes China, Japan and South Korea.

Amid the maritime dispute, the Chinese premier said his country would work closely with nations in the regional bloc to ensure peace and stability on the basis of mutual respect for international law.

The President is expected to go to China on a state visit in early January 2023.

In an interview with reporters here, he reiterated his point that “it’s important…we adhere to international law and the Unclos. This is because trade passing through the South China Sea is important not just for Asia but for the entire world. So it’s very important that there is peace in our region.”

According to an update from Malacañang on Sunday evening, Trudeau said Canada and the Philippines could work together to strengthen economic cooperation, protect human rights, uphold opportunities for women and tackle climate change.

The Canadian leader also noted the people-to-people ties between the two nations.

“We have some very strong Philippine Canadian members of parliament and members of my team who are very happy that we’re able to launch a new area in our friendship and our partnership and I’m very much looking forward to it,” Trudeau was quoted as saying to Mr. Marcos.

In response, Mr. Marcos noted the integration of Filipinos in Canada, which he said serves as a strong foundation for Philippine-Canada relations.

“They (Filipinos in Canada) all seem to have become part of the workforce, become part of society. They have found their place and they had been given that place by the Canadians, and for that, they are grateful, and we are grateful,” the President said. INQ