Climate activists take to the trees to save village | Inquirer News

Climate activists take to the trees to save village 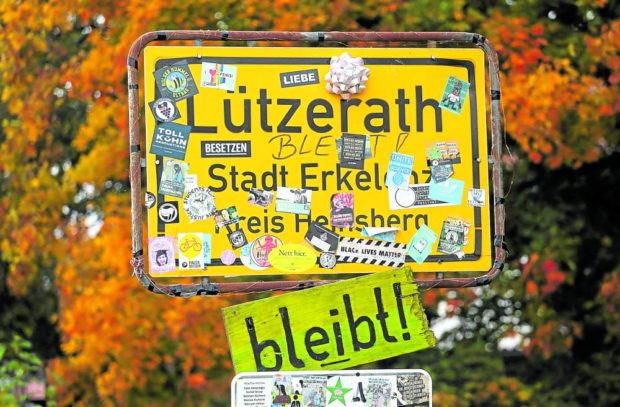 HERE TO STAY Environmental activists living in the village of Luetzerath place a sign that reads “remain” on a street to express opposition to a mining project. —REUTERS

LUETZERATH, Germany—After the last farmer packed up and left in October, climate activists are the only people left in the village of Luetzerath, Germany, which sits above a rich vein of coal.

In huts perched 6 meters aboveground in the trees, the young campaigners say they can hold out against the authorities if they try to clear them out.

They are there in an effort to stop the village being bulldozed to allow the extension of a neighboring open-air coal mine.

They do not know when the police might come to force them out, but with Germany in need of more coal, most think it will be soon.

Europe’s largest economy has restarted part of its mothballed inventory of coal power plants to relieve the pressure on gas-powered facilities, following a cut to supplies from Russia in the wake of the invasion of Ukraine.

Several thousand protesters are expected to descend on Saturday on Luetzerath, now a symbol of the resistance to fossil fuels, to urge more action from participants in the COP27 conference in Egypt.

“We do not know when the evacuation is planned,” says Alma, a French activist who uses a pseudonym.

“It’s a question of responsibility, one that is difficult to take for the authorities because it’s a huge operation, for which thousands of police officers need to be mobilized over several weeks,” she says.

After studying, Alma decided to go full time as an activist and was one of the first to set up the activist camp in Luetzerath two years ago.

One by one, the residents of Luetzerath have left as their homes were expropriated and they were compensated and rehoused.

She and the dozens of others who have joined her in the occupied village felt betrayed earlier this year when the government, led by Social Democrat Olaf Scholz, announced a compromise with the energy giant RWE to allow the extension of the nearby mine.

Under the agreement, five nearby villages will be spared, but Luetzerath is set to disappear.

Even though RWE, long one of Europe’s biggest emitters, said it would stop producing electricity with carbon in 2030, the activists are not persuaded.

“If RWE extracts all the coal under Luetzerath, Germany will certainly violate the Paris [climate] accord because of the emissions from the mine. The village is therefore not just a symbol, it’s a critical point in the fight against climate change,” says Alma.

On the other side of the road sits the coal pit, where excavators move across golden-black dunes of sand.

The lignite still in the ground here will be needed “from 2024” to supply power plants as other mines close, RWE says.

According to a 2021 report by the DIW economic think-tank, the energy company could extract a further 100 million tonnes of coal without having to demolish Luetzerath and the other five villages.

Despite resorting to more coal power in the current energy crisis, Germany says it is not wavering from its aim of exiting coal power in 2030.

Though the climate activists want action accelerated to bring down emissions.

In recent months, some activists have turned to more extreme means to get their voices heard—including by sticking themselves on main roads and halting traffic.

Recently, some activists also flung mashed potatoes at a Monet painting in a Potsdam museum.

In Luezerath, climate activists have set up an intricate camp in the trees to avoid being quickly evicted by the police.

Using a network of cables, they have connected their encampment. The militants think they can hold out for several weeks, six meters (12 feet) above the ground.

On the ground, in the middle of the camp, around 20 militants try to raise a pole made of a giant tree trunk with a system of pulleys.

“The poles are tied to the trees in a way that ought to make it impossible to cut the ropes without putting someone’s life in danger,” Alma says.