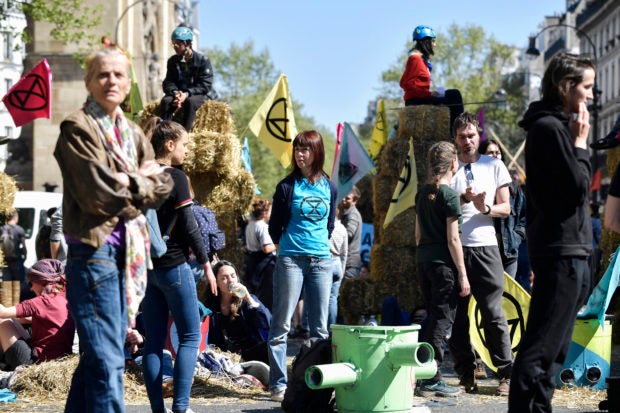 Activits of the climate change action group Extinction Rebellion block the Paris Grand Boulevard during a demonstration in Paris, on April 16 2022. AFP

Around 300 meters (980 feet) of a main thoroughfare in central Paris was taken over by activists over the Easter weekend, with some of them moving in hay bales and cement-filled containers to block traffic.

Demonstrators also glued themselves to a limousine in central London.

The Metropolitan Police said in a tweet that the protest caused “significant traffic disruption” and that the protesters “locked onto a stationary vehicle in the middle of the road… believed to be their own”.

Activists from the group had glued themselves to a tanker earlier on Saturday, blocking the vehicle on a road near Hyde Park.

“I am aware that my actions will cause anger to many people and I am prepared to be held accountable,” Stott said.

“But our government should also be held to account for its decisions which are destroying our planet’s ability to support human civilisation.”

In Paris, activists hung out a large red banner that read: “This world is dying. Let’s build the next one.” The protest is scheduled to continue until Monday.

“Rebelling is our duty,” had been daubed in graffiti on a wall nearby.

“This is the only way of ensuring that everyone talks a bit about climate change,” Antoine, a young activist who declined to give his surname, told AFP.

A line of French riot police stood opposite the protesters, but officers did not intervene.

Extinction Rebellion has carried out a series of protests in Britain in the past week, including shutting down four of London’s busiest bridges on Friday.

A scientist from the group, Emma Smart, was freed on Saturday after starting a hunger strike following her arrest earlier in the week during a protest targeting the British energy ministry, Extinction Rebellion said.

After several oil depots were targeted by the campaign group Just Stop Oil in recent days, many companies including ExxonMobil successfully took out injunctions to stop such actions, the government in London said.

The British government last week presented a new energy security strategy after the war in Ukraine and soaring inflation, with a greater focus on nuclear power and renewable energy, but also oil from the North Sea.

The strategy has angered many activists who believe the government is not doing enough to move away from fossil fuels.

Many French environmentalists have been left despondent after the first round of presidential elections last weekend in which Greens candidate Yannick Jadot and hard-left ecologist Jean-Luc Melenchon were eliminated.

A second round run-off will be held next Sunday between centrist President Emmanuel Macron and far-right leader Marine Le Pen.