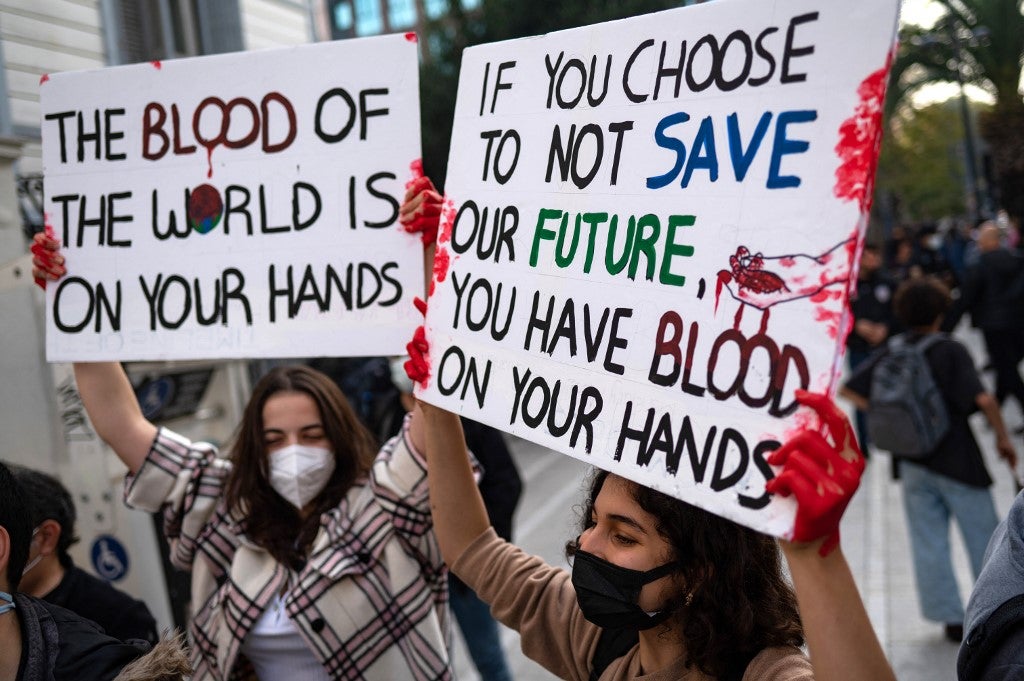 Demonstrators hold placards during a protest rally as part of a global day of action on climate change in Istanbul, on November 6, 2021. (Photo by Yasin AKGUL / AFP)

GLASGOW, United Kingdom — Tens of thousands of protesters braved rain and wind in Glasgow Saturday as part of worldwide demonstrations against what campaigners say is a failure of crunch UN climate talks to act fast enough to tame global warming.

Dozens of events were planned worldwide to demand cuts in fossil fuel use and immediate help for communities already affected by climate change, particularly in poorer countries.

In Glasgow, police earlier said they expected up to 50,000 people to parade through the streets. Organisers later claimed more than 100,000 had turned out.

Demonstrators marched close to the COP26 summit venue and through the centre of the Scottish city on Saturday in a colourful protest with music and dancing.

“No more coal! No more oil! Keep our carbon in the soil!” chanted protesters.

Some carried placards calling for “Climate Justice” and a “Fair COP” as they made their way to a park on the edge of the city in the afternoon.

“We need the biggest emitters to be held responsible,” Kathy Jetnil-Kijiner, from the Marshall Islands, told the crowd.

“We did nothing to contribute to this crisis, and we should not have to pay the consequences.”

Keeping up the pressure

Glasgow is hosting delegates from nearly 200 countries for the crucial UN talks, tasked with hammering out how to meet the Paris Agreement goals of limiting temperature rises to between 1.5 and 2 degrees Celsius.

During the first week of the meeting, some countries have upgraded their existing pledges to reduce greenhouse gas emissions, while there have been separate deals on phasing out coal, ending foreign fossil fuel funding, and slashing methane.

But many thorny issues remain and many protesters on the streets said they were there to keep up the pressure.

Jill Bird, 66, who had travelled to Glasgow’s march from Bristol, was among a group of people dressed in white jumpsuits with “greenwash busters” backpacks.

Swedish campaigner Greta Thunberg said the summit had gone nowhere near far enough in a speech at Friday’s youth march in Glasgow, where she labelled the conference “a failure”.

She did not speak at Saturday’s rally, but sent a tweet in the evening saying the global protests sent “a clear signal to people in power at COP26 to protect people and planet”.

“Our so-called ‘leaders’ aren’t leading — THIS is what leadership looks like!” she said over a photograph of crowds of demonstrators in Glasgow.

A pre-COP26 estimate from the UN said that national climate plans, when brought together, put Earth on course to warm 2.7C this century.

With just 1.1C of warming so far, communities across the world are already facing ever more intense fire and drought, displacement and economic ruin wrought by global heating.

And a major assessment last week showed global CO2 emissions were set to rebound in 2021 to pre-pandemic levels.

Protesters took to the streets in cities across the world to demand more radical action.

About 1,000 people gathered in London outside the Bank of England with placards reading “Less talk more action” and “No More COP outs”.

Security had been boosted for Saturday’s march, but it had a party atmosphere and wrapped up in the late afternoon with few incidents.

“Thousands of us are marching right across the world today to demand immediate and serious action,” said activist Mikaela Loach.

“We’re clear that warm words are not good enough — and that the next week of talks must see a serious ramping up of concrete plans.”

COP26 negotiations will pause on Sunday ahead of what is shaping up to be a frantic week of shuttle diplomacy, as ministers arrive to push through hard-fought compromises.

Countries still need to flesh out how pledges made in the Paris deal work in practice, including rules governing carbon markets, common reporting timeframes and transparency.

Dan Blumgart, 33, was at London’s protest holding a “Mars sucks, save Earth” placard.

“I really like the planet we live on and I want it to be, you know, able to keep it okay to live on,” he said.