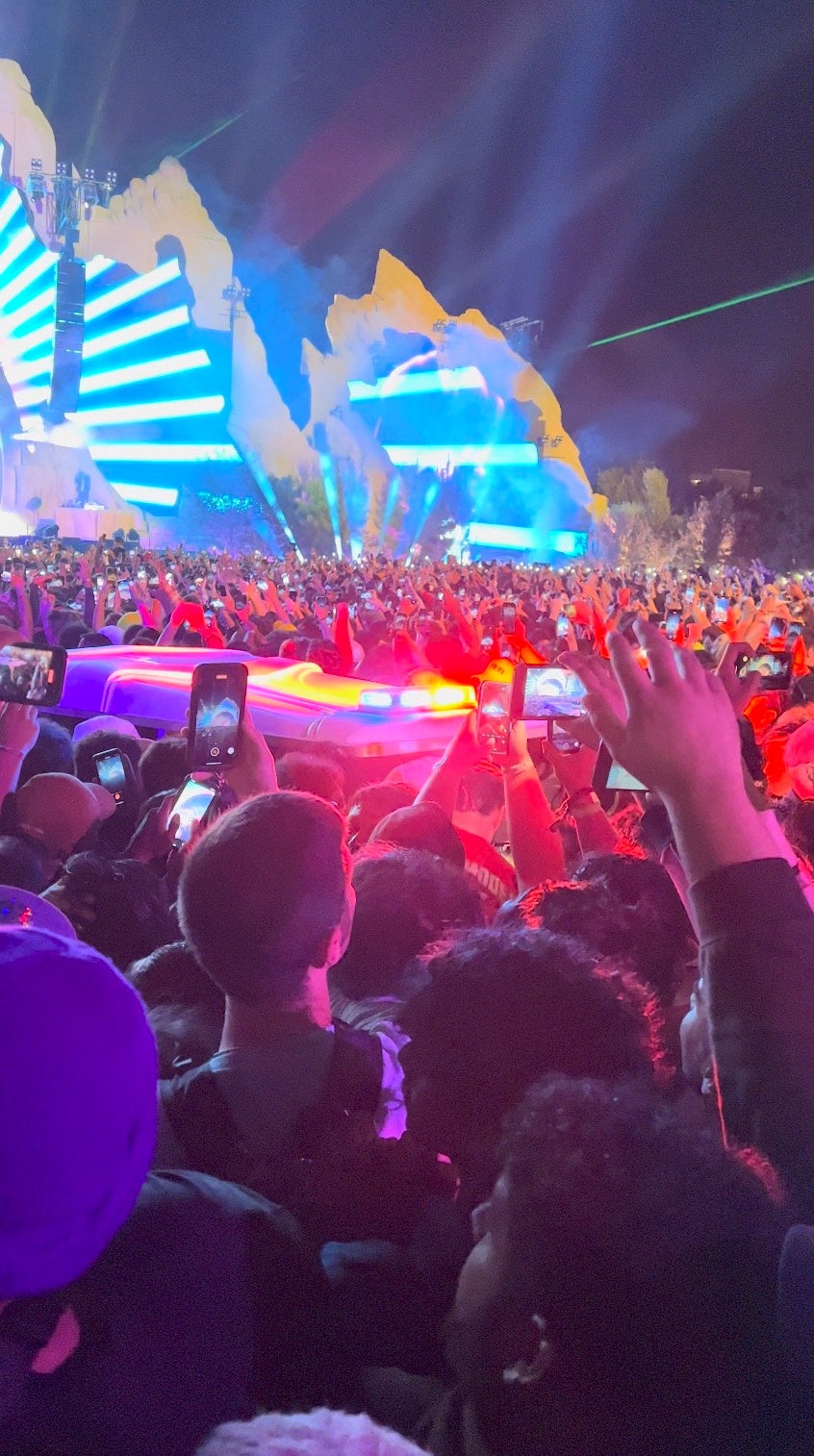 An ambulance is seen in the crowd during the Astroworld music festiwal in Houston, Texas, U.S., November 5, 2021 in this still image obtained from a social media video on November 6, 2021. Courtesy of Twitter @ONACASELLA /via REUTERS

HOUSTON — A crush of fans pushing toward the stage during rap star Travis Scott’s Astroworld music festival in Houston killed at least eight people and injured dozens more as panic rippled through the crowd of largely young concertgoers, officials said on Saturday.

City Police Chief Troy Finner said his department has opened a criminal investigation by homicide and narcotics detectives following unconfirmed reports that someone in the audience “was injecting other people with drugs.”

The disaster unfolded at NRG Park at around 9:30 p.m. on Friday during the headline performance by Scott, a Grammy-nominated singer and producer, following what police and members of the crowd described as an escalation of unruly behavior.

As some in the sold-out audience of about 50,000 surged toward the stage, people began to fall unconscious, some apparently suffering cardiac arrest or other medical issues, officials told reporters outside the venue. Minutes later the chaos was declared a “mass casualty incident.”

“It happened all at once. It seemed like it just happened … over the course of just a few minutes,” said Houston Police Executive Assistant Chief Larry Satterwhite, who was at the front of the event when the situation began.

Satterwhite said he immediately met with promoters and they agreed to halt the show. Officials said the concert was brought to an end by 10:10 p.m.

Finner said that among the “narratives” under review by police were reports suggesting “some individual was injecting other people with drugs.”

One report involved a security officer “who felt a prick in his neck” as he was trying to restrain or grab someone and then fell unconscious, only to be revived with a dose of the opioid antidote NARCAN, Finner said, citing an account from medical personnel who treated the officer.

Finner said the medical staff also noticed what appeared to be a needle mark on the officer’s neck.

It was not clear whether authorities suspected such an episode played a role in the crowd surge, but Finner said, “we’re going to get down to the bottom of it.”

City Fire Chief Samuel Peña said it appeared the venue had ample exit routes for fans and that none was obstructed.

Twenty-five people were taken to hospitals by ambulance after the crush began, some of them in cardiac arrest, with 13 still hospitalized on Saturday – five under age 18 – following the discharge of four patients, Mayor Sylvester Turner told reporters. Eight people died. Most ranged in age from 14 to 27, though one victim’s age was not immediately known, Turner said.

After mobbing entrance gates and merchandise booths early in the day, the crowd grew increasingly unruly as performers took the stage, according to 19-year-old festival goer Hamad Al Barrak.

“There were just too many people,’ said Al Barrak, who described chaos as he tried to buy festival gear. “We were all pressed together. You felt like you couldn’t breathe.”

Albert Merza, 43, part of a group of eight people from Detroit attending the festival, recounted seeing “a lot of drinking and crazy behavior.”

“It felt like a riot,” he said, adding that it appeared about half the crowd were under age 21. “There were people throwing out stuff, objects flying everywhere.”

Nick Johnson, 17, said he witnessed a steady rise of disruptive behavior before the stampede.

“It was going on for over two hours, and it just got worse and worse,” he said.

An incident earlier in the day in which fans started “rushing” the festival gates was brought under control relatively quickly, said Finner, the police chief, adding it appeared unrelated to the deadly stampede later.

Finner said police had 528 officers assigned to the festival on Friday, along with 755 private security personnel. Peña said the venue could theoretically have held up to 200,000 but that organizers limited the crowd to 50,000, and that number seemed accurate based on ticket sales.

Houston-born Scott said he was “absolutely devastated” and vowed to support the police as they investigate.”

“My prayers go out to the families and all those impacted,” Scott wrote on Twitter. “Love You All.”

Peña described how the crush of fans quickly overwhelmed the private medical personnel for the festival, a two-day affair that was scheduled to culminate on Saturday, but was canceled after Friday night’s tragedy.

Videos posted to social media showed a chaotic scene as fans and staff tried to bring attention to injured concertgoers. One video showed fans attempting to make camera operators aware of the dangerous situation. A separate video showed people waving toward the stage and chanting “Stop the show!”

The investigation is likely to focus on security and safety protocols. Two weeks ago, another Houston concert was canceled after fans pushed into a Playboi Carti show being held within the same NRG Park complex.

Jennifer Ortega, 22, who arrived at Friday’s event at about 1 p.m. said access was orderly at that time. But by 4 p.m. the crowd at the smaller of the festival’s two stages “got pretty reckless,” with people throwing water bottles. She said she saw about three people leaving the area with bloody noses and missing teeth.

Organizers said they were cooperating with police.

“We are focused on supporting local officials however we can,” Astroworld Fest, an event organized by Live Nation Entertainment, said on Twitter.

Scott stopped multiple times during his 75-minute performance when he spotted fans in distress near the stage and asked security to ensure their safety, video posted online showed. Emergency vehicles, lights and alarms flashing, cut through the audience several times.

“We need somebody to help. Somebody passed out right here,” Scott said, according to video of his set, which included a guest appearance by Canadian rapper Drake. “Security, somebody, jump in here real quick.”

Another video clip showed police performing cardiopulmonary resuscitation on several people even as music blared in the background.

The tragedy harkens back to a 1979 concert by British rock band The Who in which 11 people were killed when fans stampeded into the Riverfront Coliseum in Cincinnati before the event.

Scott, who came to fame in the early 2010s for his unique vocal style has a daughter with Kylie Jenner from the famed Kardashian family. Astroworld is also the name of his third studio album released in 2018 to critical acclaim.