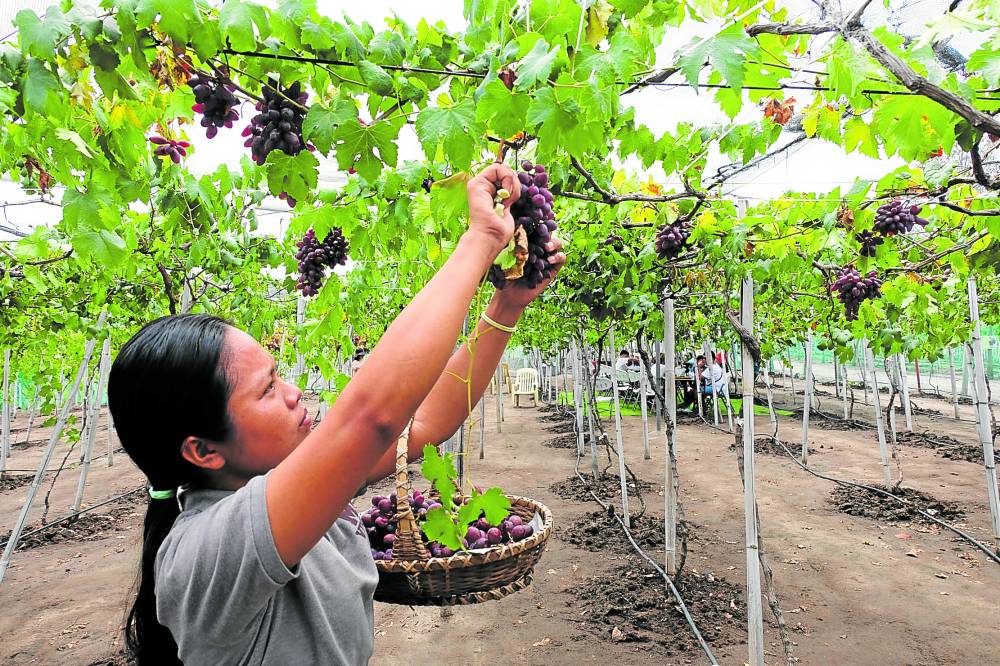 GENERAL SANTOS CITY—Known as the “tuna capital of the Philippines,” this city also proves to be a suitable site for grape production, with an entrepreneur showcasing how such a plant can profitably be grown locally—and all year round at that.

From just a 100-square-meter lot about a decade ago, Maria Caballes’ farm of fruit-bearing vines has already grown to at least 2 hectares, acquired gradually over the years, with more areas for expansion.

The 41-year-old businesswoman has turned a barren land located on the hills of Purok Wal, Barangay Tambler—in a spot that offers a great view of the Sarangani Bay—into a model grape farm known as MBX Grapes Vineyard, now becoming part of the agritourism circuit in General Santos City. Caballes, who once worked in the shipbuilding sector of the tuna industry here, became passionate about grapes after a coworker gave her berries that were harvested “from a grapevine believed to be at least 40 years old and with a trunk as big as a coconut tree.”

She started planting grapes on a 100-sq-m lot in 2012. Seeing its potential, she acquired a half-hectare land in the same village about three years later and planted more grapes, which she calls Farm 1.

Later on, she also acquired the rights to a land measuring up to 15 ha, known as Farm 2, at least 2 hectares of which she developed into a vineyard.

The native of Davao City, however, went full-blast into grape production only when the COVID-19 pandemic broke out in 2020. With the government lockdown imposed starting March that year to stop the spread of the SARS-CoV-2, the virus that causes COVID-19, she and her family members virtually locked themselves up and with nothing much to do, developed Farm 2.Since the place is typically hot during daytime, family members and their farmhands would plant the grapes during late afternoons until the evening, or early the next morning. 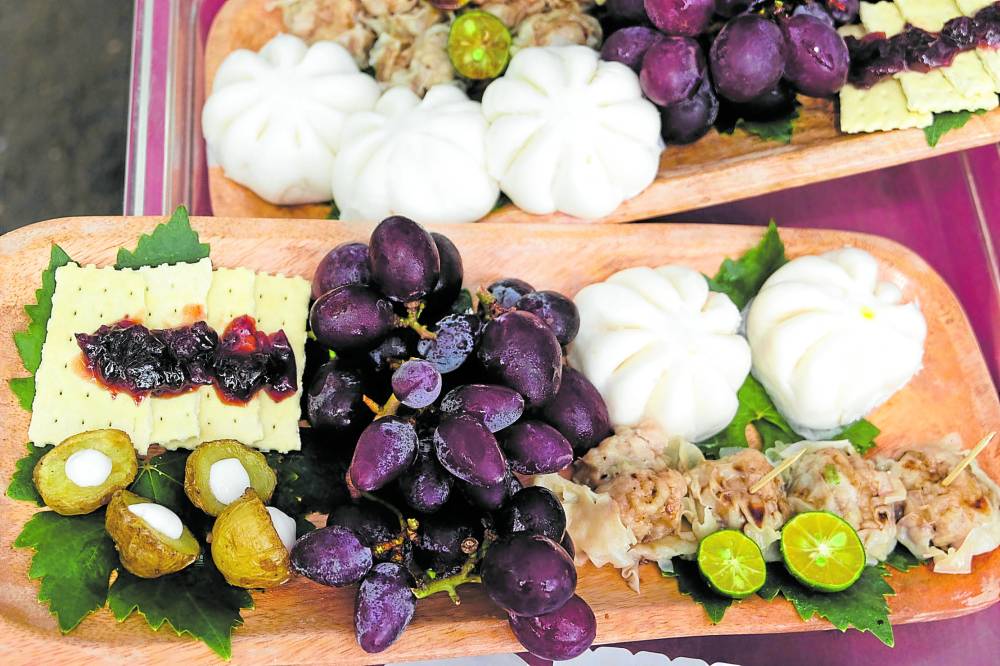 FREE SERVING Apart from dumplings and steamed buns, a complimentary meal at MBX Grapes Vineyard includes, what else, but a serving of grapes. —BONG S. SARMIENTO

Now, two years later, she is reaping the fruits of her labor. Aside from becoming a farm tourism destination, MBX Grapes has been recognized by the Agricultural Training Institute as the only accredited learning site for grape production in Soccsksargen (South Cotabato, Cotabato, Sultan Kudarat, Sarangani and General Santos) region.

“In our farm, visitors can get up close and really personal with our grape fruits. Our grapes are for picking. But if you don’t want to pick and pay, you can still take pictures with the grapes,” Caballes told the Inquirer.

In other grape-producing countries like Italy, famous for their wineries, tourists are not allowed to enter the vineyard due to biosafety protocols, she said. But here visitors are welcome for the experience to really get close with the grapes, she added.

MBX Grapes charges P200 per adult and P100 for a child for farm tours, but the fee already includes a plateful of freshly picked grapes.

Since Caballes programmed the planting of the grapes, their harvest is now all year round, thanks to the 6,000 robust vines dotting their farms. Some of the grape varieties they grow include Everest, Baikonur, Catawba and Kober. Grapes can be harvested six months after planting. These need direct sunlight and regular water feeding. 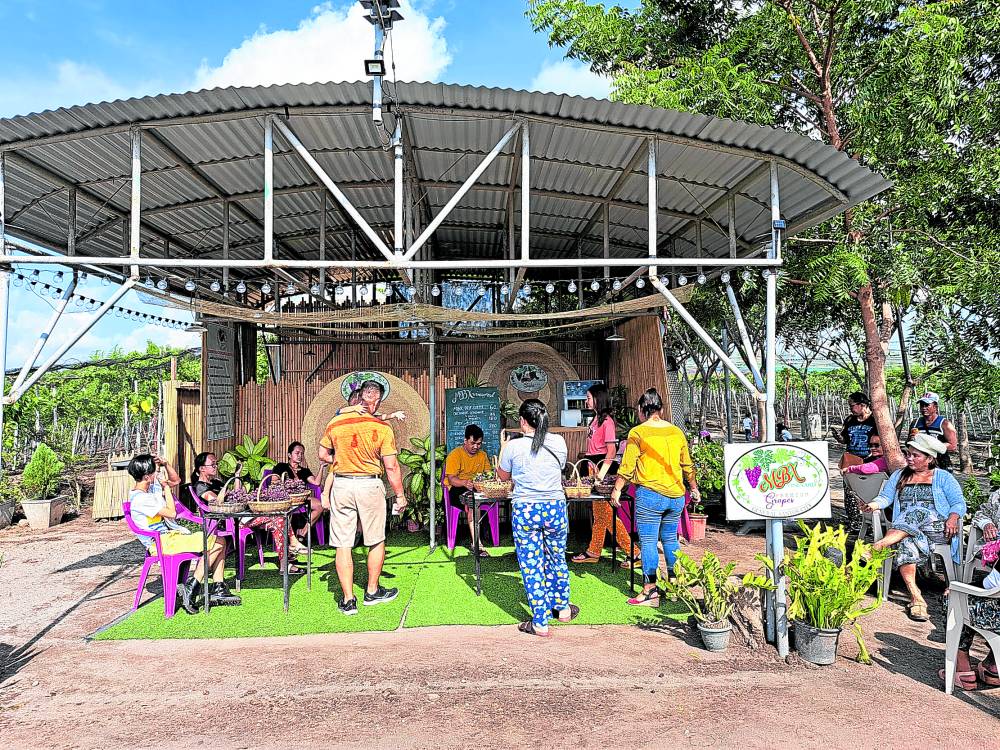 REST AREA Tourists can choose to while their time away at the vineyard’s lounge which has a good vantage of the picturesque Sarangani Bay. —BONG S. SARMIENTO

According to Caballes, a hectare can be planted with 1,500 to 2,000 grape fruits, with each plant yielding between three to 10 kilograms after six months. For just P200 per kilo, that can easily fetch P1.2 million per harvest cycle, she explained.

Noting that grapes can be grown in the southern Philippines, Caballes said that the few grape growers on the island had formed the Mindanao Grape Growers Club, with memberships from Soccsksargen, Davao region and Northern Mindanao.

In this city, MBX Grapes launched the Grapeful GenSan last year, an initiative in which Caballes provided free grape saplings to indigenous communities in a bid to increase local production.

So far, 10,000 seedlings have been dispersed to interested landowners under the program, her way of returning the blessings coming her way.

MBX Grapes produces wines, vinegar and jams from its vineyard. The pick-and-pay grapes cost P600 per kilo. It sells saplings too for those who are interested in planting, the price depending on the size and variety of the seedling, but won’t exceed P1,500.

But Caballes lamented that the local grape production was still barely enough for commercial wine production and for supply to the domestic market.

Caballes said that MBX Grapes encouraged more local farmers to cultivate the crop, saying there would be a big market for it. She said she had proven that it could be successfully cultivated in the area.

Since the start of the COVID-19 pandemic two years ago, she has been spending most of her time in the vineyard, sometimes coming early or leaving late than her 12 employees who are all indigenous peoples.

Caballes, an industrial technology graduate, does not show any regrets in leaving her eight-to-five regular job and jumping into grape farming, a venture previously strange and unimaginable to her.

“I have found my dream retirement,” she said, caressing a bunch of grapes like a prized treasure. INQ