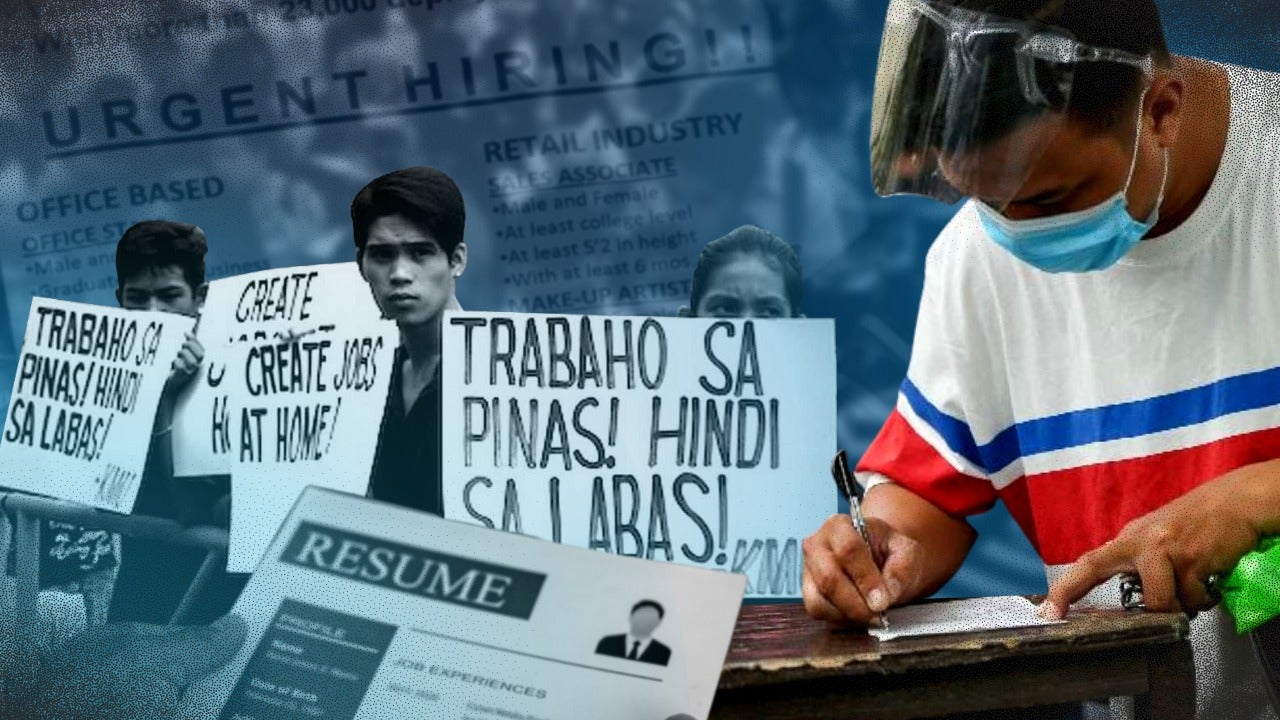 MANILA, Philippines—The ease in joblessness last September, as stressed by the National Economic Development Authority (NEDA), is one of the gains of the resumption of economic activities following nearly two years of COVID lockdowns.

READ: 5% jobless rate in Sept lowest since start of pandemic, under Marcos admin

Socioeconomic Planning Secretary Arsenio Balisacan said “the government will leverage on this momentum by strengthening policy interventions and investing in innovation and technology systems.”

As he stressed in a statement, these interventions and investments are “geared toward generating higher-quality employment that provides adequate income for Filipino workers and their families.”

With the 5 percent jobless rate in September, National Statistician Dennis Mapa said the Philippines is now closer to the pre-COVID full-year average employment rate of 5.1 percent, considering that joblessness had eased for a third month in a row.

But economist Sonny Africa said the only reason unemployment eased was because “millions of discouraged jobless Filipinos are not being counted and millions in pseudo-work are called ‘employed’.”

As stated by the PSA, the Labor Force Participation Rate, which counts working-age Filipinos who have jobs or are looking for jobs, fell by 470,000—from 50.55 million (66.1 percent) last August to 50.08 million (65.2 percent) last September.

Likewise, as the jobless rate dipped to its lowest level in almost three years, the number of employed individuals fell by 287,000 to 47.58 million last September from 47.87 million last August and 43.59 million in the same period last year. 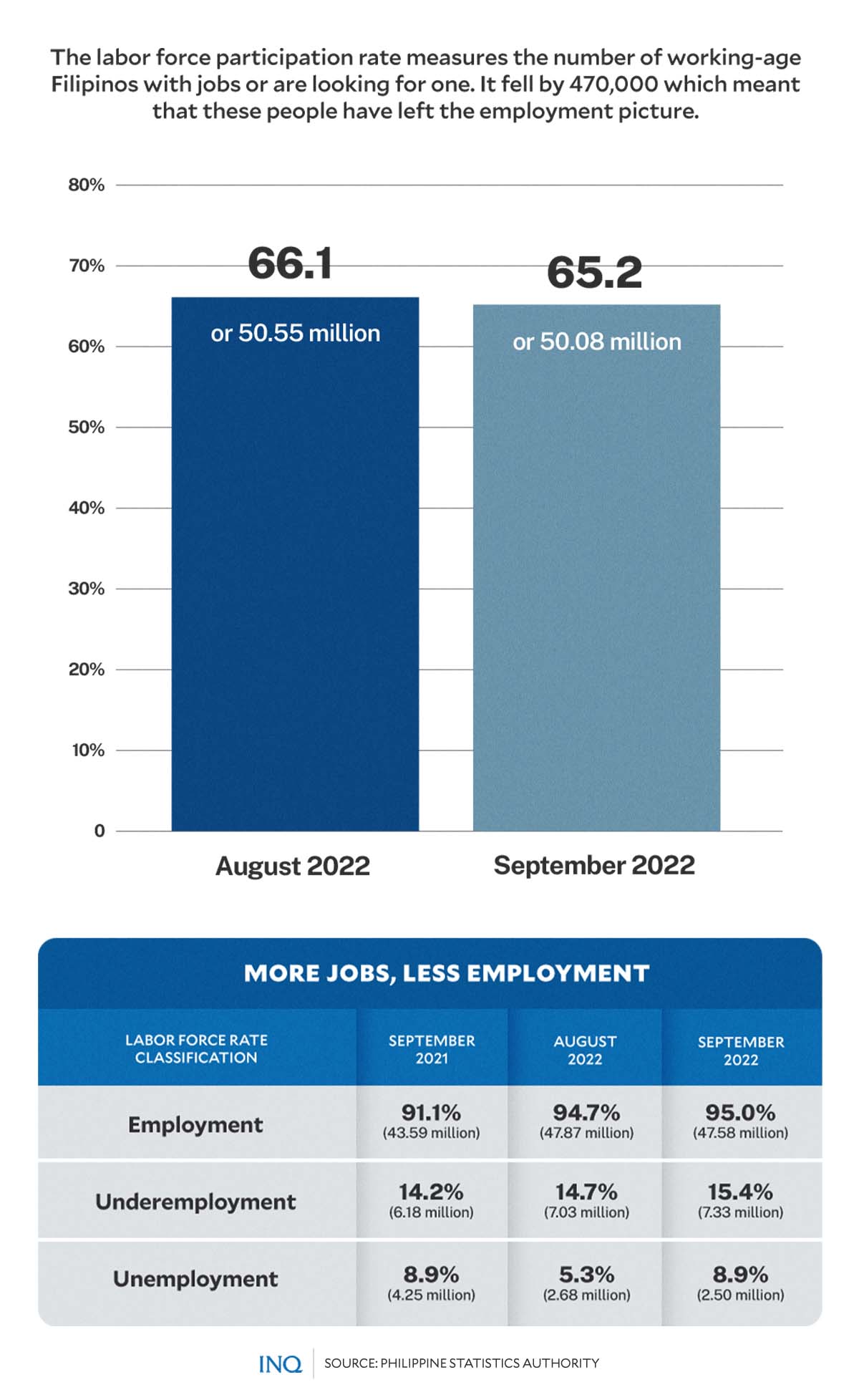 This, even if the employment rate improved to 95 percent from 94.7 percent in August.

“We saw that the labor force participation declined by close to 500,000. The reason for this was a portion of the workforce decided to go back to school since September was the opening of classes.” he said.

Look at the ‘employed’

Reacting to the latest PSA data, Renato Reyes, secretary general of the activist group Bayan, said “we have to ask what is the quality of work being created […] we still lack the heavy and basic industries needed for sustained economic development and job generation.” 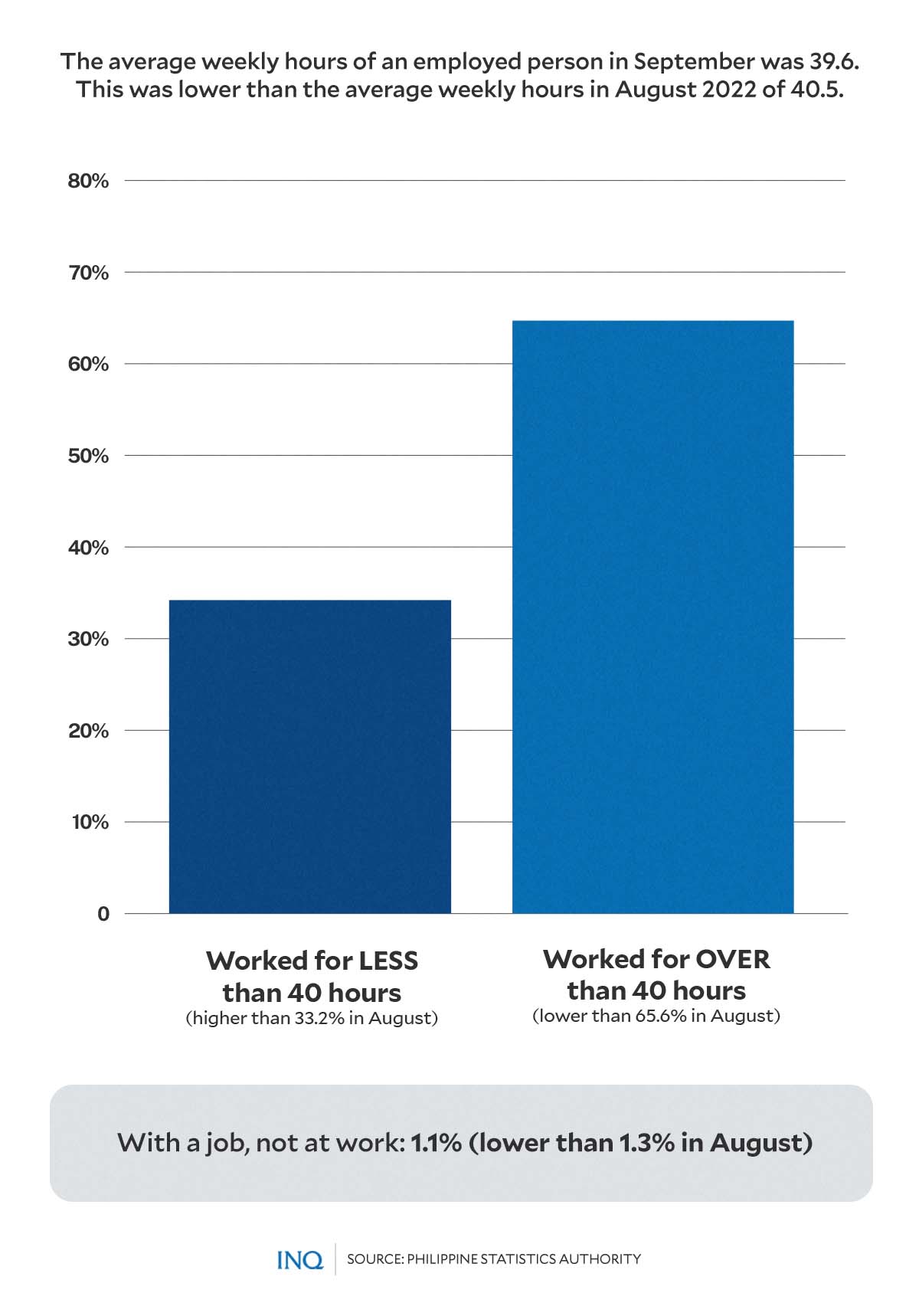 Africa told INQUIRER.net that the drop in the number of employed Filipinos was mainly driven by the decline in full-time work by a huge 610,000 “that was only partially offset by a 378,000 increase in part-time work.”

“It appears that a large part of this decline is from the notable 118,000 drop in wage and salary workers in private establishments, according to employment data by hours worked,” he said.

He stressed that “this draws attention to how economic activity is faltering amid weakening household purchasing power from high inflation and weak family incomes.”

Think tank Ibon Foundation estimated that as of September, as much as 20.2 million, or 4 out of 10 employed Filipinos, are in outright informal work made up of the self-employed, those in small family farms or businesses, domestic help, and those working without pay in their own family-operated farm or business.

According to PSA data, while wage and salary workers increased to 62.2 percent from 61.6 percent in August, the percentage of self-employed and those who are employers in their own family farm or business also grew to 27.4 percent and 2.2 percent. 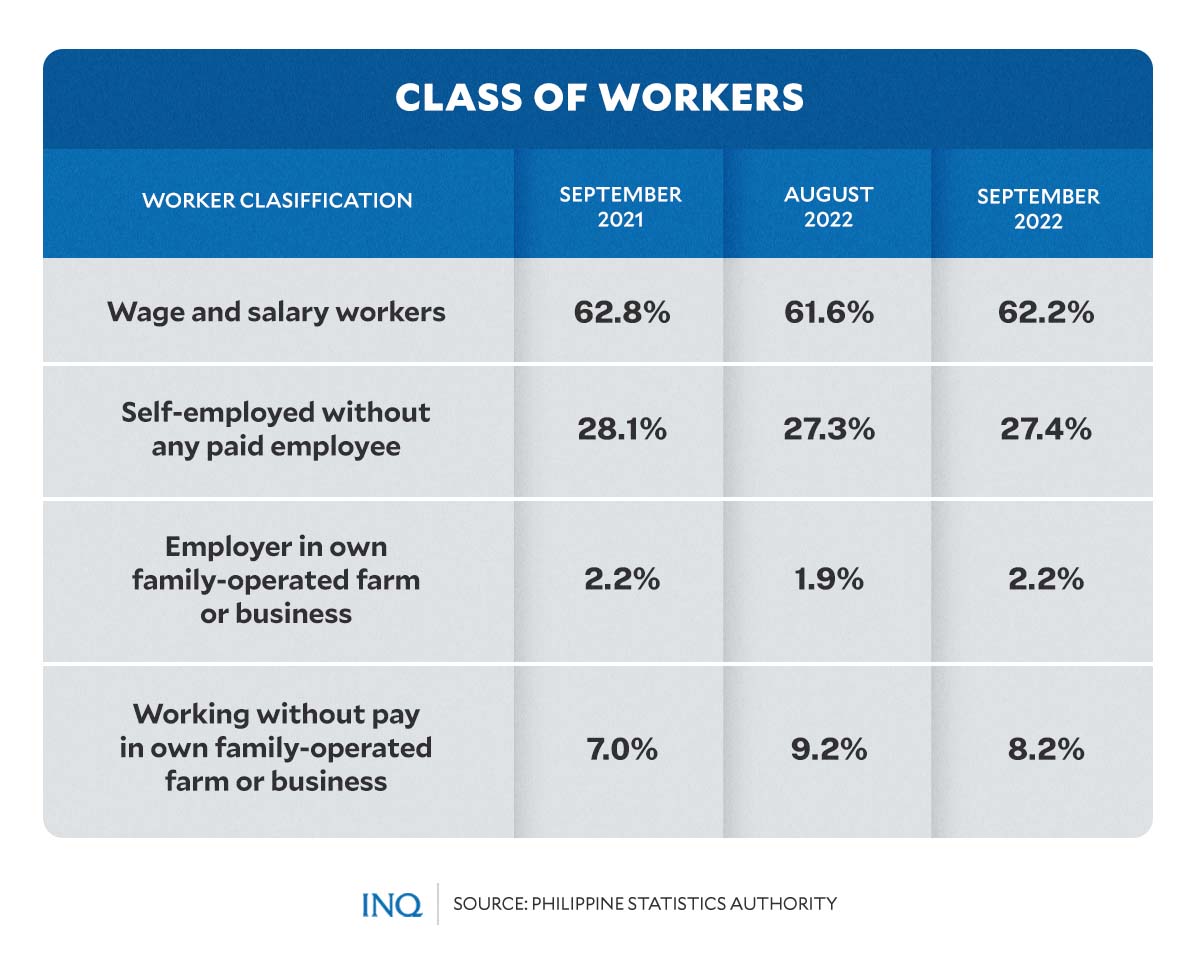 Africa said as it is, compared to the situation before the pandemic in January 2020, 55.9 percent of the increase in supposed employment has been in just part-time work with another 4.2 percent in “with a job, not at work,” while only 40 percent is in full-time work.

As stated by Ibon Foundation, the significant number of Filipinos in outright informal work means that people “are turning to whatever work they can find to support themselves and their families.”

It said the government “should not overly hype the dip in unemployment figures as these only disguise huge numbers of Filipinos struggling to find decent work.”

According to Ibon Foundation, “the poor jobs situation amid high prices is hitting Filipinos hard and could push more into deeper poverty if not arrested.”

This as headline inflation accelerated to its fastest pace in nearly 14 years in October at 7.7 percent, with the PSA saying that the increase was driven by price gains in key commodity groups, particularly food and non-alcoholic beverages.

The PSA said it sees a “substantial probability” that inflation could increase further in November, partly because of the impact of a recent destructive tropical storm.

As stated by the GlobalSource, a New York-based think tank, inflation in the Philippines will likely remain elevated for longer than expected, as upward price pressures in the global food market remain, dragging on the recovery of domestic supplies ravaged by a recent series of typhoons.

“[This] inflation surprise, alongside more recent damages to agricultural output due to typhoons, as well as net upside risks from global and local factors, can be expected to further feed into inflation expectations.”

For Ibon Foundation, the government needs to acknowledge the “dire jobs situation” so it can take meaningful and effective measures to address this and at the same time, help Filipinos cope through much-needed wage hikes and subsidies, cash assistance, and support for small businesses and production sectors.

Recently, the Department of Labor and Employment has ordered the regional wage boards to review whether another round of increase for 4 million minimum wage earners could be imposed next year to cushion the impact of soaring prices of food and other basic commodities.

Read Next
Survivor of South Korea’s Halloween disaster calls for ‘acceptance of fault’ from government
EDITORS' PICK
Shop smarter with vivo’s big 12.12 holiday deals
The vivo Y02 is now available in the Philippines for only PHP 5,299
How not to retire as an ex-president
Hidilyn Diaz wins only gold missing from her collection
House energy committee chair Arroyo bats for cheap electricity
Lawmakers eyeing more changes in Maharlika plan
MOST READ
Jovit Baldivino, ‘Pilipinas Got Talent’ winner, dies at 29
LPA enters PAR, to likely strengthen into tropical depression in coming days – Pagasa
Andi Eigenmann, family in Manila for a quick visit; Ellie dines with grandma Jaclyn Jose
Lawmakers eyeing more changes in Maharlika plan
Don't miss out on the latest news and information.