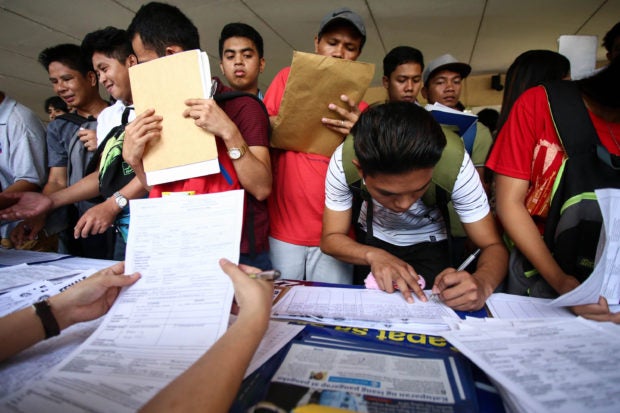 MANILA, Philippines — It’s not necessarily a cause for cheer even if the jobless rate drops. It may suggest a pessimistic view of the labor market is at its root.

At least two activist groups have cautioned against overly praising September 2022’s decreased unemployment rates, claiming that the decline may be attributable to a surge in contractual and informal jobs.

Alliance of Concerned Teachers party-list Rep. France Castro said on Tuesday that unemployment numbers going down from 5.3 percent in August to 5.0 percent may have been brought by the upcoming holiday season — as more jobs are needed during this time of the year.

However, Castro said that such jobs are mostly contractual in nature, and are not permanent sources of income.

“The latest Philippine Statistics Authority (PSA) estimates that 2.5 million Filipinos were jobless in September, a decrease from August’s 2.68 million unemployed may just be the result of the upcoming holiday season and the jobs our workers got were mostly contractual,” Castro claimed.

“Contractual work does not give stable and sustainable income to workers and presents a misleading picture of the true state of joblessness as well as underemployment in the Philippines,” she added.

READ: Jobless rate down to 5% in Sept as schools open

Progressive group Bagong Alyansang Makabayan (Bayan), meanwhile, also said that it is too early to celebrate the decline in unemployment numbers, as the figures do not show the quality of work of the labor force.

“We have to ask what is the quality of work being created. Many are informal or part-time work. Notice that underemployment increased from 14.7% to 15.4%. Around 7.33 million Filipinos say that their current work is not enough to meet their needs,” Bayan secretary general Renato Reyes said.

“There are certain structural and systemic issues in the Philippine economy that contribute to unemployment and underemployment and these cannot be addressed simply by ‘opening’ the economy after the pandemic lockdowns and restrictions. We still lack the heavy and basic. industries needed for sustained economic development and job generation,” he added.

Underemployment is defined as people either doing jobs that would only last for a short period of time or workers on jobs that are way below their capability.

Castro noted that having 15.4 percent of the country’s workers underemployed translates to 7.3 million Filipinos looking for better jobs or employment offerings more suitable to them.

“Even, if the PSA says that the national unemployment rate in September was 5.0%, lower than 5.3% the month prior, it must be noted that the underemployment rate is up to 15.4% in September, equivalent to 7.3 million Filipinos with jobs looking for more work, meaning the jobs they have now are contractual or gives terribly low wages so they have to look for regular employment,” Castro said.

“It would be best if the Marcos administration adopts a true security of tenure law like House Bill 2173, that would protect our workers and uplift our economy especially now that we have runaway inflation,” she added.

Earlier, National Statistician Dennis Mapa said in a briefing that the number of Filipinos of employment age — who were actively looking for a job but failed to get hired decreased by 183,000 from August.

The country currently has 50.08 million working-age Filipinos who do have jobs or were looking for jobs — 470,000 less than the 50.55 million labor force participants in August.

“The unemployment rates in the last three survey rounds [5.2 percent in July, 5.3 percent in August and 5 percent in September ] brings us closer to the pre-pandemic full-year average of 5.1 percent,” Mapa said.