Mabasa kin to authorities: Probe into Lapid murder must go beyond Bantag 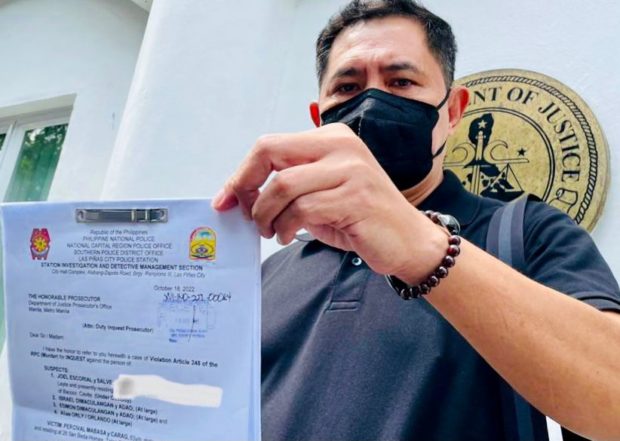 Roy Mabasa, the victim’s brother, appeared before the DOJ and subscribed to the complaint-affidavit against Joel Escorial and the three others. INQUIRER.net file photo / Tetch Torres-Tupas

In an interview over Inquirer.net’s InqToday, Lapid’s brother Roy Mabasa, said that their family will not stop until all masterminds behind the assassination of Lapid have been identified and justice is served.

(I just want to be clear, the family will not stop looking for justice for Ka Percy, we are not convinced right now that this case is only up to Bantag because if we look at the whole scheme of Ka Percy’s death including the middle man, there was too much and too much conspiracy that happened inside and outside the prison.)

Mabasa said that he believes a deeper investigation in the case may provide even more answers, revealing even more masterminds behind the murder.

He explained that even Justice Secretary Jesus Crispin Remulla himself said that the case is still only 95 percent solved.

(Maybe one of these days because this case is still developing we will believe that the truth will come out.)

(…all that’s possible I’m not stopping from there, our family won’t stop until the mastermind is really identified.)

This came after the National Bureau of Investigation (NBI) earlier filed murder complaints against Bantag, BuCor Deputy Security Officer (DSO) Ricardo Zulueta and other persons deprived of liberty (PDLs) linked to the death of Mabasa and alleged conspirator Cristito Palaña, earlier referred to as Jun or Crisanto Villamor.

When asked what convinced him that those identified in the slay case are truly involved in the death of his brother, Mabasa answered that it was due to the evidence authorities presented through the Anti-Money Laundering Council (Amlac).

He said a record from the Amlac proved that the suspects identified in the case all received money in their bank accounts — all of which came from gang leaders within New Bilibid Prison who deposited the money through their allies or family members outside the penal facility.

(The report is very good, for me it was one of the most convincing pieces of evidence that I have seen here in this whole scheme, that proves what the gunman is saying is right, what the gang leaders are saying is right because it matches the number of money.)

He added that the identities of those who deposited the money are also being investigated.

Mabasa in the same interview then expressed his thanks to the involved government agencies who helped in the investigation of the murder, as well as to the listeners of Lapid.

He called the identification of Bantag and 13 others as suspects a “celebration,” as not only did Percy’s case led to reform in the corruption-infested BuCor, but also a symbol to other journalists who were killed.

(So the death of Ka Percy will provide us with so many opportunities for reforms and maybe it’s a wakeup call to the government to address the problem head on.)

(We will not stop, we will continue to fight because this is not only Ka Percy’s fight, it is a fight for all the journalists who were murdered.)

Lapid died after he was gunned down by motorcycle-riding men while inside his car at a gate of a Las Piñas City subdivision where he lived.