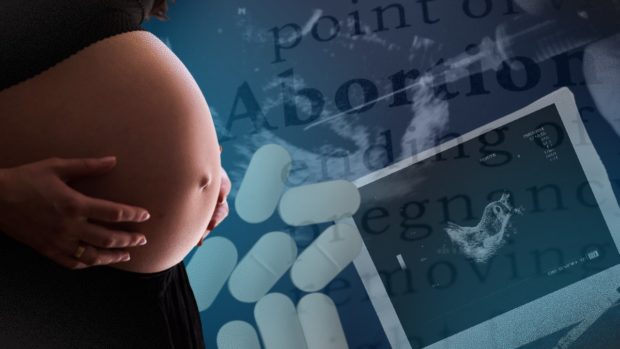 MANILA, Philippines—The United Nations Human Rights Committee (UNHRC) called on the Philippine government to decriminalize abortion and improve sexual and reproductive health services such as post-abortion healthcare in the country.

UNHRC, in a recently released concluding observation at its 136th session, said it acknowledged the Philippines’ “efforts to reduce unsafe abortion and maternal mortality.”

However, UNHRC also stressed its longstanding concern over the criminalization of abortion in the Philippines, which pushes women to undergo induced, unsafe abortion services that endanger their lives and health.

In the country, where most of the population is Catholic, abortion is still not permitted, illegal, and punishable under the law. 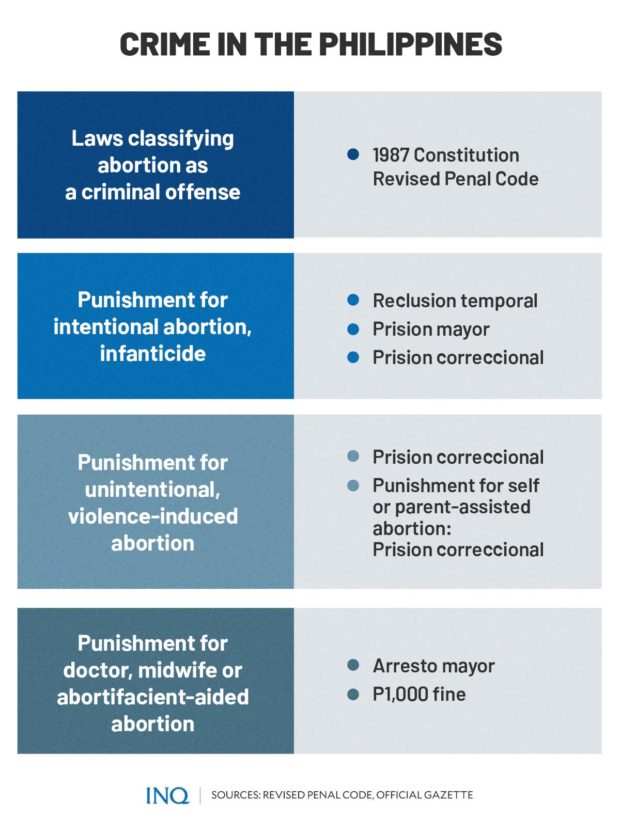 The country’s current provisions on abortion are based on two legislations: Article II, Section 12 of the 1987 Constitution, and Articles 256-259 of the Revised Penal Code of the Philippines.

UNHRC “also notes with concern information about the insufficient primary health care facilities and the significant increase in indirect obstetrical deaths during the COVID-19 pandemic, due in part to the lack of health care capacity.”

“It notes with concern the high number of unintended pregnancies, especially among adolescent girls,” it added.

In its recommendations on the voluntary termination of pregnancy and reproductive rights in the Philippines, UNHRC noted that the government should revise laws to “guarantee safe, legal and effective access to abortion where the life and health of the pregnant woman or girl is at risk, or where carrying a pregnancy to term would cause the pregnant woman or girl substantial pain or suffering.” 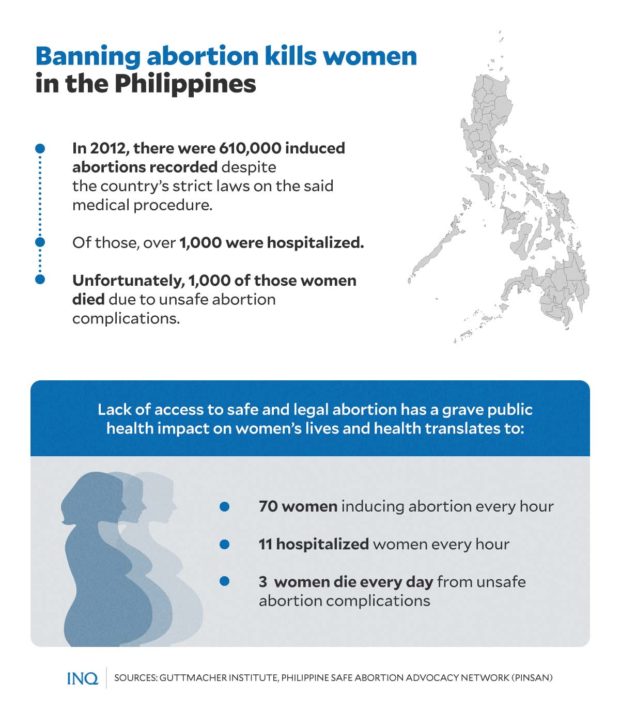 It pushed for the repeal of criminal penalties imposed on women and girls who undergo abortions and medical service providers who help them to do so.

UNHRC also recommended improvements in sexual and reproductive health services “including post-abortion health care in all circumstances on a confidential basis, especially for rural women, women living in poverty, women with disabilities and women from ethnic or religious minorities.”

Comprehensive sexual and reproductive health education programs should also be further developed and implemented to prevent unintended pregnancies and stigmatization of women and girls who undergo abortion—as well as to avoid sexually transmitted infections.

In the Philippines, there were 610,000 induced abortions recorded in 2012 despite the country’s strict laws on the medical procedure.

Over 100,000 of those Filipino women who induced abortion that same year were hospitalized, according to a study by the Guttmacher Institute—a research group that supports access to abortion.

Unfortunately, 1,000 of those women died due to unsafe abortion complications.

According to the Philippine Safe Abortion Advocacy Network (PINSAN), the 2012 statistics show that lack of access to safe and legal abortion has a grave impact on women’s lives and health, translating to:

The increase continued through 2020, when it was estimated to reach over 1.26 million.

“The country’s restrictive laws on abortion have not prevented abortion and have only made it extremely unsafe, leading directly to the preventable deaths of thousands of women each year,” said PINSAN.

“As long as abortion is restricted in Philippine law and people impose their religious morality on women seeking life-saving abortion care, women will die and suffer disability from complications from unsafe abortion,” lawyer Clara Padilla, spokesperson of PINSAN, said in a statement earlier this year. 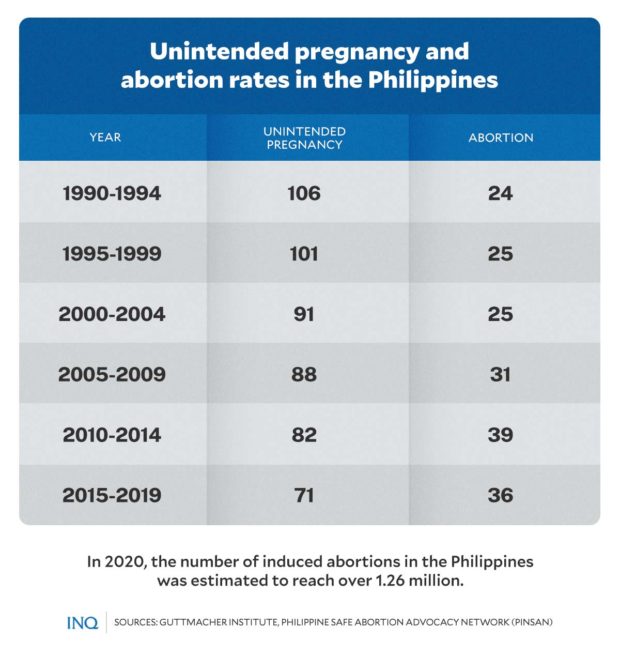 Padilla, who is also the founder and executive director of EnGendeRights—a nonprofit organization that advocates for women’s rights—released this year a statement that listed over 20 reasons the Philippine government must decriminalize abortion.

Padilla also cited the social costs of the country’s lack of access to safe abortion and post-abortion care as one of the reasons the government must decriminalize abortion.

According to her, decriminalizing abortion could help the government save over half a billion pesos “since induced abortion services cost less than treatment of unsafe abortion complications.”

The other reasons cited by Padilla were:

Padilla also cited the “constitutional guarantee on separation of church and state and non-establishment of religion.”

“Maintaining the restrictive abortion law would violate the principle of separation of church and state and would be tantamount to the establishment of religion—allowing certain religious groups to influence our laws, governance, and impose their beliefs on the entire Philippine population in violation of the constitutional guarantee on non-establishment of religion,” she said. 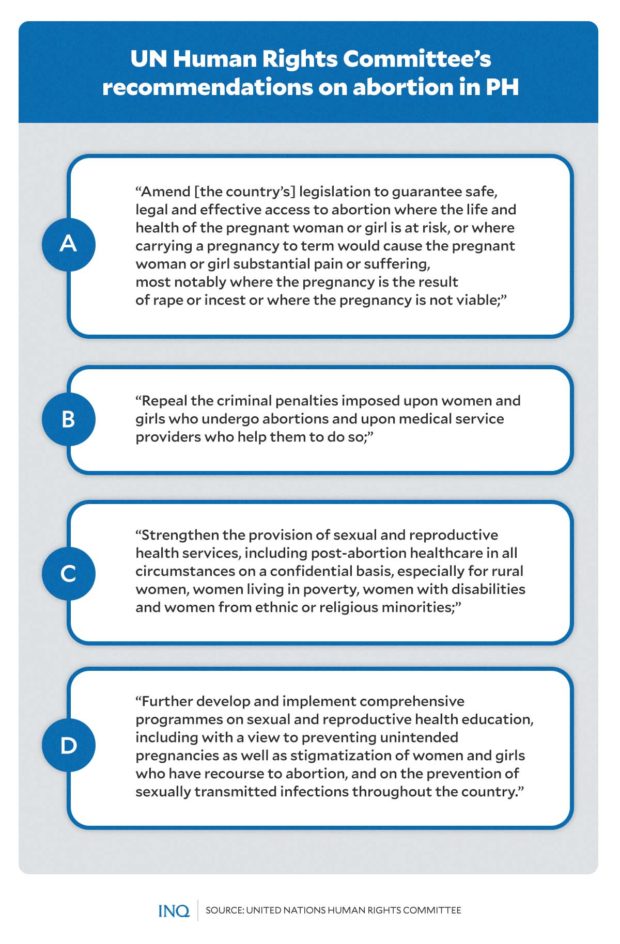 “This would infringe on the right to freedom of religion of women and health providers who want to provide health care to their patients,” she added.

Padilla, along with PINSAN, also drafted a bill to decriminalize abortion, which further discussed key points and reasons that the government must lift penalties imposed for the medical procedure.

Read the draft of the proposed bill here:

“We believe that this proposed bill will save women’s lives when passed. The country’s restrictive laws on abortion have not prevented abortion and have only made it extremely unsafe, leading directly to the preventable deaths of thousands of women each year,” PINSAN said in a statement released on June 2020.

“We at PINSAN would like to encourage sincere and good faith discussions on the abortion situation in the country, discussions based on facts and evidence that are sound, scientific, and, most importantly, sensitive to the needs and experiences of women, girls, and other gender identities with reproductive capacities at various, intersecting vulnerabilities—including physical, mental, and socio-economic vulnerabilities, among others,” the organization added.

“We believe it is high time the Philippine government decriminalize our antiquated and restrictive law on abortion, in compliance with its international human rights obligations and women’s right to equality and non-discrimination.”

READ: Abortion: 2 sides of the coin