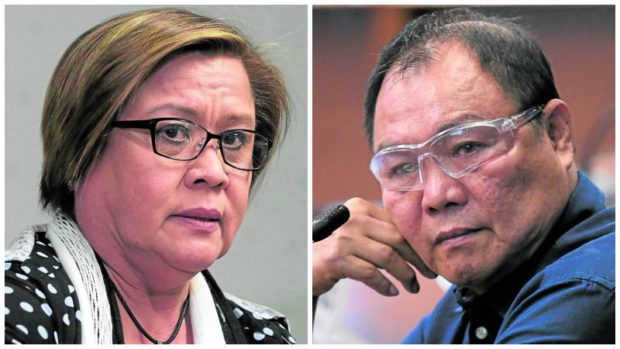 Ragos was a witness against de Lima in a drug charge before the Muntinlupa City RTC. But he recanted his testimony.

As he testified in court during Friday’s hearing, Ragos said he was coerced into signing prepared affidavits on three occasions in 2016 and 2017 to say that de Lima, a former Justice Secretary, has been receiving bribe money from drug lords at the New Bilibid Prison.

READ: Ragos: I was forced thrice to sign affidavits vs De Lima

The prosecution previously blocked Ragos’ testimony saying it was “untrustworthy and frowned [upon in] our jurisdiction.”

But the court said it would be best to test the witness’ credibility and cross-examine the recanting witness.

Atty. Michael de Castro said Ragos told the court that he got scared for his and his family’s safety and career when he was given a warning for hesitating to sign the affidavit.

At the trial break, de Lima was going back inside the court when Ragos standing at the door, told the former senator: “I am really sorry. Natakot talaga ako [I got really scared].”

Aguirre denied the allegations and said he had a video to prove it.

Calling Ragos a “liar,” Aguirre told reporters that a video taken by the Public Attorney’s Office showed the former supposedly testifying freely and voluntarily against de Lima when he made a supplemental affidavit on September 26, 2016.

Aguirre also said he was not present when the video was taken, and that he came to know of the recording “only a few days ago.”

Aguirre told reporters that he was prompted to answer Ragos’ allegation anew when he heard that the former BuCor chief had affirmed his recantation before the sala of Muntinlupa City RTC Branch 204 Judge Abraham Joseph Alcantara.