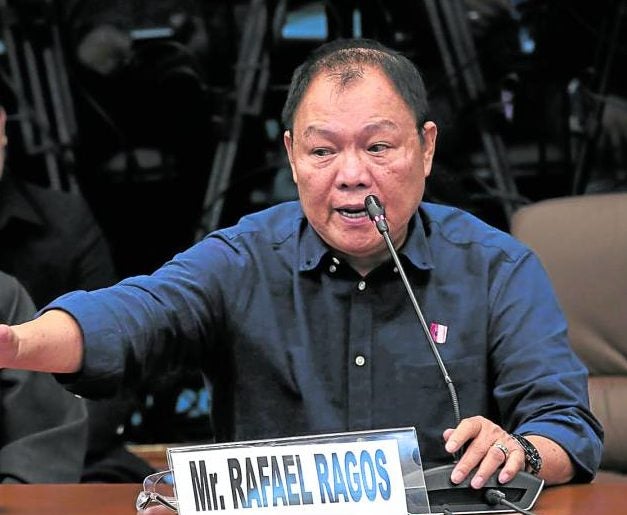 U-TURN | Former Bureau of Corrections chief Rafael Ragos appears at a Senate hearing in this photo taken on Sept. 12, 2019. He served as a key prosecution witness that year in the De Lima drug case, but made an off-court retraction in April this year. —INQUIRER FILE PHOTO

MANILA, Philippines — Rafael Ragos, the former corrections bureau chief who accused former Sen. Leila de Lima of receiving bribes from prison drug lords but recanted his claims in April, may take the stand again during her trial, a Muntinlupa court ruled on Tuesday.

Judge Abraham Joseph Alcantara of the Muntinlupa Regional Trial Court Branch 204 cited lack of merit in denying the motion of Department of Justice (DOJ) prosecutors to block Ragos, a former officer in charge of the Bureau of Corrections (BuCor), from formally disavowing his previous testimony.

Ragos’ retraction, according to the court, should be “tested of its value in a public trial with sufficient opportunity given to the prosecution to cross-examine the recanting witness.”

“The court should determine which testimony should be given credence through a comparison of the original testimony and the new testimony, applying the general rules of evidence,” it said.

Ragos was unable to testify during De Lima’s trial on Sept. 30 after the prosecution asked the court to reconsider its order to allow recalling him as a witness as that would be erroneous in procedure and “a mockery of justice.”

The DOJ lawyers argued that a recantation was “untrustworthy and frowned upon in our jurisdiction.”

But in his four-page order, Alcantara sided with the defense lawyers, finding that the prosecution’s motion “raises no new matters and issues which have not already been considered and passed by this court in its order.”

In separate comments, lawyers for De Lima and her former aide and coaccused Ronnie Dayan argued that Ragos’ testimony would help uncover the truth on the illegal drug trade at New Bilibid Prison (NBP) in Muntinlupa City.

“[U]nless the prosecution aims to suppress facts or conceal witnesses capable of establishing the truth, there is more reason for the prosecution to support or even initiate the recall of Mr. Ragos as a witness,” Haidee Soriano, counsel of Dayan, said.

“[T]he prosecutors should not be fixated on convicting the accused but rather ensure that justice is done. Disappointingly, the prosecutors would rather suppress the testimony of Rafael Ragos and block the truth about the accused’s innocence from coming out,” he said.

In May, Ragos made public an affidavit he executed on April 30 retracting his previous statements in court and congressional hearings that he delivered drug money to De Lima’s residence in 2012, when she, as then justice secretary, exercised jurisdiction over BuCor.

He said it was former Justice Secretary Vitaliano Aguirre II and his subordinates who had forced him to make the false claims, a charge the latter denied.

In 2019, Ragos testified in court that he personally delivered money from NBP convicts to De Lima’s residence in Parañaque City on two occasions, on Nov. 24, 2012, and on Dec. 15, 2012, for her senatorial candidacy. But De Lima ran for a Senate seat only in the 2016 elections. Ragos also claimed he transacted with Dayan for her to receive P5 million.

This was a repeat of his statements made under oath during House and Senate hearings in 2016.

Retracting those accusations, Ragos said in his April 30 affidavit that “[a]s far as I know and based on my professional relationship with Secretary De Lima, she is incapable of doing anything illegal, much less engage in the illegal drug trade or accept money from Bilibid inmates.”

“All of my allegations to the contrary in my affidavits and House and court testimonies are all fiction, false, and fabricated,” the former BuCor chief wrote.

His retraction followed that of confessed drug lord Kerwin Espinosa, who was the first to recant his earlier accusations against De Lima in April. Then in May, Dayan, too, said he had been coerced into claiming he received drug payouts on De Lima’s behalf during a House investigation in 2016.

De Lima, a leading critic of the drug war of President Ferdinand Marcos Jr.’s predecessor Rodrigo Duterte, has been detained at the Philippine National Police Custodial Center in Camp Crame, Quezon City, since 2017, on drug charges that her camp and human rights groups say were fabricated.

On Oct. 9, De Lima was briefly taken hostage by one of three suspected members of the Abu Sayyaf Group who tried to break out of the facility. All three were killed while the former senator was unhurt.