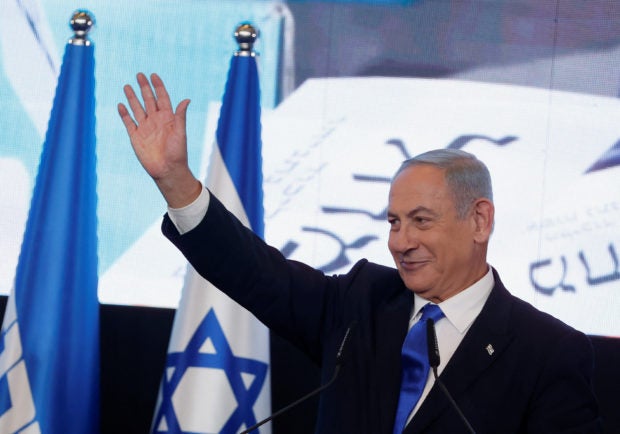 JERUSALEM — A near-final tally of votes on Thursday showed former Israeli Prime Minister Benjamin Netanyahu on track to reelection with a clear parliamentary majority boosted by ultranationalists who want tougher crackdowns on Palestinians.

Tuesday’s ballot saw out the centrist incumbent, Yair Lapid, and his rare alliance of conservatives, liberals, and Arab politicians which, over 18 months in power, had made diplomatic inroads with Turkey and Lebanon and kept the economy humming.

But with the conflict with the Palestinians festering and touching off Jewish-Arab tensions within Israel, Netanyahu’s rightist Likud and kindred parties took 65 of the Knesset’s 120 seats, according to a vote count due to conclude on Thursday.

“The time has come to impose order here. The time has come for there to be a landlord,” tweeted Itamar Ben-Gvir of the far-right Religious Zionism party, Likud’s likely senior partner in the next government.

Ben-Gvir was responding to the latest violence, in which police said a Palestinian stabbed an officer in Jerusalem’s Old City and was shot dead. Earlier, Israeli troops killed a Palestinian during a confrontation in the occupied West Bank.

However, with Netanyahu still not officially confirmed as prime minister, it is still unclear what position he might hold in a future government.

Though Netanyahu has vowed to serve all citizens, his ascendancy has set off worries among the 21% Arab minority and centre-left Jews – and especially among Palestinians whose U.S.-sponsored statehood talks with Israel broke down in 2014.

“We hope that all Israeli government officials will continue to share the values of an open, democratic society, including tolerance and respect for all in civil society, particularly for minority groups,” the spokesperson said.