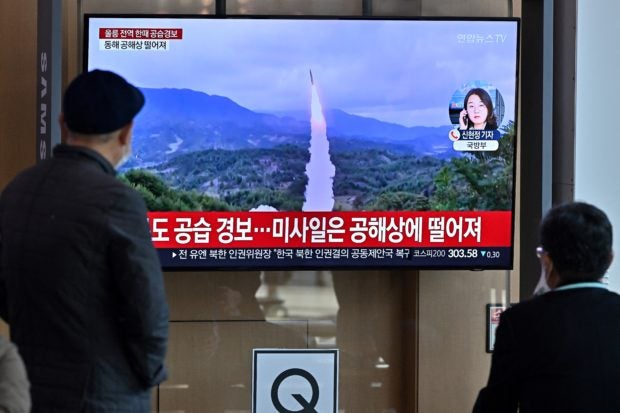 People watch a television screen showing a news broadcast with file footage of a North Korean missile test, at a railway station in Seoul on November 2, 2022. – South Korea on November 2 told residents on the island of Ulleungdo off its east coast to evacuate to bunkers after North Korea fired three short range ballistic missiles. (AFP)

Seoul’s military said it had detected “one long-range ballistic missile, which is believed to have been launched into the East Sea from around 07:40 am (2240 GMT) in Sunan area of Pyongyang,” it said, referring to the body of water also known as the Sea of Japan.

Shortly after, it detected what were “believed to be two short-range ballistic missiles fired at around 08:39 am from Kaechon, South Pyongan province,” it added.

South Korea’s military “is maintaining a full readiness posture while closely cooperating with the US and strengthening surveillance and vigilance,” it added.

The launches come a day after Pyongyang fired more than 20 missiles, including one that landed near South Korea’s territorial waters.

Pyongyang’s multiple missile launches come as Seoul and Washington are staging their largest-ever joint air drills, involving hundreds of warplanes from both sides.

Local media reported that air raid sirens had gone off on South Korea’s eastern island of Ulleungdo — where residents were warned on Wednesday to seek shelter after one of Pyongyang’s short-range ballistic missiles crossed the de facto maritime border.

Tokyo also confirmed Thursday’s launches, with the Japanese government issuing a special warning to residents of northern regions shortly before 8 am (2300 GMT), telling them to stay indoors or seek shelter.

Tokyo initially said the missile had flown over Japan, prompting a “J-Alert” to be issued, but defence minister Yasukazu Hamada later said “the missile did not cross the Japanese archipelago, but disappeared over the Sea of Japan.”

“Latter could be very worrying for some if it successfully goes a significant distance.”

Washington and Seoul have repeatedly warned that Kim’s recent missile launches could culminate in another nuclear test — which would be Pyongyang’s seventh.

The blitz of launches indicates “Quite possible tactical nuclear weapons test(s) will be next. Possibly very soon,” O’Carroll added.

“They also seem like a series of practical tests for their tactical nuclear deployment.”

It was first time North Korea had fired a missile over Japan since 2017.

Pyongyang later claimed that the launch and a blizzard of other tests around the same time were “tactical nuclear drills” that simulated showering South Korea with nuclear-tipped missiles.

Pyongyang has called the ongoing US-South Korean air exercise, dubbed Vigilant Storm, “an aggressive and provocative military drill targeting the DPRK,” and warned that, if it continues, Seoul and Washington will “pay the most horrible price in history.”

One short-range ballistic missile crossed the Northern Limit Line, the de facto maritime border, on Wednesday, prompting the rare warning for residents of Ulleungdo island to seek shelter in bunkers.

President Yoon Suk-yeol said it was “effectively a territorial invasion”.

South Korea also closed some air routes over the East Sea, advising local airlines to detour to “ensure passenger safety in the routes to the United States and Japan”.

Pyongyang also fired an artillery barrage into a maritime “buffer zone” that experts said was part of an “aggressive and threatening” response to the joint US-South Korean drills.

South Korea, for its part, said it fired three air-to-ground missiles into the sea close to the two countries’ maritime boundary.

North Korea revised its laws in September allowing for pre-emptive nuclear strikes, with leader Kim declaring the country to be an “irreversible” nuclear power — effectively ending negotiations over its banned arms programs.