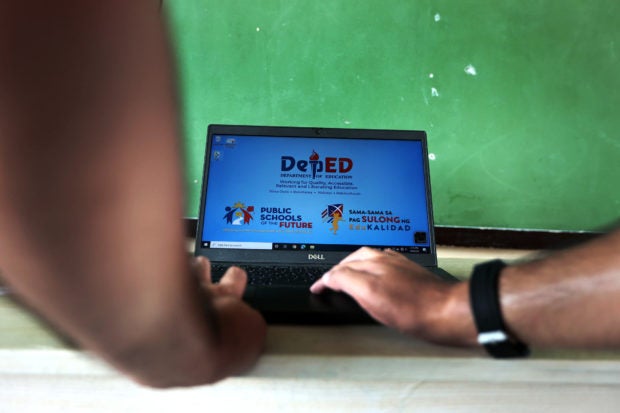 TOTAL RECALL | All laptops “borrowed” by teachers, such as the one in the picture, will have to be returned to their respective schools, according to the Department of Education. (INQUIRER FILE PHOTO)

MANILA, Philippines — Recalling the laptops distributed to public school teachers for distance learning amid the pandemic will be an “additional problem” for educators since they will lose the devices they are using to prepare lectures, reports and online tasks, the Alliance of Concerned Teachers (ACT) said on Tuesday.

“What they should be working on is filling up their backlogs in laptop provision to teachers and not increasing further the number of teachers who [have] no laptop to use,” Quetua said in a statement.

DepEd spokesperson Michael Poa earlier said that the Schools Division of Quezon City denied the reports of laptop retrieval but could not immediately confirm those in other places mentioned by ACT.

ACT said in a statement that “all gadgets” lent out to teachers in Zamboanga del Sur were to be collected from Nov. 2 to Nov. 4.

At Ernesto Rondon High School in Quezon City, laptop retrieval will be on Nov. 4, the statement said.

Poa later on clarified that the laptops had to be returned to their respective schools as full in-person classes had already resumed and that these were to be used in their computer laboratories.

In the Digital Rise Program under former Education Secretary Leonor Briones, the digital literacy component of the K-12 curriculum was introduced to Grade 4 to Grade 6 students using tools like word processing, spreadsheets and presentations.

Grade 7 students learn basic programming skills subjects while Grades 8 to 10 have subjects that include video editing and graphics design.

Jenilyn Corpuz, Quezon City schools division superintendent, said in an interview with GMA News on Wednesday that the teachers had to return the gadgets because these were just “borrowed” from the schools.

On Sept. 12, Corpuz issued Division Memorandum No. 596 directing “all desktop computers, laptops, tablet PCs and smartphones, which the school heads lent to the school teachers shall also be returned to the school custodian.”

The gadgets would be stored in the school for safekeeping, the memo said, and they would only be available for the official use of teachers “upon request.”

She cited an April 2020 DepEd memorandum from then Education Undersecretary for Administration Alain del Pascua which said that teachers were “required to return the said devices upon the resumption of regular classes.”

Given by local gov’t

Quetua was dismayed over the move to recall the laptop by DepEd.

“When will the Department of Education understand that it is the agency’s responsibility as the employer to provide each of its teachers with the necessary equipment for them to be able to perform their duties?” he added.

The DepEd and the Quezon City government have been distributing laptops to public school teachers.

At the onset of the pandemic in 2020, Quezon City Mayor Joy Belmonte allotted more than P124 million from the LGU’s special education fund to purchase 3,210 laptops and other equipment for use by elementary and secondary public school teachers.

Last month, Quezon City turned over an additional 1,000 new laptop units to teachers and another 50 laptops for day care centers.

As for private schools, not all provide laptops or electronic gadgets to their teachers, according to Eleazardo Kasilag, president of the Federation of Associations of Private Schools and Administrators.

The Senate blue ribbon committee recently terminated its investigation of the DepEd’s purchase of allegedly overpriced but outdated laptops amid the pandemic, with Sen. Francis Tolentino convinced that there was a “conspiracy” behind the procurement.

The issue stemmed from the Commission on Audit’s annual audit report which found that the largest government agency bought P2.4 billion worth of “pricey, entry-level type laptop” through the Procurement Service of the Department of Budget and Management.

The state auditors said the purchase of overpriced laptops “adversely decreased the number of intended beneficiaries from 68,500 to 39,583 public school teachers.”