IT'S ONLY WHEN SOMETHING EXPLODES THAT PS-DBM EXECS PASS THE BLAME AND RESPONSIBILITY AROUND LIKE A BASKETBALL GAME, SAYS PIMENTEL
By: Daphne Galvez - Reporter / @DYGalvezINQ
INQUIRER.net / 04:03 PM August 25, 2022 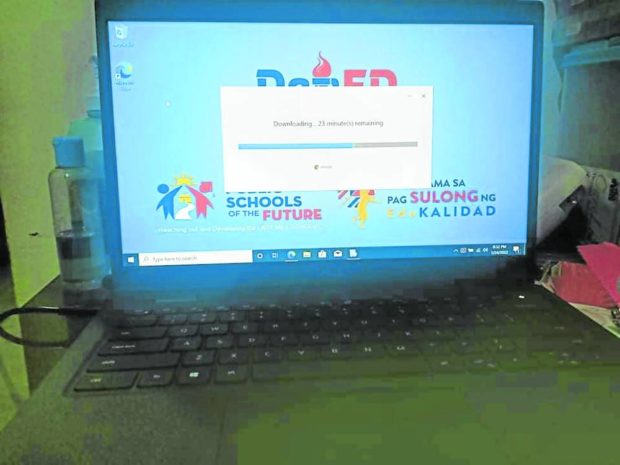 MANILA, Philippines — A member of the Procurement Service of the Department of Budget and Management (PS-DBM) on Thursday admitted “missing out” on some details on the price analysis for the allegedly “overpriced” laptops bought by the Department of Education (DepEd) for teachers during the pandemic.

During the Senate Blue Ribbon Committee hearing, Senate Minority Leader Aquilino “Koko” Pimentel III asked why the word “complied” was indicated in the price analysis document of PS-DBM when the laptops failed to meet the required speed of 1.9 gigahertz (GHz).

Pimentel said that the laptop supplier has said that the gadgets only have a base frequency of 1.2ghz “to leverage the latest generation of intel.”

However, in the price analysis, the PS-DBM said that the supplier’s laptops “complied” with the required 1.9 GHz specification.

(They said they lowered the speed to leverage the latest generation intel, but the price analysis noted that the laptops complied with the required specifications. Of course, you could just have copied what the suppliers said; why wasn’t it done in this case?)

Pimentel first addressed the question to Abram Abanil, a member of the PS-DBM’s special awards and bids committee. However, the latter said he could not comment on the document, even though he signed a conforme.

Abanil explained that it was not him but the PS-DBM’s technical working group that prepared the price analysis, and he had just signed it.

“I trusted the technical working group made their due diligence in terms of conducting a price analysis. Nakita ko naman sa mga document na mataas na ‘yung presyo,” he explained during the hearing.

(I saw in the document that the price increased.)

“Ito lang pinakita sa akin na document when we were doing the review so that was also the basis of my signature,” Abanil added.

(My signature was based on the only document shown to me during the review.)

“It’s like a basketball game,” says Pimentel, as PS-DBM officials pass blame and responsibility around.

“May layo talaga sa PS-DBM. Hinahanda ang mga items na mananalo eh, maybe that could be one of the conclusions. Welcome to the basketball game that we do not see. We only get to see it pag may sumabog na,” he said.

(There is really a game at the PS-DBM. They are preparing the items that will win. That could be one of the conclusions. Welcome to the basketball game that we do not see. We only get to see it when something explodes.)

Pimentel then directed his query to Marwan Amil, a member of the PS-DBM’s special awards and bids committee, who admitted to being one of the persons to have prepared the price analysis.

Amil admitted that the technical working group “missed out on the statement of compliance of the supplier.”

“We did not see it directly. We have a mistake there. We didn’t see it properly,” he said in the hearing.

This answer prompted Pimentel to criticize the system in the PS-DBM, saying the “system doesn’t work.”

(Theoretically, on paper, they should have a system and a review so that nothing will be missed out. However, during the study, the reviewer has a proxy who will sign the form, resulting in missing out of some details.)

“Now we have this from the procuring entity or the requiring agency, nag-conforme rin si Abanil, trusting that the entire system works but the system doesn’t work,” Pimentel added.

“Sa preparation missed out, sa review, ‘I do not review, I have a proxy so I can pass the ball ‘pag may sumabog.’ Yan ang problema,” he continued.

(In the preparation, they say they missed it out. Then, when reading the review, they say ‘I have a proxy so I can pass the ball when something happens.’ That’s the problem.)

The Senate blue ribbon committee is investigating the DepEd’s procurement of allegedly overpriced laptops for the teachers during the implementation of blended learning during the COVID-19 pandemic.