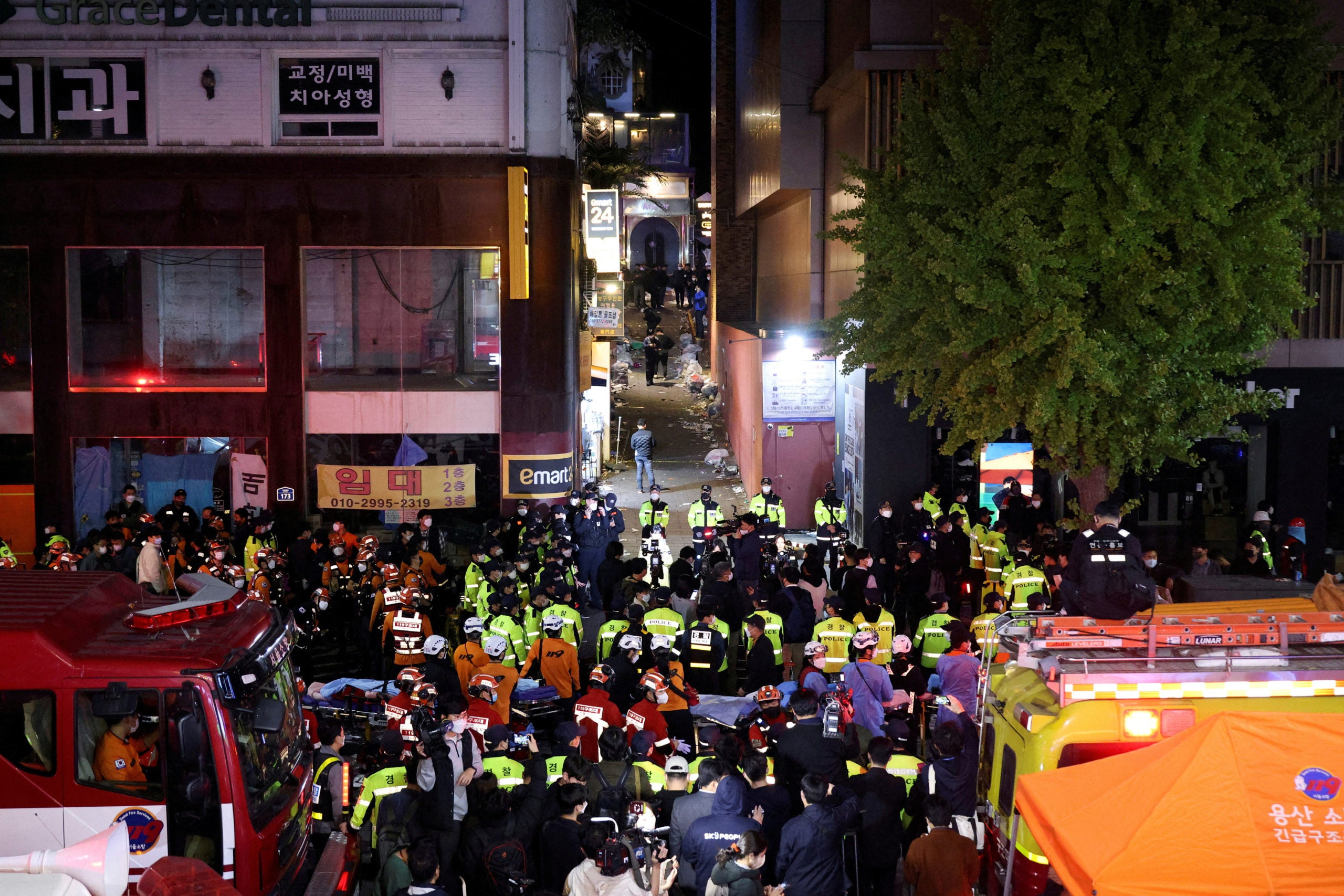 Rescue team and firefighters work at the scene where dozens of people were injured in a stampede during a Halloween festival in Seoul, South Korea, October 30, 2022. REUTERS/Kim Hong-ji

SEOUL — South Korea’s President Yoon Suk-yeol declared a period of national mourning on Sunday after a Halloween crush killed some 151 people in a packed nightlife area in Seoul.

Yoon expressed condolences to the victims, mostly teenagers and people in their 20s, and his wishes for a speedy recovery to the many injured.

“This is truly tragic,” he said in a statement. “A tragedy and disaster that should not have happened took place in the heart of Seoul last night.”

A huge crowd celebrating in the popular Itaewon district surged into an alley on Saturday night, emergency officials said, adding the death toll could rise.

Choi Sung-beom, head of the Yongsan Fire Station, said 151 deaths had been confirmed, including 19 foreigners. He told a briefing at the scene 82 people were injured, 19 of them seriously.

READ:  At least 149 killed in stampede at Halloween event in South Korea

It was the first Halloween event in Seoul in three years after the country lifted COVID-19 restrictions and social distancing. Many of the partygoers were wearing masks and Halloween costumes.

Early on Sunday costumes and personal belongings mingled with blood spots in the narrow street. Survivors huddled under emergency blankets amid throngs of emergency workers, police, and media.

Many of those killed were near a nightclub, Choi said. Many of the victims were women in their 20s, while the foreigners killed included people from China, Iran, Uzbekistan and Norway, he said.

Witnesses described the crowd becoming increasingly unruly and agitated as the evening deepened. Chaos erupted just before the 10:20 p.m. (1320 GMT) stampede, with police on hand for the event at times struggling to control the crowds, witnesses said.

Moon Ju-young, 21, said there were clear signs of trouble in the alley before the incident. He told Reuters it was more than 10 times as crowded as usual.

Social media footage showed hundreds of people packed in the narrow, sloped alley crushed and immobile as emergency officials and police tried to pull them free.

Choi, the Yongsan district fire chief, said all the deaths were likely from the crush in the alley.

Fire officials and witnesses said people continued to pour into the alley after it was already packed wall-to-wall, when those at the top of the slope fell, sending people below them toppling over others.

One woman said her daughter, pulled from the crush of people, survived after being trapped for more than an hour.

A makeshift morgue was set up in a building next to the scene. About four dozen bodies were wheeled out on wheeled stretchers and moved to a government facility to identify the victims, according to a Reuters witness.

The Itaewon district is popular with young South Koreans and expatriates alike, its dozens of bars and restaurants packed on Saturday for Halloween after businesses had suffered a sharp decline over three years of the pandemic.

“You would see big crowds at Christmas and fireworks … but this was several ten-folds bigger than any of that,” Park Jung-hoon, 21, told Reuters from the scene.

U.S. President Joe Biden and first lady Jill Biden sent their condolences, writing: “We grieve with the people of the Republic of Korea and send our best wishes for a quick recovery to all those who were injured.”

British Prime Minister Rishi Sunak tweeted: “All our thoughts are with those currently responding and all South Koreans at this very distressing time.”

With the easing of the COVID pandemic, curfews on bars and restaurants and a limit of 10 people for private gatherings were lifted in April. An outdoor mask mandate was dropped in May.

President Yoon held an emergency meeting with senior aides and ordered a task force be set up to secure resources to treat the injured and launch a thorough investigation into the cause of the disaster.

The disaster is among the country’s deadliest since a 2014 ferry sinking that killed 304 people, mainly high school students.

The sinking of the Sewol, and criticism of the official response, sent shockwaves across South Korea, prompting widespread soul-searching over safety measures in the country that are likely to be renewed in the wake of Saturday’s crush.