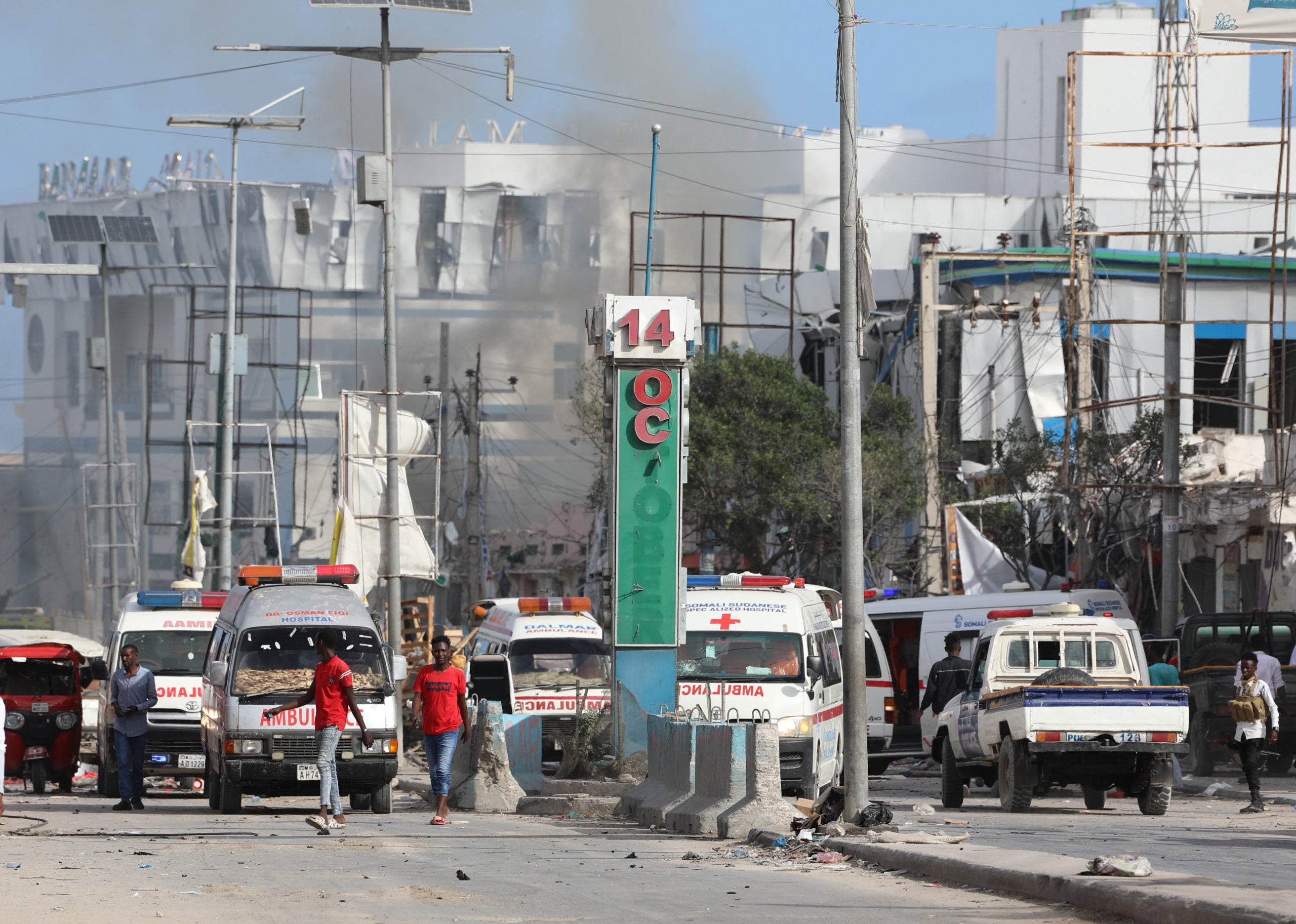 Security personnel and ambulances are stationed near destroyed and damaged buildings after an car bombing targeted the education ministry in Mogadishu on October 29, 2022. – Two huge car bombings rocked Somalia’s education ministry in the capital Mogadishu causing casualties and shattering windows of nearby buildings, police and witnesses said. The “simultaneous explosions occurred along the Zobe road and there are various casualties. We will provide details later,” Sadik Dudishe, Somali police spokesman said. (Photo by Hassan Ali ELMI / AFP)

MOGADISHU, Somalia — The number of people killed in an attack on Saturday at a busy intersection in the Somali capital Mogadishu has risen to 100, President Hassan Sheikh Mohamud said on Sunday.

“So far, people who died have reached 100 and 300 are wounded, and the number for both the death and wounded continues to increase,” he said after visiting the bombing location.

The afternoon explosions shattered windows of nearby buildings, sending shrapnel flying and plumes of smoke and dust into the air.

The attack took place at the same busy junction where a truck packed with explosives blew up on October 14, 2017, killing 512 people and injuring more than 290.

Mohamud described the incident as “history,” saying “it is the same place, and the same innocent people involved.”

“This is not right. God willing, they will not be having an ability to do another Zobe incident,” he said, referring to the Islamist group Al-Shabaab.

The jihadists have been seeking to overthrow the fragile foreign-backed government in Mogadishu for about 15 years.

Its fighters were driven out of the capital in 2011 by an African Union force but the group still controls swathes of countryside and continues to wage deadly strikes on civilian and military targets.

In August, the group launched a 30-hour gun and bomb attack on the popular Hayat hotel in Mogadishu, killing 21 people and wounding 117.

Mohamud, who was elected in May, vowed after the August siege to wage “all-out war” on the Islamists.

In September, he urged citizens to stay away from areas controlled by jihadists, saying the armed forces and tribal militia were ratcheting up offensives against them.

Al-Shabaab remains a potent force despite multinational efforts to degrade its leadership.

The group last week claimed responsibility for an attack on a hotel in the port city of Kismayo that killed nine people and wounded 47 others.

Somalia — like its neighbors in the Horn of Africa — is in the grip of the worst drought in more than 40 years. Four failed rainy seasons have wiped out livestock and crops.

The conflict-wracked nation is considered one of the most vulnerable to climate change but is particularly ill-equipped to cope with the crisis as it battles the deadly Islamist insurgency.