Rule of law in PH: Ranking inches up, but situation ‘gloomier’ | Inquirer News

Rule of law in PH: Ranking inches up, but situation ‘gloomier’ 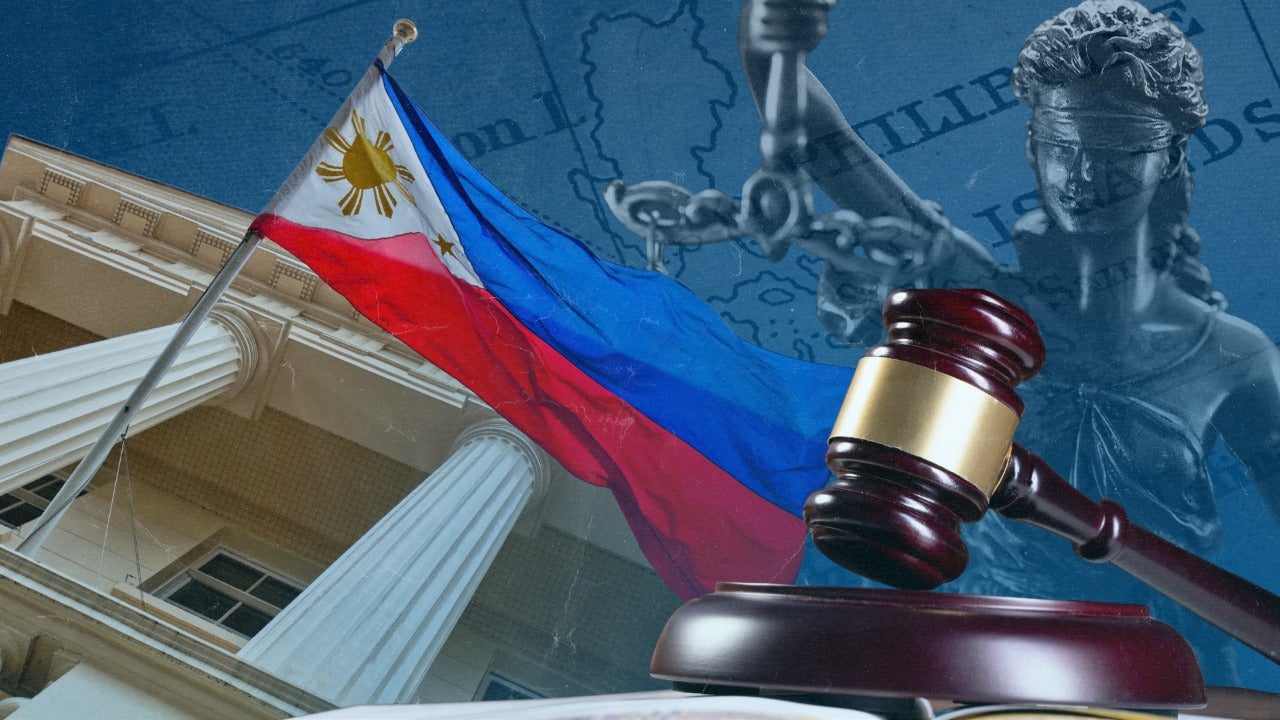 MANILA, Philippines—While the Philippines’ standing on the Rule of Law Index slightly improved this year, it still remains one of the weakest in the East Asia & Pacific region, the World Justice Project (WJP) revealed.

However, even if the Philippines is now 97th, it remains one of the weakest in the region—13 out of 15—and was only ahead of Myanmar and Cambodia, which received a rating of 0.36 and 0.31, respectively.

Based on the list, which measures countries’ adherence to the rule of law by considering eight main factors, the Philippines saw improvements in order and security (0.66 from 0.63), fundamental rights (0.40 from 0.39), and criminal justice (0.32 from 0.31).

“Order and security” measures how well a society ensures the security of persons and property, while “fundamental rights” looks at how a society recognizes that laws should respect human rights. “Criminal justice” evaluates a country’s criminal justice system.

With regard to the rest of the factors, the Philippines stayed stagnant—constraints on government powers (0.48), absence of corruption (0.44), open government (0.50), regulatory enforcement (0.48), and civil justice (0.45). 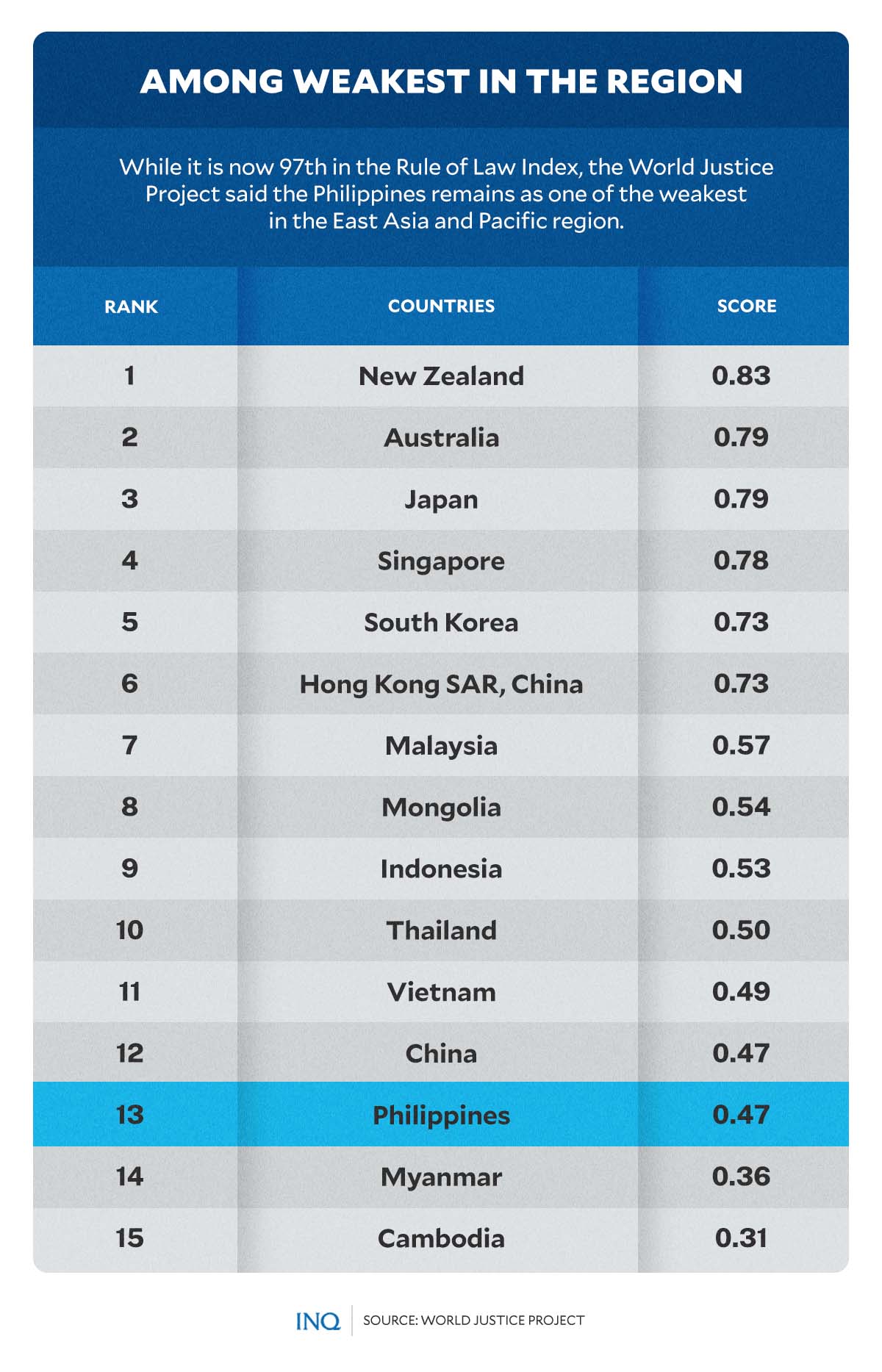 ‘Way down the ladder’

But while the Philippines’ standing slightly improved, lawyer Ephraim Cortez, president of the National Union of People’s Lawyers, told INQUIRER.net that “it is still way down the ladder.”

Cortez stressed that “these figures are much to be desired, as they reflect a gloomy situation of human rights, especially on the issue of rule of law.”

As stated by WJP, “the rule of law is a durable system of laws, institutions, norms, and community commitment that delivers accountability, just law, open government, and accessible and impartial justice.”

“These four universal principles constitute a working definition of the rule of law. They were developed in accordance with internationally accepted standards and norms, and were tested and refined in consultation with a wide variety of experts worldwide.” 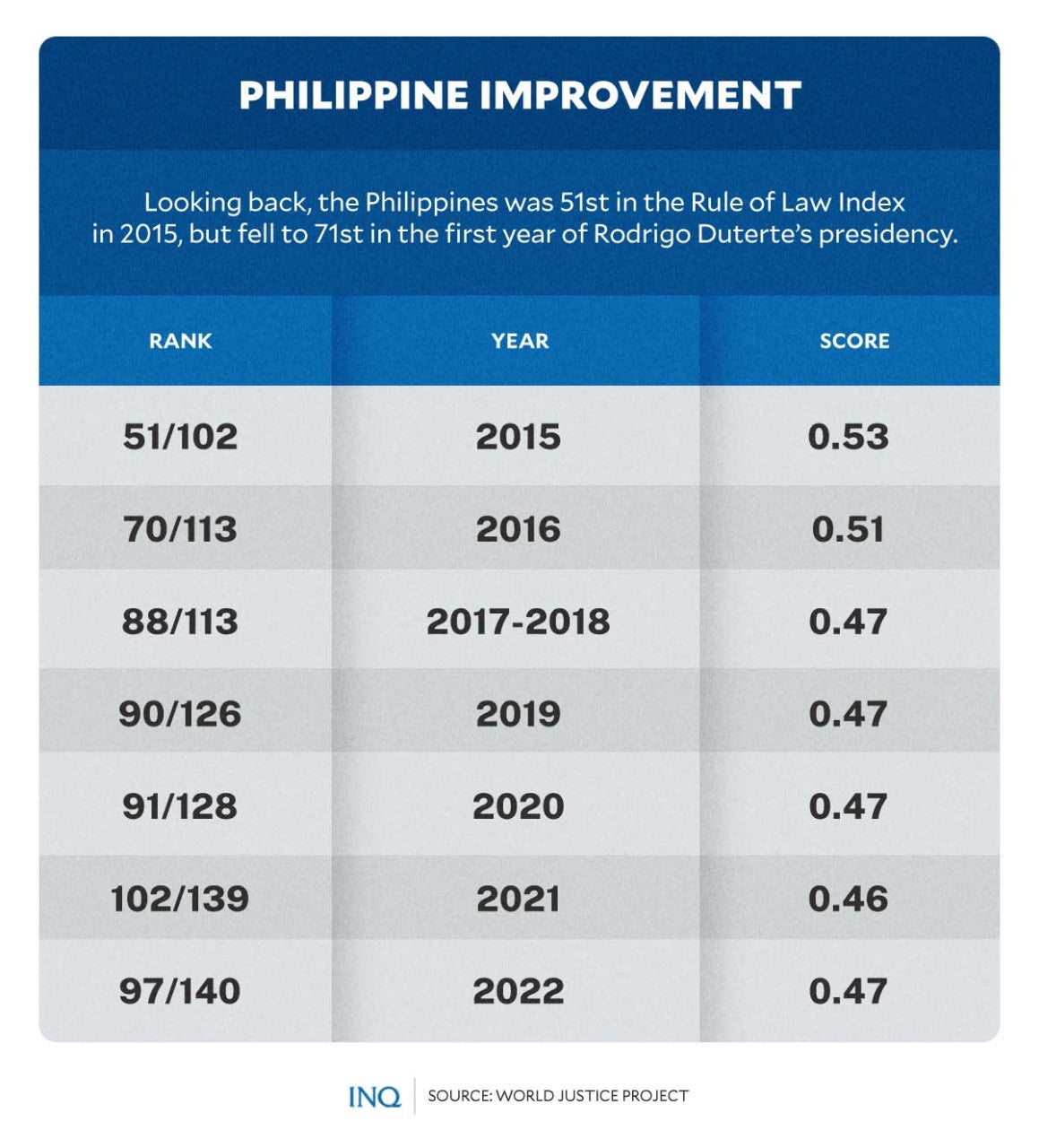 Since “the index only captures a part of the situation [of rule of law] in the Philippines,” Cortez stressed that “a look at what is happening on the ground will show a gloomier situation.”

“The harassment of activists and political dissenters are intensifying, the latest are the arrest of three labor leaders, red-tagging remains to be a daily staple,” he said on Thursday (Oct. 27). 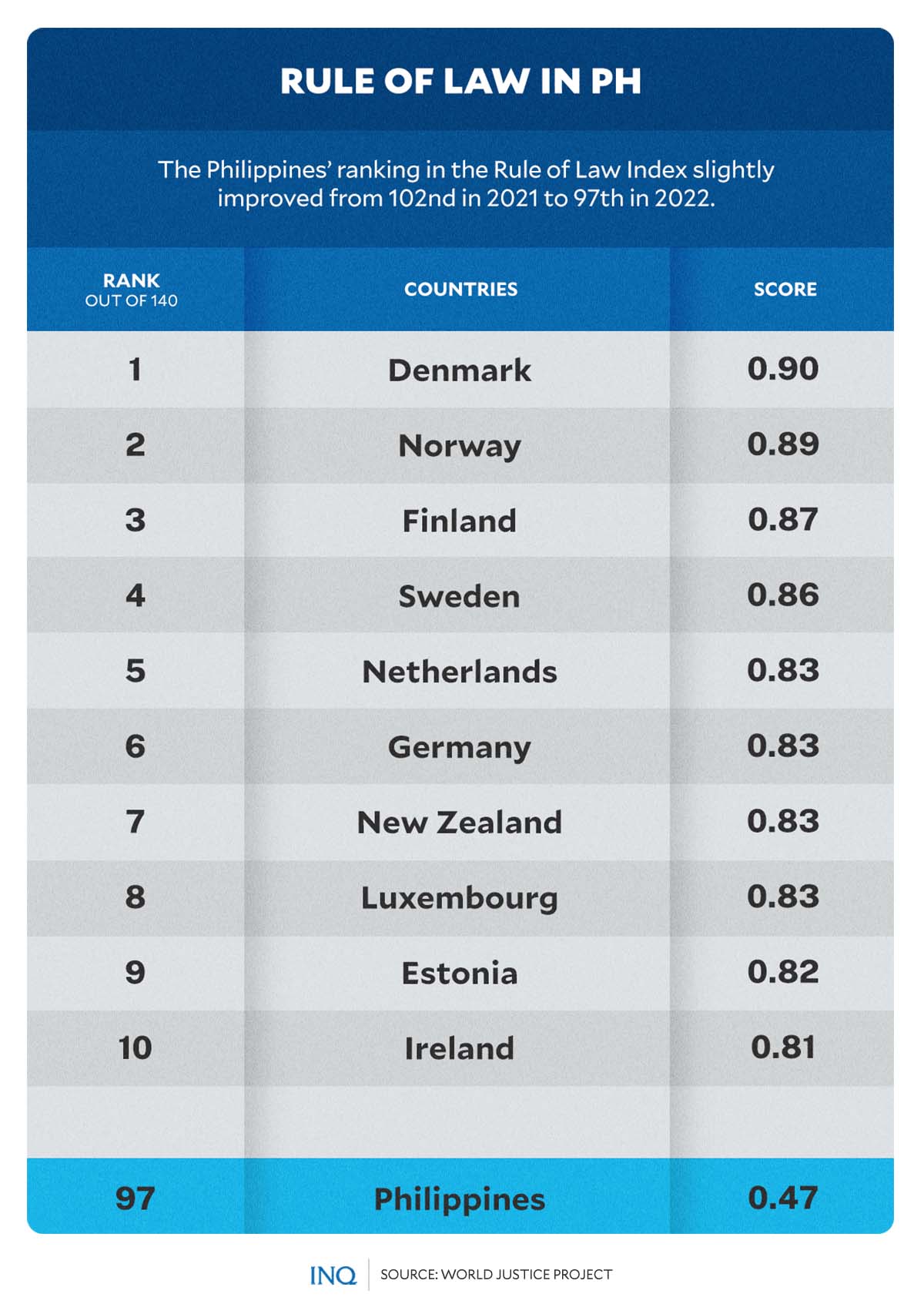 Based on data from rights group Karapatan, 442 activists were killed in Duterte’s six-year presidency—July 2016 to June 2022—while 1,341 were victims of illegal arrest and detention.

WJP said there are “alarming trends” in promoting fundamental rights of individuals all over the world after core freedoms fell from 2015 to 2021.

The “alarming trends” include the unfair treatment of political opposition and the media, who the WJP said have been at the receiving end of “unreasonable searches, detentions, or threats, and abusive treatments.”

“We also remember the attacks on journalists, especially the assasination of Percival Mabasa, or Percy Lapid,” Cortez said, referring to the killing of Mabasa, who was shot in Las Piñas City on Oct. 3.

“Authoritarian trends that predate the pandemic continue to erode the rule of law. Checks on executive power are weakening and respect for human rights is falling,” WJP Executive Director Elizabeth Andersen said. 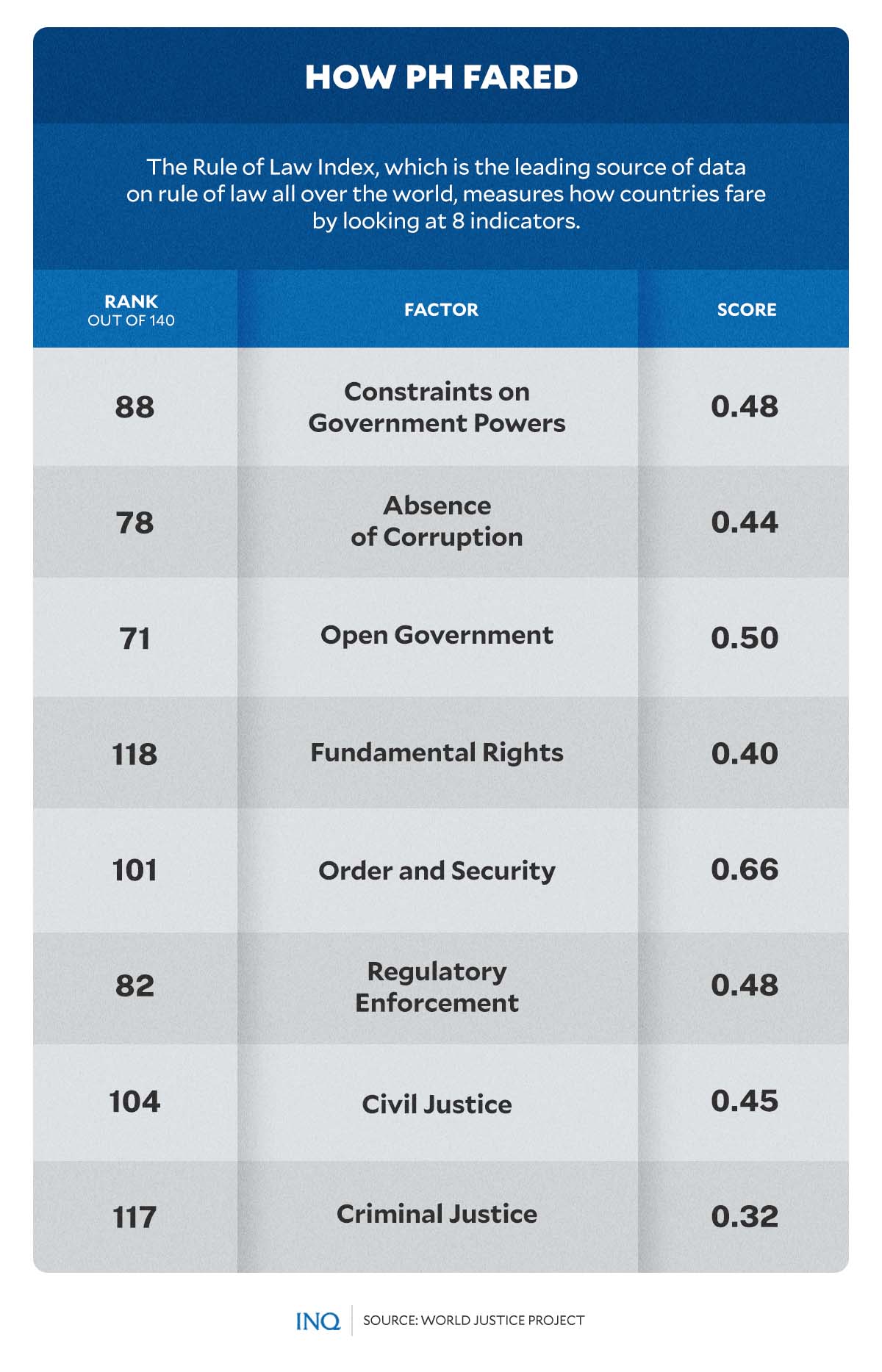 WJP stressed that “no matter who we are or where we live, the rule of law affects us all. It is the foundation for communities of justice, opportunity, and peace—underpinning development, accountable government, and respect for fundamental rights.”