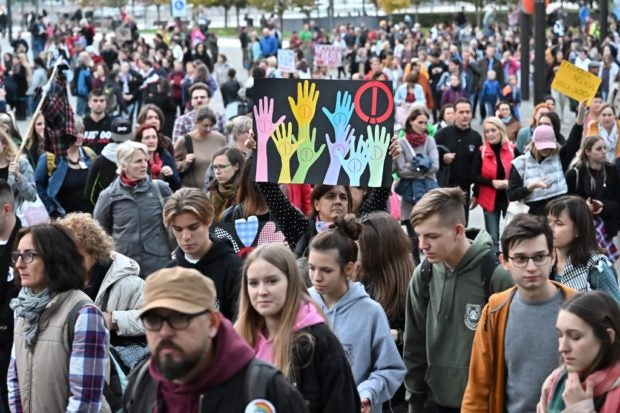 In this file photo taken on October 5, 2022 Thousands of teachers, students and parents march to the parliament building as Hungarian students block the traffic on Margit Bridge during their sympathizer demonstration with their teachers to protest against Orban’s government education policy and demand a better life, work and financial condition for their teachers in Budapest, the International Teachers’ Day. (Photo by Attila KISBENEDEK / AFP)

Budapest, Hungary — Hungary’s failing schools are becoming the focus of swelling protests, with pupils and parents backing teachers sacked for rebelling over “humiliating” low pay and years of government neglect.

With supermarket cashiers paid more than most teachers, thousands have joined the protests since the beginning of September, with human chains formed around schools across the country.

Last Friday students burned letters threatening teachers with dismissal near the Interior Ministry, which has been put in charge of education by nationalist premier Viktor Orban, who restricted the right to strike in February.

Another mass protest is planned for Sunday.

Budapest high school teacher Katalin Torley was sacked along with four of her colleagues last month for refusing to teach classes in protest at low pay and severe restrictions on the curriculum, which critics say is biased toward Orban’s conservative and nativist agenda.

Torley, who has taught French for 23 years, told AFP her sacking had been “very painful… Teaching is the most important activity of my life. I am very attached to the pupils.”

But after years of unsuccessful lobbying for better conditions, “we’ve had enough… Kicking us out is a message to the others not to dare do the same,” she said. 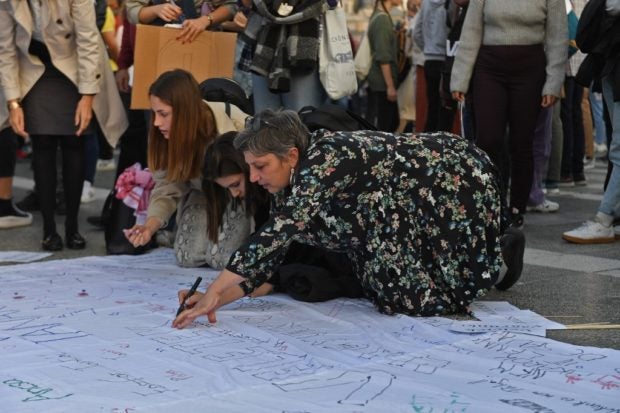 Katalin Torley, a fired teacher of Kolcsey Ferenc high school makes a banner which students during a demonstration where teachers, students and parents protest against the government’s education policy and for better life, work and financial conditions for teachers at Heroes Square, before marching to the Ministry of Interior in Budapest on October 14, 2022. (Photo by FERENC ISZA / AFP)

Hungarian teachers are the lowest paid of any EU member in the OECD at just 60 of other Hungarian university graduates, according to EU figures.

The government acknowledges that pay is too low. But it has tied a planned rise — to 80 percent of the average graduate salary by 2025 — to long-awaited EU funding held up over concerns over Hungary’s corruption and slipping democratic standards.

But Torley said a pay hike that barely matches inflation “will not be enough” to quell the protests, pointing to “serious structural problems” in education.

Hungary is already in the grip of a chronic teacher shortage, with few young people joining the profession and 40 percent of teachers aged over 50.

According to the EU, the centralized management of schools also leaves school directors with limited autonomy to improve teaching quality, further eroding morale.

As part of sweeping reforms since Orban returned to power in 2010, locally-run schools were nationalized with a central authority controlling textbooks that teachers must strictly follow.

Critics of the hardline anti-immigration Orban say the curriculum is riddled with ideological bias. 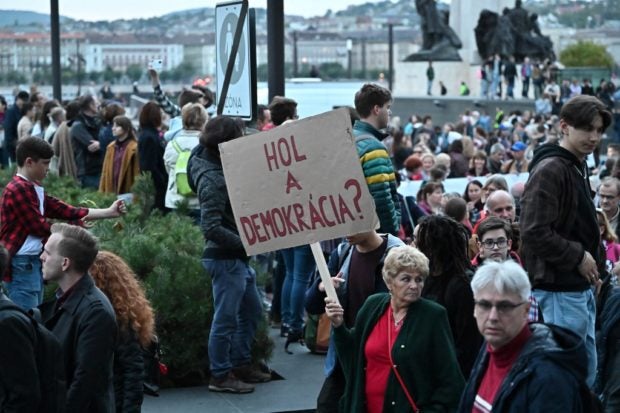 A teacher holds a placard which reads Where is the democracy?” as they march to the parliament building while Hungarian students block the traffic on Margit Bridge during their sympathizer demonstration with their teachers to protest against Orban’s government education policy in Budapest, on October 5, 2022, the International Teachers’ Day. (Photo by Attila KISBENEDEK / AFP)

‘System on its knees’

The lack of a separate education ministry is symbolic of the government’s “criminal neglect” of the sector, according to Szabolcs Kincse, of the PDSZ teachers union.

“The Hungarian education system is not falling apart, it is already on its knees,” Kincse told reporters Monday.

Underfunding over the last decade has meant that schools regularly have to ask parents for donations towards basic items like chalk and furniture, he said.

And in international comparisons, Hungarian students perform well below the EU average.

“I want my kids to get something out of the education system before it collapses altogether,” an IT worker and father-of-two Daniel Fogaras, 43, told AFP at the demonstration outside the Interior Ministry.

For Akos Bozai, a 17-year-old student, the protests “demonstrate our power to tell the teachers, ‘We are standing for you, your rights and a better educational system.'”

But he said success would only come “if teachers continue their civil disobedience and strikes.”