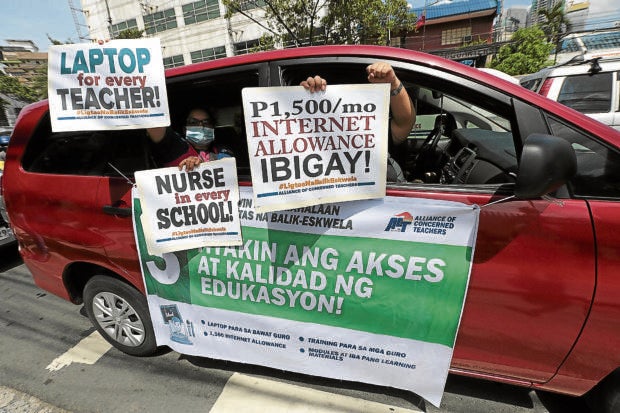 JUST DEMANDS Teachers hold a drive-by protest at the central office of the Department of Education in Pasig City. —FILE PHOTO

MANILA, Philippines — The largest organization of teachers in the country will push through with their protests on World Teachers’ Day on Tuesday until the Duterte administration acts on their demands.

In an online briefing on Saturday, the Alliance of Concerned Teachers (ACT) Philippines said their demands were salary upgrading; overtime compensation; laptop and monthly internet allowance for teachers, as well as gadgets and aid for students; P3,000 inflation adjustment for teachers; and P10,000 honorarium for teachers who will serve in the elections.

According to ACT, the online petition listing the five demands had already garnered 1,808 signatures on Saturday. Teachers are also set to go on mass leave on Tuesday using their unpaid service credits.

“We call on the [Department of Education (DepEd)] and the rest of the Duterte administration [to] spare us your empty messages of gratitude for teachers this World Teachers’ Day,” said Raymond Basilio, secretary-general of ACT.

He noted that, over the past five years, President Duterte has failed miserably in fulfilling his promises to the country’s almost 4 million teachers.

“This year, we urge you to simply listen and act on our just demands,” Basilio added.

Currently, base pay for public school teachers is at Salary Grade 11 or P23,877.

ACT demanded that the DepEd fulfill its promise to pay teachers 87 days of unpaid overtime work in the last school year as agreed upon.

It also called out the “failure” of the DepEd to give laptops to 1 million public school teachers as the agency implemented distance learning amid the pandemic.

They claimed that the DepEd was only able to distribute 68,500 laptops under the Bayanihan 2 law.

They were also pushing for Congress to pass into law the P3,000 monthly inflation adjustment allowance for government workers being proposed by Makabayan bloc lawmakers in the House of Representatives.