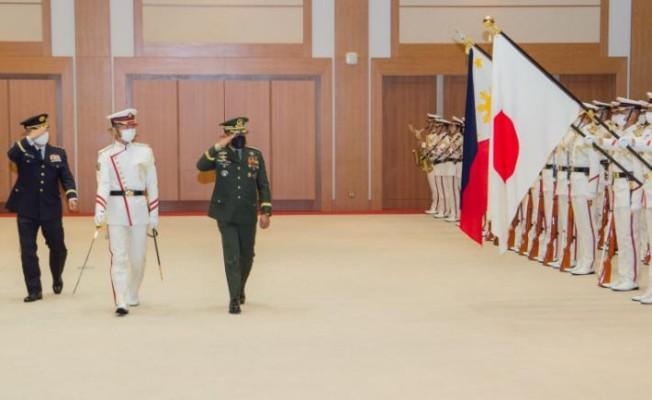 Japanese Ground Self-Defense Force chief of staff Gen. Yoshida Yoshihide and Philippine Army chief Lt. Gen. Romeo S. Brawner Jr., troop the line prior to the signing of the trilateral Terms of Reference with the Philippine Marine Corps and JGSDF in Tokyo, Japan on July 27, 2022. (Photo from the Philippine Army)

MANILA, Philippines — The Philippines will participate for the first time in a joint annual military exercise in Japan in December alongside the United States and other partners, according to a top military official, as Washington and its key allies seek to enhance combined defense posture amid regional tensions.

The Philippine Army will send observers for the upcoming Yama Sakura exercise, Army chief Lt. Gen. Romeo Brawner Jr. told the Inquirer on Wednesday. Japan has been joining Philippine-US military drills in the country as an observer while also conducting small-scale bilateral exercises on disaster response.

Yama Sakura is the largest command post exercise in Japan between the Japan Ground Self Defense Force (JGSDF) and US Army Pacific, which is designed to strengthen interoperability and boost alliances. Details of the drills have yet to be announced.

“We were invited by Japan and US,” Brawner said, as he also confirmed plans to join future exercises of Orient Shield, the largest field training exercise of Japan and US armies, also in Japan.

“Overall, this will enhance our trilateral relations with the US and Japan. On the tactical side, we will observe how both US Army and the JGSDF operate in a joint, combined, and multi-domain warfare. This will allow us to adjust our doctrines, tactics, techniques, and procedures as necessary in order for us to operate on a global scale,” he said.

The Philippine and Japanese armies have seen increased high-level engagements this year, with Brawner meeting top officials from JGSDF at least thrice in recent months. In July, the Army and Philippine Marine Corps signed a terms of reference with JGSDF that would set the policy for future engagements.

The expansion from bilateral to multilateral exercises among US allies is expected to become a trend amid tensions in the region, to deter what Washington described as “irresponsible behaviors” of actors like China and North Korea against their neighbors.

“Japan is eager to maintain peace and stability and it considers it desirable for the international community to prevent wars,” he said at a US Army-hosted forum last week.