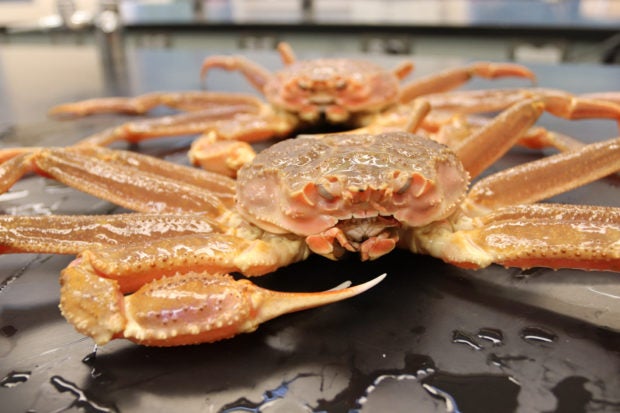 This undated handout photo courtesy of NOAA Fisheries shows a mature male snow crab on the deck of a survey vessel in Alaska.  AFP

WASHINGTON — Climate change is a prime suspect in a mass die-off of Alaska’s snow crabs, experts say, after the state took the unprecedented step of canceling their harvest this season to save the species.

According to an annual survey of the Bering Sea floor carried out by the National Oceanic and Atmospheric Administration, estimates for the crustaceans’ total numbers fell to about 1.9 billion in 2022, down from 11.7 billion in 2018, or a reduction of about 84 percent.

For the first time ever, the Alaska Department of Fish and Game announced the Bering Sea snow crab season will remain closed for 2022-23, saying in a statement efforts must turn to “conservation and rebuilding given the condition of the stock.”

The species is also found in the more northward Chukchi and Beaufort Seas, but they do not grow to fishable sizes there.

Erin Fedewa, a marine biologist with the Alaska Fisheries Science Center, told AFP the shocking numbers seen today were the result of heatwaves in 2018 and 2019.

The “cold water habitat that they need was virtually absent, which suggests that temperature is really the key culprit in this population decline,” she said.

Historically an abundant resource in the Bering Sea, their loss is considered a bellwether of ecological disruption.

There are thought to be several ways that warmer temperatures have depleted the species.

Studies have pointed toward a higher prevalence of Bitter Crab Disease as the temperature heats up.

The crustaceans, named for their love of cold water, are also under greater metabolic stress in warmer waters, meaning they need more energy to stay alive.

“A working hypothesis right now is that the crabs starved, they couldn’t keep up with metabolic demands,” said Fedewa.

More research is underway and findings should be published soon, but in the meantime, “everything really points to climate change,” Fedewa said.

“These are truly unprecedented and troubling times for Alaska’s iconic crab fisheries and for the hard-working fishermen and communities that depend on them,” Jamie Goen, executive director of Alaska Bering Sea Crabbers said in a statement, lamenting that second and third generation crab-fishing families “will go out of business.”

The industry was also hit by the cancellation of Bristol Bay red king crab fishing for the second year in a row.

Fedewa also noted that overfishing isn’t a big factor in the population collapse of snow crabs.

Fishing removes only large adult males, she said, “and we’ve seen these declines across all sizes of snow crab, which really suggest some bottom-up environmental driver is at play.”

In some good news, this year’s survey saw significant increases in the immature crabs compared to last year — but it will take four or five years before the males among them grow to fishable size.

Following the heatwave years, temperatures have returned to normal, and “the hope is that leaving crabs untouched will allow them to reproduce, there’ll be no mortalities, and we can just let the stock try to recover,” said Fedewa.

A hope that is pinned on no further heatwaves.