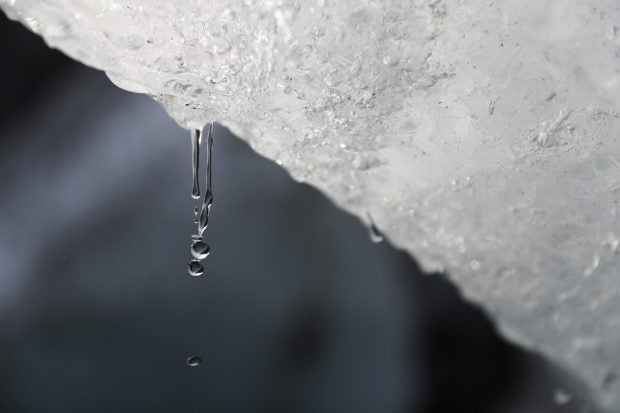 Water drops are seen dripping from the Wolverine Glacier in the Kenai Mountains on September 06, 2019 near Primrose, Alaska. AFP FILE PHOTO

LOS AGELES — Extreme weather in Alaska that has brought record high temperatures and torrential downpours has left authorities in the far northern US state warning of “Icemageddon”.

Huge sheets of ice are blocking roads and choking traffic in Fairbanks, Alaska’s second largest city, reported the state’s transportation department, which has coined the neologism — a play on “Armageddon” — to describe the chilly impasse.

Scientists say the unchecked burning of fossil fuels and other human activity is changing the climate, making it more unpredictable and prone to wild swings.

Rick Thoman, a weather specialist at the University of Alaska, Fairbanks, called the conditions of the past few days “very unusual”.

Hours after thermometers on Kodiak Island in the south reached 19.4 degrees Celsius (67 Fahrenheit) — the warmest December temperature ever recorded in Alaska — the interior of the state saw 25 millimeters (an inch) of rain fall in just a few hours, a downpour unseen in decades.

Then when temperatures plummeted again, it all froze.

The rainstorm was caused by the same weather system that brought the soaring temperatures, transporting warm, moist air from Hawaii to the frigid far north.

“This kind of thing — record high moisture content, record warm air — is exactly what we expect, of course, in our warming climate.

Unsettled weather was continuing to play havoc with flights in an out of Sea-Tac International Airport in Seattle, with hundreds of flights canceled or delayed this week.

In California, snow and persistent rain also continue to cause problems, with localized flooding forcing evacuations in areas around Los Angeles.

In the north of the state, the tourist magnet of Lake Tahoe — where forest fires a few months ago caused residents to flee — has been buried in heavy snow, leaving some people cut off.

More than five meters of snow have now fallen on parts of the Sierra Nevada mountain range this month, an all-time record, according to the Central Sierra Nevada Snow Laboratory at University of California at Berkeley.