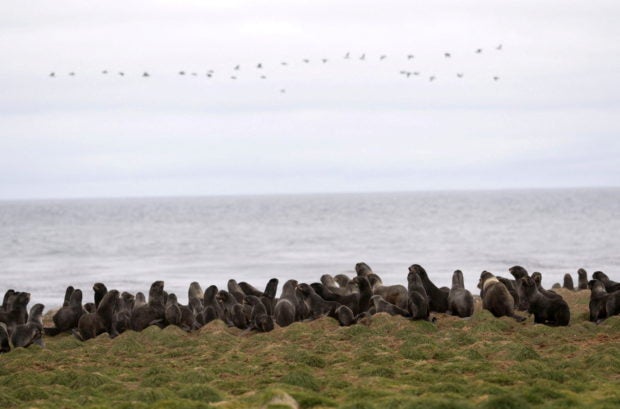 ANCHORAGE, Alaska — An unusual winter warm spell in Alaska has brought daytime temperatures soaring past 60 degrees Fahrenheit (15.5°C) and torrents of rain at a time of year normally associated with bitter cold and fluffy snow.

At the island community of Kodiak, the air temperature at a tidal gauge hit 67 F (19.4°C) degrees on Sunday, the highest December reading ever recorded in Alaska, said scientist Rick Thoman of the Alaska Center for Climate Assessment and Policy.

He called it “absurd.”

The new benchmark high came amid a spate of balmy December extremes, Thoman said, including 65 degrees at the Kodiak airport, a record 62 degrees at the Alaska Peninsula community of Cold Bay and at least eight December days of temperatures above 50 at the Aleutian town of Unalaska, including a 56-degree reading that was Alaska’s warmest Christmas Day on record.

The most serious immediate implication for humans is likely from the massive amounts of precipitation dumped on interior Alaska, where the Fairbanks area was hit by its fiercest mid-winter storm since 1937, Thoman said.

Normally, December is a dry month in interior Alaska because the usually frigid air cannot hold much moisture. Whatever moisture does flow in tends to be “the more fluffy powder because the air is nice and cold,” said Thoman, who lives in Fairbanks.

Not so over the past few days.

So much snow fell that on Sunday it caved in the roof of the sole grocery store in Delta Junction, a town 95 miles (153 km)southeast of Fairbanks.

Possibly worse, the heavy snows were followed by torrents of rain that coated communities in the region with ice, triggering widespread power outages and prompting closures of major roads and offices, as well as a nickname: Icemageddon.

The Alaska Department of Transportation and Public Facilities warned that roads will remain treacherous for a long time because of the cement-like ice coating that has formed on them.

“Ice is extremely difficult to remove once it has binded to the road surface. Even though air temps were warm during #icemageddon2021, roads were at sub-zero temps, which caused ice to bind to the surface,” the department said on Twitter.

The blasts of warm and wet mid-winter weather have become more frequent in Alaska over the past two decades than in years prior, a sign of climate change, Thoman said. “This is exactly what we expect in a warming world,” he said.

The story is similar elsewhere in the far north, where winter rains have proved treacherous to people and to grazing animals, like caribou and musk oxen, that struggle when ice on the ground covers food sources. Such hardships are expected to intensify.

A study published last month in the journal Nature Communications projected an Arctic climate with more winter rain than snow starting around 2060 or 2070.

Alaska will still have its winter cold – Fairbanks temperatures were forecast to plunge below minus 20 degrees Fahrenheit (-29 C) this weekend – but warm, soggy episodes are expected to be more numerous in the future, Thoman said.

“A warming, moistening world has put our thumbs on the scale to make this more likely,” he added.