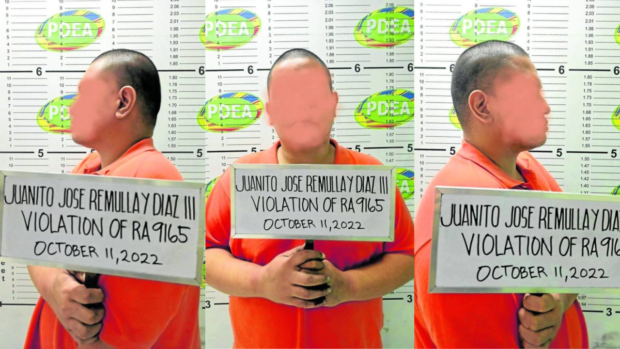 A NAME WITHOUT A FACE | The Philippine Drug Enforcement Agency (PDEA) on Friday released these mugshots of drug suspect Juanito Jose Diaz Remulla III, the 38-year-old son of Justice Secretary Jesus Crispin “Boying” Remulla. The photos handed to the media had the younger Remulla’s face covered for his privacy — a practice not always applied to other arrested crime suspects.

MANILA, Philippines The mothers and wives of victims of extrajudicial killings (EJK) in the government’s drug war are indignant over what they called “special treatment” of arrested drug suspect Juanito Jose Remulla III, son of Justice Secretary Jesus Crispin Remulla, after the Philippine Drug Enforcement Agency (PDEA) ruled out a drug test for him.

PDEA spokesperson Derrick Carreon earlier said the younger Remulla had refused to undergo drug testing “on the advice of his counsel.”

On Monday, the women decried the “double standard” between their loved ones and Remulla’s son, despite the secretary’s promise that he would not intervene in the case.

Marilyn Marimban, who lost her live-in partner, Jessie Cule, during the Aug. 21, 2016, drug raid in Barangay Payatas, Quezon City, that killed five men, said Remulla’s arrest was one of the reasons why the Philippines “has become the laughingstock not only of the world but also of the International Criminal Court (ICC),” which is currently investigating allegations of crimes against humanity in the conduct of former President Rodrigo Duterte’s drug war.

Cule and two other men, Marcelo “Nonoy” Daa Jr. and Rhaffy Gabo, were murdered in the “execution-style” killings.

She and the widows of Daa and Gabo were among the first to challenge the police’s narrative of “nanlaban” (meaning they tried to fight the police during an arrest or attempted to flee after being arrested) before the courts and became the first survivors to secure a protection order from the Court of Appeals on Feb. 10.

Remulla was arrested last week for ordering almost a kilogram of kush, or high-grade marijuana, estimated to be around P1.25 million. He is facing nonbailable charges of violation of Section 11 of Republic Act No. 9165 (possession) and Section 4 of the same law (importation).

However, he refused to undergo a drug test on the advice of his lawyer, according to the PDEA. A positive drug test would have added a criminal charge against him: violation of Section 15 of RA 9165 (use of dangerous drugs).

Infuriated by this double standard, Marimban said the government should, at the very least, reveal Remulla’s face to the public “so we see what kind of person they truly are… They pretend not to side with them but they give special treatment… where is our justice?”

Remulla’s face had been covered in mug shots handed to the media. The PDEA said this was done to protect his privacy. His face, however, has since been revealed in photos published in newspapers and online news sites, and social media.

Nanette Castillo, whose 17-year-old son Aldrin was killed by unidentified gunmen, slammed the older Remulla for wanting “a path of redemption” for his son while also publicly depriving EJK victims of the same.

“You refuse to let the ICC investigate the country so I could have at least some semblance of justice for my son, but you want redemption for yours? So shameless,” Castillo said.

Remulla had said that drug users were “so pernicious that they are like cockroaches… [you] have to put an end to the way they malinger.”

Castillo has become one of the most prominent faces of mothers seeking justice for victims of the drug war, becoming an accidental human rights defender in her crusade.

Drug-related killings also occur under the administration of President Marcos, according to Dahas, a program of the University of the Philippines’ Third World Studies Center. It said police and media reports showed more drug-related killings—in which the victim had alleged links to the illicit drug trade — in July, the first month of the Marcos presidency, than in June, the last month of the Duterte administration.

Altogether, 72 drug-related killings were recorded in July and August this year, Dahas said.