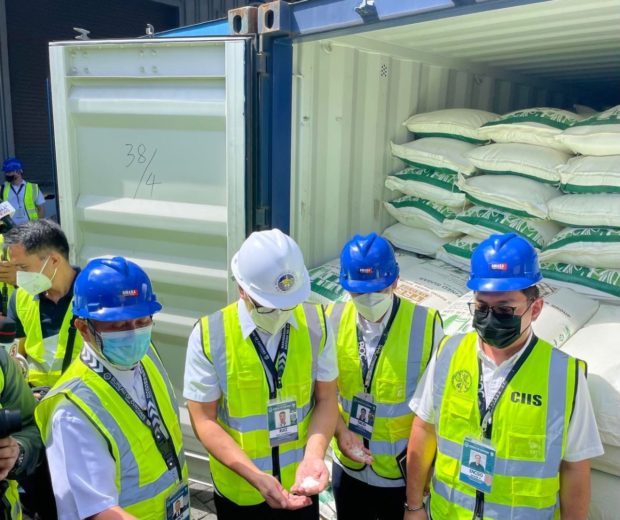 MANILA, Philippines — Authorities seized at least P228 million worth of imported refined cane sugar after arriving in the country without the required import clearances from the Sugar Regulatory Administration (SRA), the Bureau of Customs (BOC) said.

In a statement on Monday from BOC, Customs Intelligence and Investigation Service (CIIS) Director and Intelligence Group officer-in-charge Jeoffrey Tacio said the agency had already received intelligence reports about the shipment that allegedly contained “misdeclared and underdeclared items.”

After receiving this information, BOC issued an Alert Order last October 4. CIIS – Manila International Container Port (CIIS-MICP) chief Alvin Enciso then said that there was an attempt by the consignee, or the receiver of the shipment, to change its name last October 10, after the issuance of an alert order.

“There were already initial information about the shipment’s status. What’s good is all of us here acted expeditiously upon receiving this information from high authorities,” Tacio said.

The sugar landed in Manila on September 24 from Thailand. It lacked the appropriate SRA paperwork, forcing the BOC to issue two Warrants of Seizure and Detention (WSD) for not having the clearance for the release of imported sugar from SRA and for violating Sections 117 and 1113 of Republic Act No. 10863 or the Customs Modernization and Tariff Act (CMTA).

BOC Commissioner Yogi Filemon Ruiz inspected the 76 containers containing the sugar. According to the Customs chief, he is proud of what the team has achieved, as the offices did not allow the names of the consignees to be changed.

“There is a lot of hocus pocus that these smugglers try to get away with their crimes. We aren’t just here looking for every hoarder and smuggler. We’re here to stop any action that would jeopardize our market prices, the local production, and the impact of these on our workers and consumers,” he said.

“I’m proud of what our team has done in this case. They didn’t let this attempt to change consignees go through and were fast on their feet in making sure we stop another shipment from entering our local markets,” he added.

The BOC had stopped several sugar shipments from entering the country over speculations of smuggling. Last August, it was reported that a cargo vessel carrying at least 7,000 metric tons of sugar was stopped at the Subic Bay Freeport for using recycled importation permits.

At least six Customs officials were relieved while a probe into the incident was underway.

Last September, BOC seized P1.8 billion worth of imported goods and sugar in Batangas — including 181,299 sacks of pure refined sugar from Thailand.

BOC’s operations came after President Ferdinand Marcos Jr. himself called on the bureau to get to the bottom of alleged sugar smuggling and hoarding in the country, as Malacañang said hoarders are setting up an ‘artificial shortage’ in the country.

Eventually, Marcos allowed sugar importation, but only for 150,000 metric tons — with the provision that half of the supply would go to industrial users while the other half would be intended for the market or consumers.

Panels in both the House of Representatives and the Senate have launched an investigation into the issue, with the Senate minority bloc saying that former executive secretary Vic Rodriguez — who gave SRA the order to draft a sugar importation order — cannot be blameless. With reports from Joshua Go, INQUIRER.net trainee