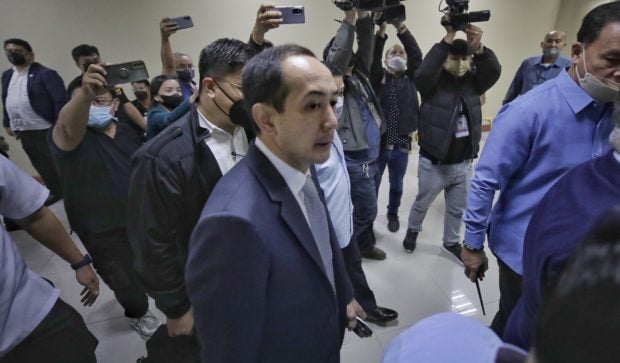 ES RODRIGUEZ FACES BLUE RIBBON HEARING: Shortly after members of the Blue Ribbon Committee voted to subpoena him, Executive Secretary Victor Rodriguez appears before the panel Tuesday, September 6, 2022 to clarify what transpired before the controversial issuance of the Sugar Order No. 4 (SO4). (Senate PRIB Photos)

The minority bloc, composed of Senators Risa Hontiveros and Aquilino “Koko” Pimentel III, released a separate report on their investigation of the importation mess.

The following are their findings, including the alleged shortcoming of Rodriguez:

“He [Rodriguez] is the primary person to protect the principal, protect the president,” Hontiveros said in a press conference at the Senate, referring to President Ferdinand Marcos Jr. who concurrently serves as agriculture chief.

(He has shortcomings because he did not fully inform the president at a timely manner about the progress of the process that led to Sugar Order No. 4.)

Pimentel, for his part, pointed out that it is “unfair” to pour the blame on the four DA and SRA officials.

“Yun lang po ang aming (That is our) main message pagdating sa (when it comes to) accountability: Unfair to make the four personalities scapegoats, fall guys, or patsies,” the minority leader said in the same press conference.

The minority bloc issued their report on the sugar importation fiasco as they disagreed with the submitted report of the Senate Blue Ribbon Committee which investigated the matter.

“We believe the committee report fell short of making sense of this fiasco,” Hontiveros stressed.

The said panel, chaired by Senator Francis Tolentino, recommended the filing of administrative and criminal charges against the four DA and SRA officials.

The deliberations on the sugar importation mess stemmed from the publication of SO No. 4, which authorized the importation of 300,000 metric tons of sugar, on the SRA website.

Malacañang then disowned the order, saying that Marcos rejected the proposed importation.

INQUIRER.net has contacted Rodriguez, but he has yet to respond as of posting time.