At least 40 killed, one still missing in Turkey mine blast | Inquirer News

At least 40 killed, one still missing in Turkey mine blast 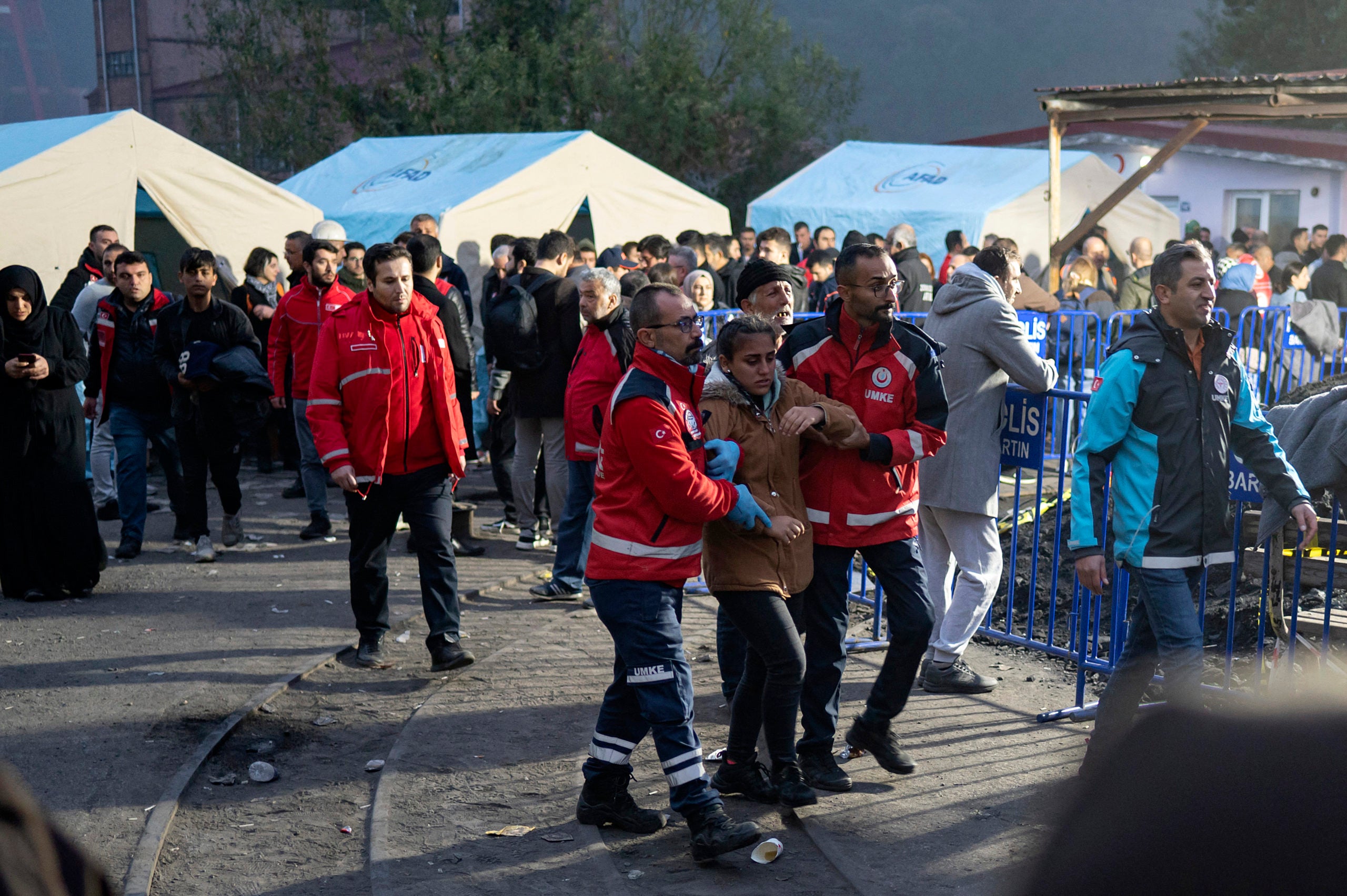 A woman is escorted outside a coal mine after an explosion in Amasra, in Bartin Province, Turkey, on October 15, 2022. – Rescuers desperately searched for signs of life on October 15, 2022 after a methane blast at a coal mine in northern Turkey killed at least 28 people and trapped dozens of others hundreds of metres underground. (Photo by Yasin AKGUL / AFP)

AMASRA, Turkey — Rescuers on Saturday searched for the last miner missing at a coal mine in northern Turkey, where a methane blast the previous day killed at least 40 people in one of the country’s worst industrial accidents in years.

The blast ripped through the mine near the small coal mining town of Amasra on Turkey’s Black Sea coast shortly before sunset on Friday.

“We are approaching the end of the rescue operation,” a tearful Energy Minister Fatih Donmez said at the scene on Saturday.

“The search continues for the sole person whose fate is unknown,” he said, adding that the fire that had broken out in the tunnels following the blast was now mostly under control.

Updating the death toll, Interior Minister Suleyman Soylu said: “We have counted 40 dead in total. 58 miners were able to be rescued, either by themselves or thanks to rescuers.”

He said 28 people had been injured as a result of the blast.

Soylu had said earlier some 110 people had been underground at the time of the explosion.

Television images late on Friday showed anxious crowds — some with tears in their eyes — congregating around a damaged white building near the entrance to the pit in search of news of their friends and loved ones.

Turkish President Recep Tayyip Erdogan, who was due to fly to the scene of the accident on Saturday, vowed on Twitter that the incident will be thoroughly investigated.

Most initial information about those trapped inside was coming from workers who had managed to climb out relatively unharmed.

But Amasra mayor Recai Cakir said many of those who survived had suffered “serious injuries”.

Turkey’s Maden Is mining workers’ union attributed the blast to a build-up of methane gas.

But other officials said it was premature to draw definitive conclusions over the cause of the accident.

Rescuers sent in reinforcements from surrounding villages to help in the search and rescue.

Television footage showed paramedics giving oxygen to the miners who had climbed out, then rushing them to the nearest hospitals.

The local governor said a team of more than 70 rescuers had managed to reach a point in the pit some 250 meters below.

Turkey’s AFAD disaster management service said the initial spark that caused the blast appeared to have come from a malfunctioning transformer.

It later withdrew that report and said methane gas had ignited for “unknown reasons”.

The local public prosecutor’s office said it was treating the incident as an accident and launching a formal investigation.

Turkey suffered its deadliest coal mining disaster in 2014 when 301 workers died in a blast in the western town of Soma.