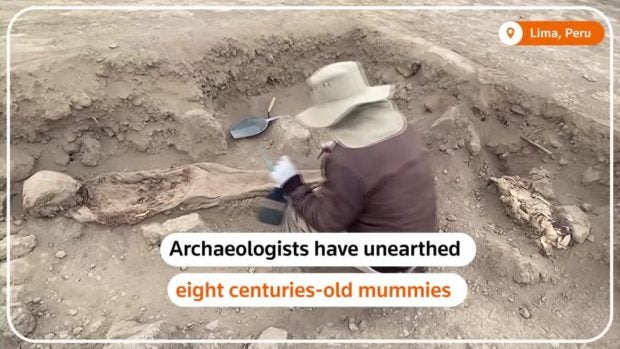 LIMA — Archaeologists in Peru have unearthed eight centuries-old mummies at a site in the country’s capital, an important find that experts say could point a colonial-era cemetery.

Archaeologists on Tuesday were hard at work in Lima’s Park of Legends on the coast of central Peru, carefully cleaning the ancient preserved corpses found under the site, including the remains of children.

Park official Lucenida Carrion said the latest find follows an earlier discovery of three mummies, one of which was holding a wooden cross, in early August.

“This finding backs our hypothesis that this could be cemetery from the colonial period, at the time of conversion to Christianity or Catholicism,” she said.

The mummies were found in unusual positions and with a mix of textiles that pointed to the influence of Spanish colonials, added field manager Manuel Moron.

Spain’s bloody conquest of Peru’s Inca empire began in 1532 and lasted four decades. Government officials said the site had been occupied by the Lima and Ychsma people before the Incas.

Other monuments discovered at the same site date back some 2,000 years.