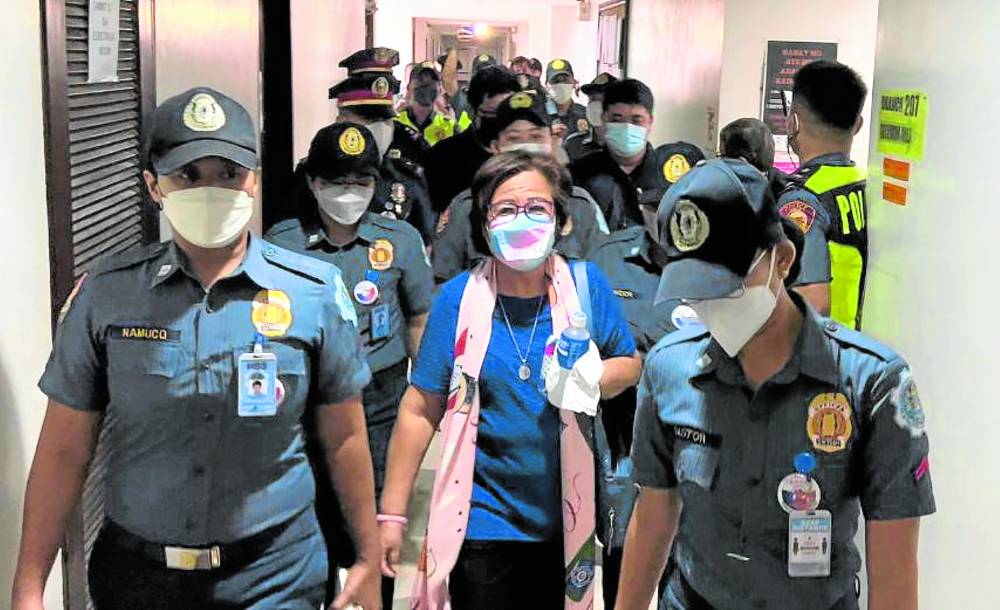 MANILA, Philippines — Minority senators have filed a resolution asking the Philippine National Police (PNP) to ensure the safety of former senator Leila de Lima after she was taken hostage inside the PNP’s Custodial Center last Sunday.

The resolution from Senators Koko Pimentel and Risa Hontiveros requires the PNP to inform the Senate about actions taken to secure De Lima — who was held at knifepoint by a fellow inmate who was trying to escape the detention facility inside Camp Crame in Quezon City.

“While investigations are ongoing at the PNP Custodial Center, the safety and security of a former member of the chamber have now become a primordial concern to the Senate of the Philippines,” the lawmakers said.

“Resolved as it is hereby resolved, urging the leadership of the [PNP] to undertake any and all necessary measures to guarantee the safety and security of former senator Leila de Lima, and henceforth keep the Senate duly informed on security actions taken on her behalf,” they added.

The minority senators also questioned how a security breach happened inside the custodial center and how hostage-taker Feliciano Sulayao Jr. could enter De Lima’s room.

“It is crucially important to understand how and why such a security breach happened and how Sulayao managed to have access to the quarters of former senator De Lima in light of emerging questions raised on the background and identities of the hostage takers,” they noted.

De Lima, detained at the facility over drug-related cases, was taken hostage by Sulayao last Sunday morning. The PNP said Sulayao and his two companions were trying to escape the facility. Police said Sulayao’s companions stabbed a police officer before they were neutralized.

De Lima is still confined at the PNP General Hospital after complaining of chest pains after the hostage-taking. However, the PNP said she is generally unharmed following the incident.

Previously, Senator Jinggoy Estrada also filed a resolution calling on the appropriate Senate panels to investigate the security protocols inside the PNP Custodial Center after the incident.

In a resolution filed on Wednesday, Estrada said that while the quick actions of the police officers who rescued De Lima are commendable, the incident is a poor reflection of the PNP’s capacity to secure the country.