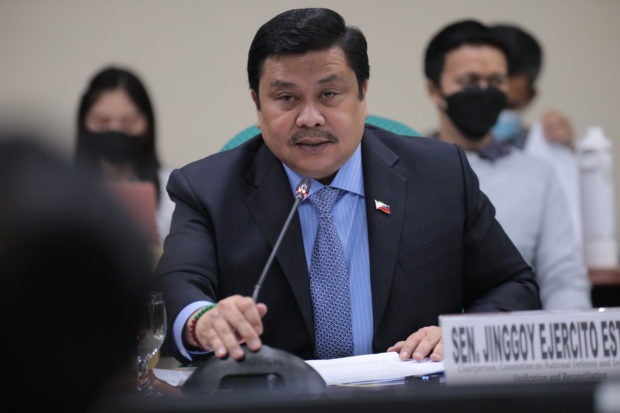 In a resolution filed on Wednesday, Estrada said that while the quick actions of the police officers who rescued de Lima are commendable, the incident is a poor reflection of the PNP’s capacity to secure the country.

De Lima was taken hostage by fellow inmate Feliciano Sulayao Jr., after his two companions, who were similarly trying to escape, were neutralized by police officers. Sulayao was eventually killed too, but the incident raised questions about the safety of police officers and inmates.

De Lima is currently inside the PNP General Hospital, complaining of chest pains after Sulayao pressed the knife against her chest. However, she was generally unharmed after the incident.

But aside from the hostage-taking issue and the inmates’ attempt to escape, Estrada also wants an investigation on the complaints raised by Sulayao when he took de Lima hostage, as the hostage-taker claimed that they were being fed pork meals.

Sulayao, a Muslim, is not allowed to eat pork products.

(We have several issues with our treatment here, including being fed meals containing pork. )

“The police organization should inspire confidence through the institutionalization of strict security protocols in PNP detention facilities, adequate training and capacity-building of its officers and personnel, and humane treatment of persons under police custody, being respectful of their religious beliefs and cultural practices,” he added.

It was in the PNP Custodial Center that Estrada spent time while being held for his alleged involvement in the pork barrel scam. In 2017, nevertheless, he was able to post bond and leave the facility.

On Wednesday, Interior Secretary Benjamin Abalos Jr. said that the cells used by Estrada and fellow Senator Ramon Revilla Jr. could be offered to de Lima so that she would not be traumatized by the incident.

Currently, the cells used by Estrada and Revilla when they were detained, are utilized as quarters for the Special Action Force.