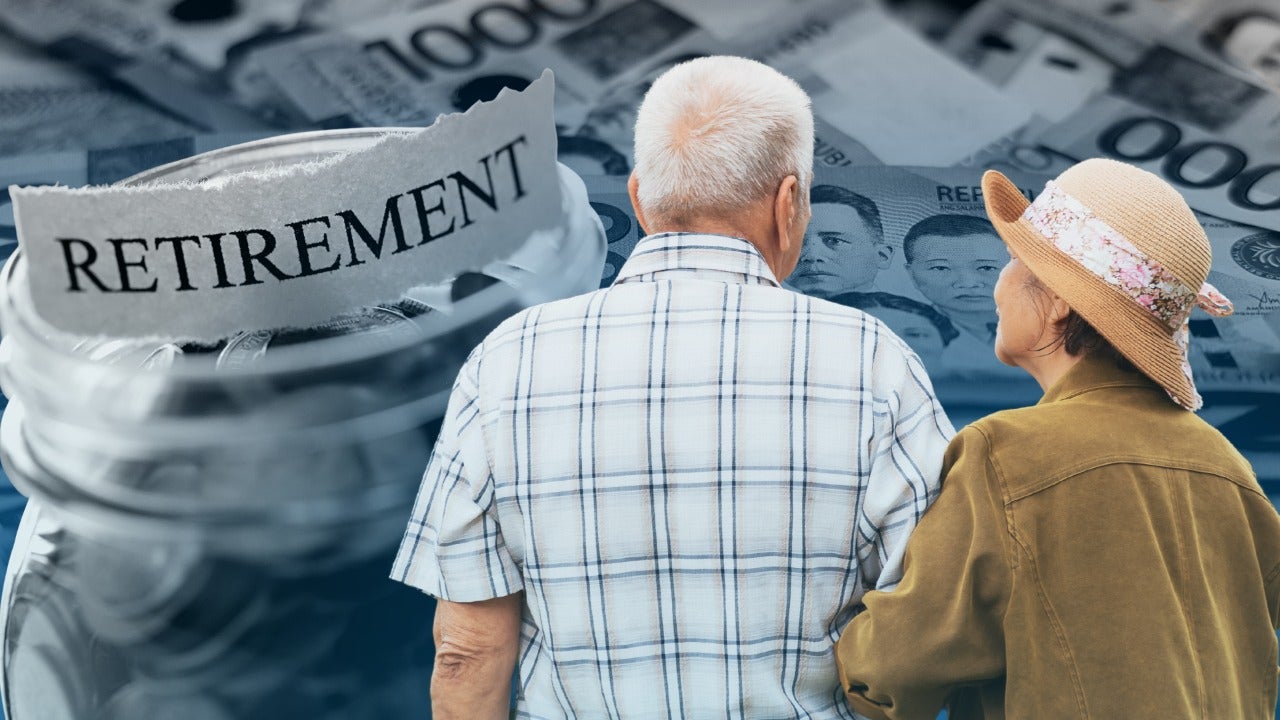 In the latest iteration of the MCGPI released on Tuesday (October 11), the Philippines ranked 43rd out of 44 economies included on the list, with an overall score of 42.0—slightly lower than the 42.7 in 2021

According to MCGPI, the country’s overall score, or index value, decreased slightly “primarily due to some minor adjustments.”

Similar to last year’s data, the Philippines again received a D-grade classification this year, which, according to Mercer and CFA Institute, meant that the country’s retirement income system has some desirable features. 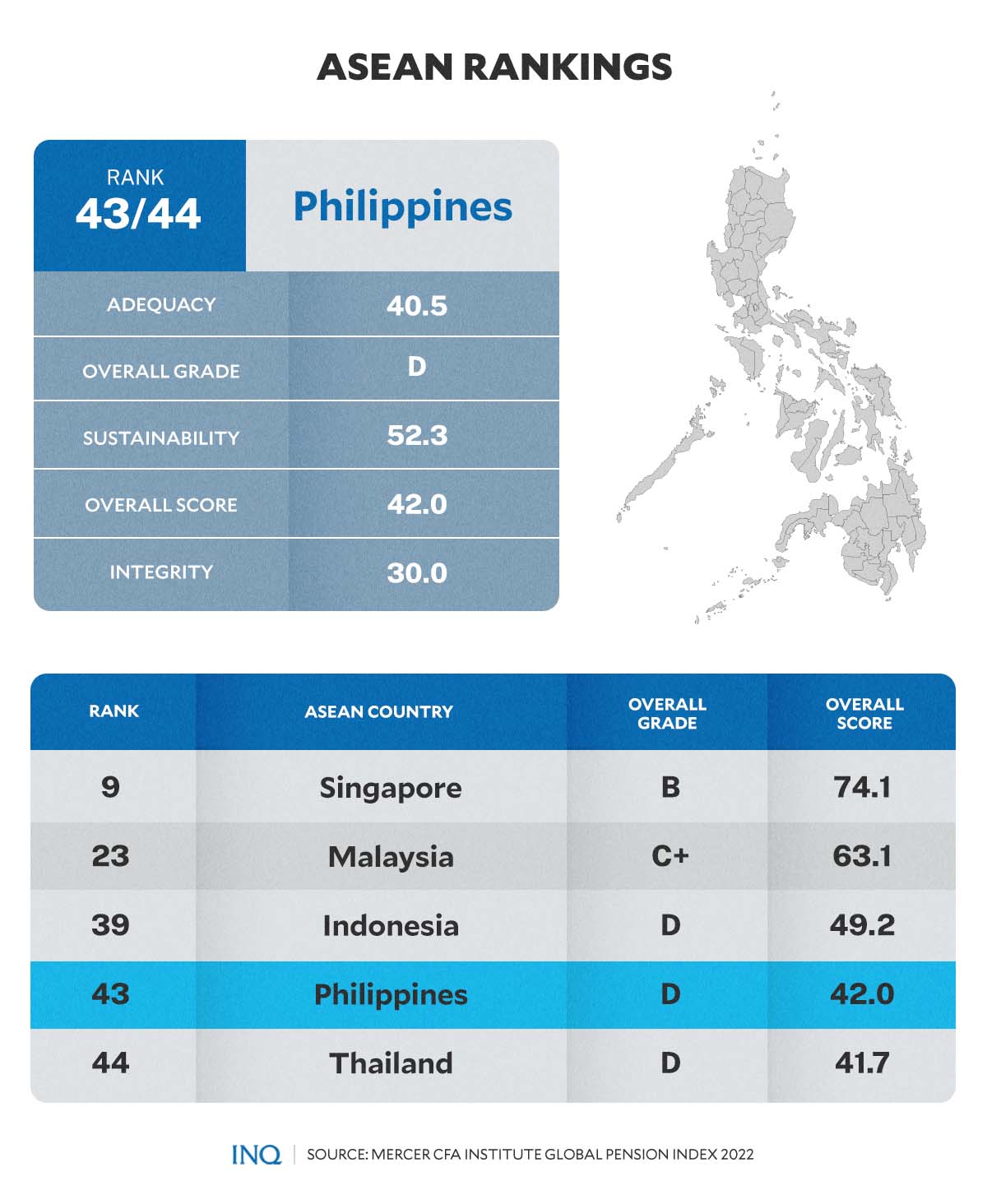 However, it also has major weaknesses and/or omissions that must be addressed. “Without these improvements, its efficacy and sustainability are in doubt,” Mercer-CFA Institute noted.

Other countries that received a D-grade classification this year—or an index value of around 35 to 50—include Indonesia, Turkey, India, Argentina, and Thailand.

“The MCGPI benchmarks retirement income systems around the world, highlighting some shortcomings in each system, and suggests possible areas of reform that would provide more adequate and sustainable retirement benefits,” the report said.

Compared to its ASEAN neighbors that were included in this year’s index, the Philippines continued to lag behind Singapore (9th globally), Malaysia (23rd), and Indonesia (39th) and was above Thailand (44th), which ranked last in both the region and in the overall ranking.

Singapore likewise remained the highest-ranking country in Asia after bouncing back from the slight dip in its overall index value last year (70.7) to 74.1 in 2022. MCGPI noted that it was “mainly due to the revised scoring matrix and an increase in net replacement rates.”

MCGPI highlighted in its report that most retirement income systems in the region saw overall improvements except for China (54.5), Indonesia (49.2), and the Philippines (42)

“In Asia, Malaysia (63.1) and Japan (54.5) were the most improved systems, with the former jumping from C to a C+ and the latter earning a C, up from its D in 2021. Aside from the revised scoring matrix, Malaysia’s increase was also due mainly to higher net replacement rates, while Japan had a revised approach relating to pension plan coverage,” MCGPI said.

MCGPI emphasized that despite progress in its retirement systems over the years, Asia still lags behind other regions, with an average overall index value of 53.8. It also fell behind the global average of 63.

“While Asia still lags the global average in the overall index value, we are seeing positive year-on-year improvements for most of the markets. That said, the challenges of longevity will persist indefinitely,” said Mercer’s Asia Wealth Business Leader Janet Li.

“Hence, governments cannot afford to put refining and improving their retirement systems on the back burner, but must prioritize and take action promptly,” Li added.

Nick Pollard, Managing Director in Asia Pacific of the CFA Institute, also noted that sharply higher prices, rising interest rates, currency depreciation, and capital outflows are affecting Asia’s development while its countries try to bounce back from the impact of the COVID-19 pandemic. 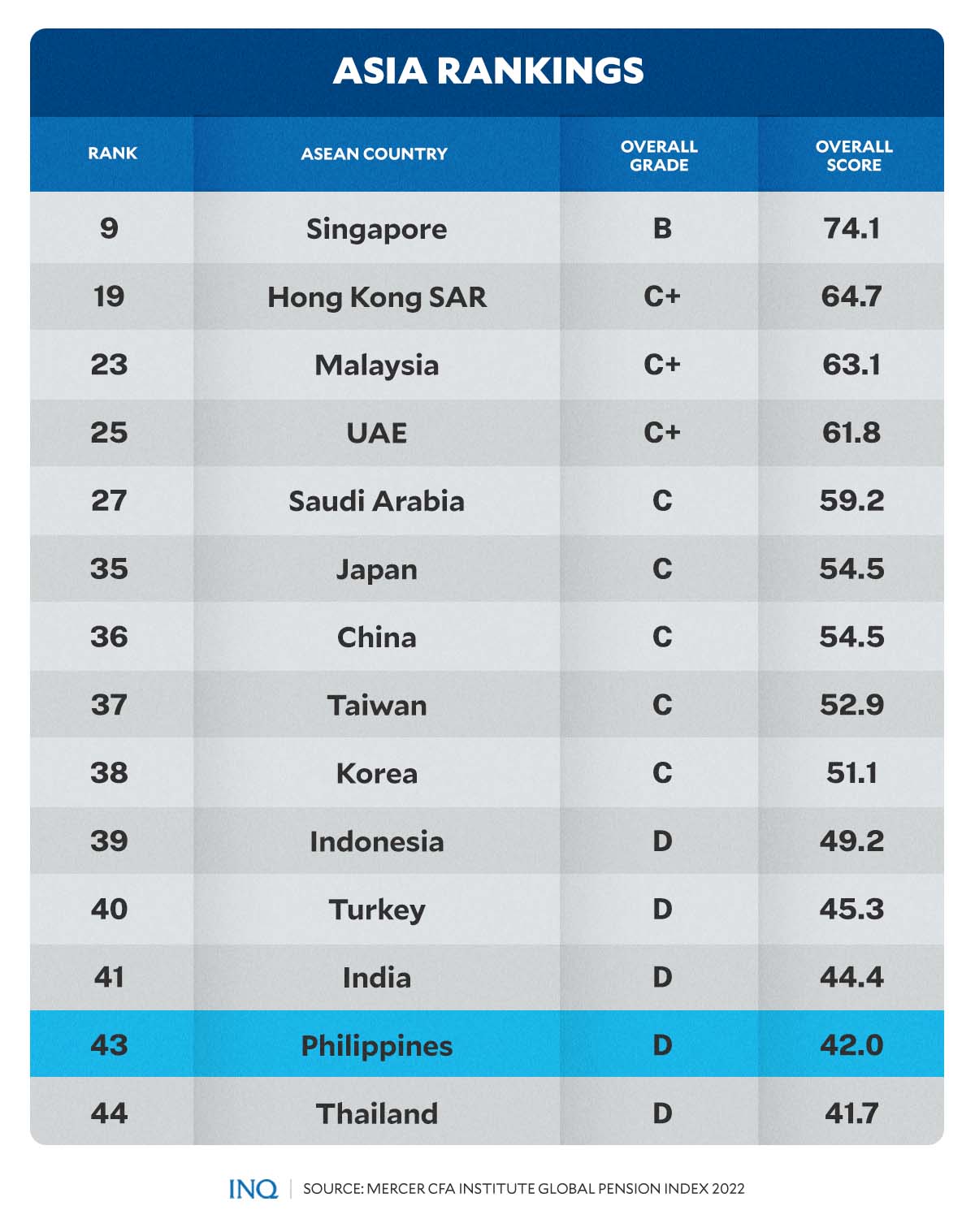 “Longer term, Asia, and the rest of the world, face the risk that these trends persist and become a new normal. As such, there is no market in Asia that doesn’t need urgent pension reforms, and policymakers and industry stakeholders need to take collective action to ensure the adequacy of pension balance sheets and the sustainability of retirement benefits,” Pollard said.

The MCGPI rankings were based on the weighted average of the adequacy, sustainability, and integrity sub-indices to measure each retirement system against more than 50 indicators.

The Philippines’ adequacy sub-index score, which measures the benefits provided to the poor and a range of income earners, improved slightly from 38.9 in 2021 to 40.5 this year.

However, the country’s sustainability sub-index and integrity sub-index scores were lower this year compared to 2021.

For the sustainability sub-index, the Philippines’ score went down from 52.5 last year to 52.3 in 2022. This sub-index, according to MCGPI, “considers a number of indicators that influence the long-term sustainability of current pension systems.”

“These include the economic importance of the private pension system; its level of funding; the length of expected retirement both now and in the future; the labor force participation rate of the older population; the current levels of public pension expenditure and government debt; and the level of real economic growth.” 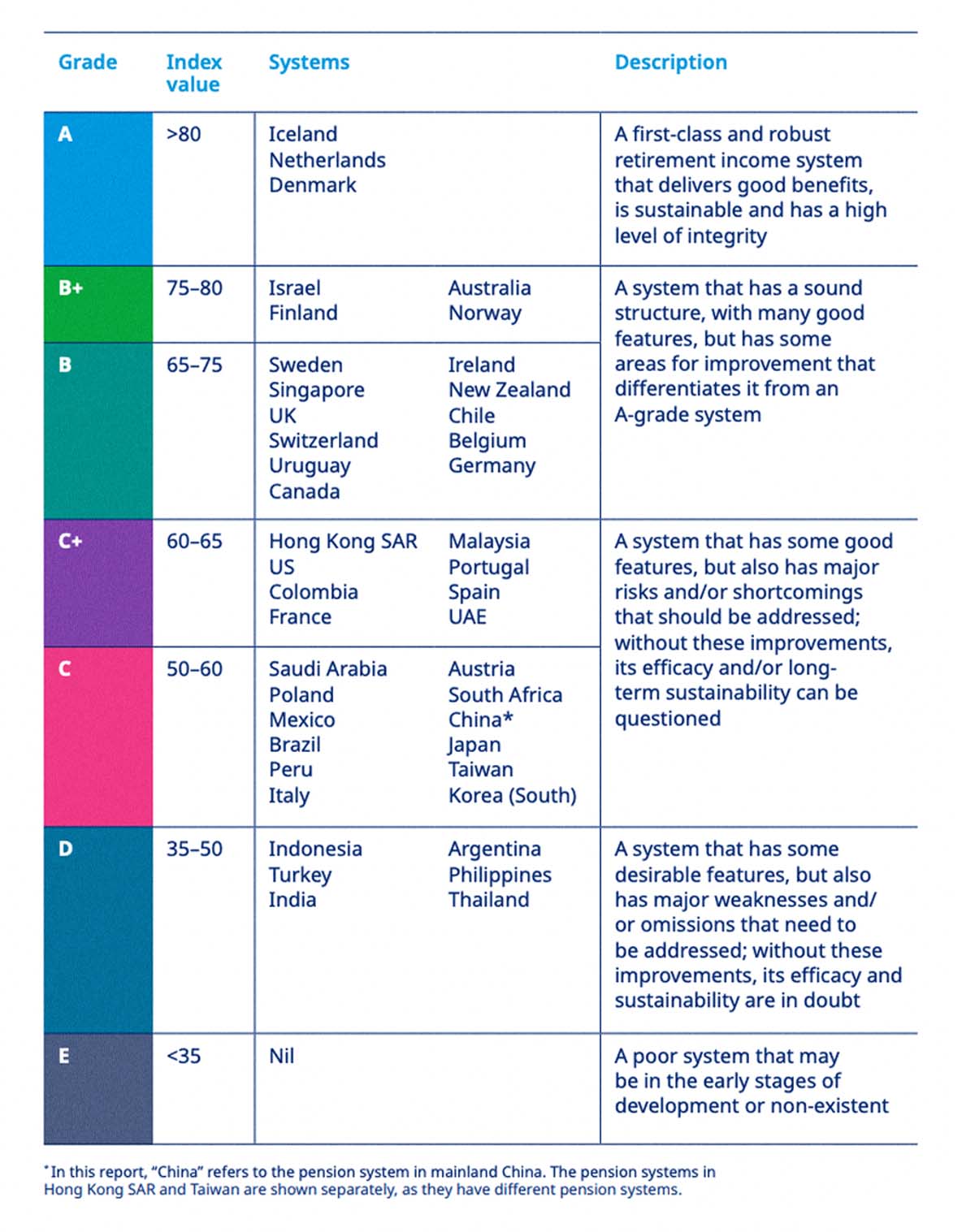 It considers three broad areas of the pension system—regulation and governance, protection and communication for members, and operating costs. 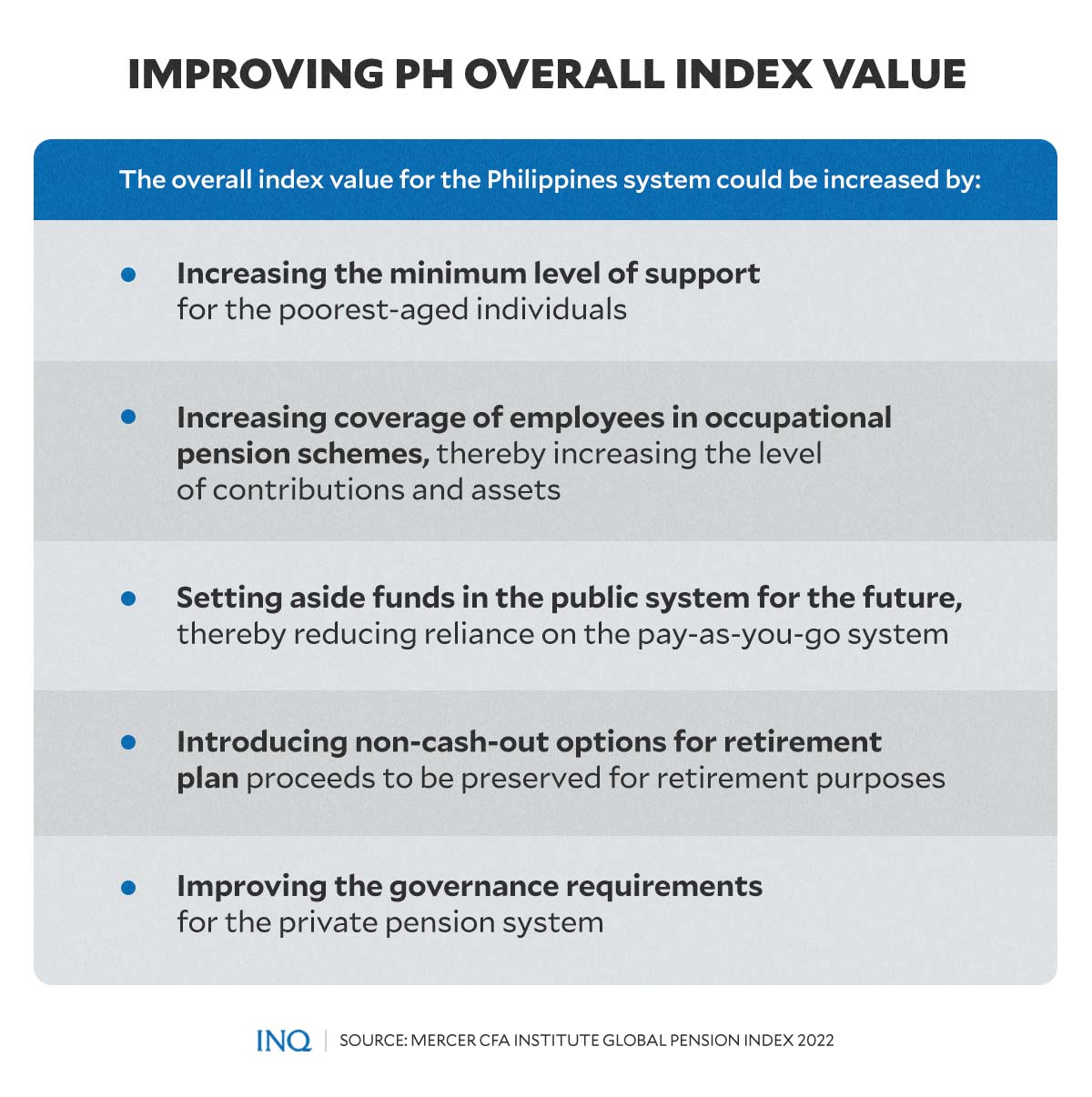 MCGPI noted that the lowest values for the integrity sub-index are for the Philippines (30.0) and Argentina (42.9).

MCGPI explained that the “very low scores” for the Philippines were primarily caused by its system “having no requirements in terms of communicating with plan members.”

To increase the overall index value for the Philippines’ retirement income system, MCGPI recommended raising the minimum level of support for the poorest-aged Filipinos.

Last May, Sen. Joel Villanueva sponsored the bill to increase social pensions for indigent senior citizens, emphasizing that P500 is not enough for their daily subsistence and medical needs.

In July, Villanueva announced that the measure finally lapsed into law.