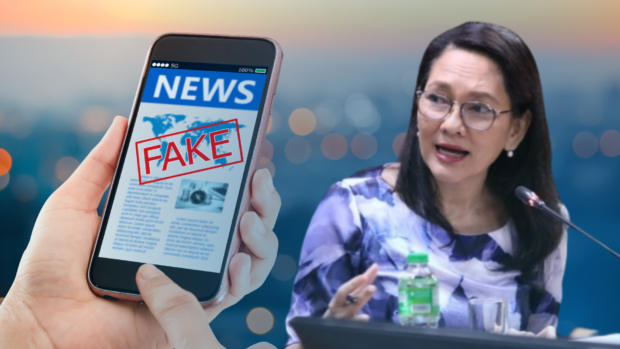 MANILA, Philippines — Opposition Senator Risa Hontiveros believes it is now high time that the government “pressures social media networks to be accountable” for the spread of fake news.

She made the remark following the recent Pulse Asia survey showing that 86 percent of adult Filipinos consider fake news a problem in the country.

“Lumalaki ang mga anak natin sa isang lipunan ng kasinungalingan. Empowering the public to seek out credible avenues for verified information should be a top priority,” the senator said in a statement.

According to Hontiveros, there is a need to legislate skills-based training and media literacy programs “to help the public detect fake news and re-build the habit of truth seeking.”

This, she said, should be backed by a strong partnership between national and local government, schools, non-government organizations and other training institutes.

“We should also consider adopting the European Union’s practice of requiring social media companies to submit reports on how disinformation spreads on their platforms and its impact on our country. It’s about time that the government pressures social media networks to be accountable,” Hontiveros said.

“A people who are empowered to accept nothing short of the truth can starve fake news peddlers out of business. We expect the government to lead the way by being uncompromising on the truth so that integrity becomes the norm again,” she further said.

Other senators, meanwhile, differed on whether or not there is a need a law to combat the proliferation of fake news.

Senator Jose “Jinggoy” Estrada is urging the Senate to start deliberations on his bill criminalizing the spread of fake news in the country as he finds the latest survey “disturbing.”

For Senator Nancy Binay, however, legislation is not necessary to fight fake news.

“The Constitution guarantees free speech, and it would be ironic if we regulate or restrict speech or other expression dahil magkaiba tayo ng opinyon o pananaw,” she said Wednesday.