THA UTHAI, Thailand — In the days before he murdered 36 people, including 22 children stabbed as they slept, the former police sergeant behind Thailand’s worst massacre was firing guns in his back yard.

For several nights the sound of 34-year-old Panya Khamrap’s 9 mm pistol cracked the silence in the sleepy village of Tha Uthai, neighbors said.

It was the latest show of violence from the former police officer, once a village success story who became an angry, introverted man in a downward spiral, though still invested with some of the authority his old job bestowed.

“How were we going to report him to the police? He was the police,” said Phuwan Polyeam, 29, who lives close by with her two children.

Panya murdered the 36 people in a three-hour rampage through the district in which he was born, shooting and stabbing to death neighbors, including a childhood friend.

The 22 child victims at the nursery were boys and girls aged two to five. Seven are in hospital.

The violence – the deadliest massacre of children anywhere in recent years – has stunned the country.

Authorities initially blamed drugs. Panya was described by police as a user of methamphetamine pills known as yaba and was fired in January for drug possession.

But an autopsy found no trace of drugs in Panya’s system on the day of the killings, on Thursday last week, police said.

Panya’s movements that day are obscure. There were multiple murders in different locations and police have yet to release a comprehensive account.

Reuters established a timeline of events through interviews with neighbours, witnesses, and an investigating officer.

They recounted three hours of horror and a slow police response. Phone records confirmed many details.

Surachate acknowledged the police response had been slow and officers arrived too late to stop the killing. He also pointed to the law, which forbids even licensed gun owners from firing at home or in public.

“If there had been an arrest then this might not have happened,” he said. 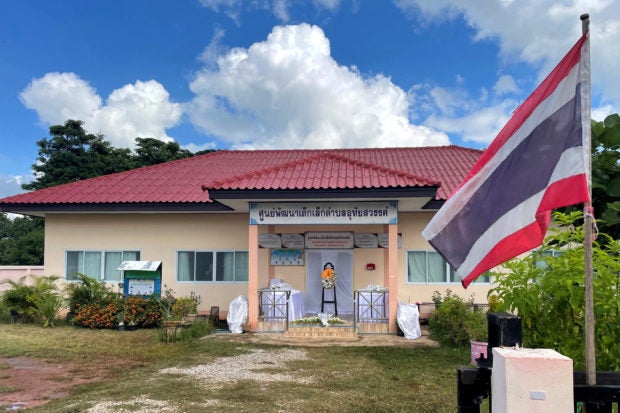 A view of the day care centre the day after a mass shooting in the town of Uthai Sawan, in the province of Nong Bua Lamphu, Thailand October 7, 2022. REUTERS FILE PHOTO

Panya grew up in the remote village of Tha Uthai and attended high school before winning a place to study law at a top Bangkok university. He later got a job with the police, working in some of the capital’s wealthiest neighborhoods.

But in 2020 he arrived back home. Newly divorced, he moved in with a woman who worked at a karaoke bar and her son.

He worked at a police station but in January was fired for drugs. Colleagues said he was hot tempered and started fights.

There were other troubling signs. A neighbor said he locked his girlfriend and her son inside when he went out.

The deputy chief of a neighboring village told media Panya had praised the 2020 massacre of 29 people in another province at the hands of a soldier, saying that he would have killed more. She declined to be interviewed.

Early on the day of the massacre, Panya had a court appointment on a drugs charge. The verdict was due the next day. Before dawn, neighbors heard him arguing with his girlfriend at their small home at the edge of the village. Police said she told him she was leaving him.

Reuters was unable to establish what happened at the court but media, citing neighbors, reported that Panya’s lawyer had asked him to show evidence of good character. Another neighbor told Reuters he had seen Panya’s mother with his degree certificate.

When he returned home, police said, Panya’s girlfriend and her son were gone.

At around midday, he left in a white pick-up truck. Turning a corner, he crashed into a man on a motorcycle outside a small shop. He rolled down the window and shot him, according to witness Sombat Rattani, who ran the shop.

The mortally wounded man crawled towards the shop, pleading for help, Sombat said. He glimpsed Panya through the window, his gun pointed at him, and thought he was going to die. They knew each other. Panya had bought water from his shop.

Panya did not shoot. Instead, he drove to an intersection where he rammed into a group of people, left his truck, and stabbed them. Three died and several were wounded.

From there he drove to the administrative complex where the Uthai Sawan Child Development Centre, a pink, one-story building, is located next to a government office.

Teachers in the nursery had put the children down for their nap by the time Panya arrived at around 12:30 p.m.

He attacked people in the courtyard, shooting some, slashing others with a long blade that farmers use for hacking crops.

Several people were killed there.

“Everything happened so quickly and there was blood everywhere,” said office worker Kittisak Polprakap, 29.

“I saw the wounded and dead sitting together at a table as if nothing had happened.”

People ran. Two female employees, Jidapha Boonsom, 48, and Saowaluk Keeta, 25, dashed into an office looking out onto the nursery.

Some staff called the police but were told they were busy elsewhere.

Panya shot twice at the nursery door and kicked it open, a witness told media. For about 20 minutes he went from room to room, shooting teachers and slashing the children with his machete.

Some teachers fled over a wall but not Supaporn Pramongmook, 26, who was eight-months pregnant. Another teacher, Maliwan Lasopha, tried to plead with Panya. They had played together as children.

He killed them both.

‘What are you doing?’

The office workers said Panya emerged calmly holding the blade and drove off.

News of the violence spread with photos showing up on social media. Suwimon Sudfanpitak, the aunt of one of the children killed that day, rushed to the complex to see two bodies outside the nursery. “His teacher came to apologize, saying there was nothing that she could do to save the kids,” she said.

The only child to emerge from the nursery unscathed, a three-year-old called Ammy, was carried out with a blanket covering her eyes.

After driving back to his neighborhood, Panya was approached by a neighbor. “What are you doing?” the man asked. “I’m here to fucking kill you,” Panya replied. He shot the neighbor dead before fatally attacking another, said witness Phuwan Polyeam.

Sheltering in her house with her two young children, her hand clamped over the mouth of her son to keep him quiet, she sent her mother-in-law, Suwan Tonsomsen, frantic messages. “He is here,” one read.

Suwan’s phone records showed numerous calls to the police. “They said there were not enough police,” she said, and they had to wait for a commando unit. “It took them a while,” she said.

Suwan said that after Panya tried to set fire to their car he left. He walked back to his house where, at around 3 p.m., he burned his truck, shot his girlfriend, her son and then himself.

The community is reeling.

“Everyone gets depressed,” shopkeeper Sombat said. “But the solution is not crime … Why did he attack and hurt children? That is what we’re asking.”