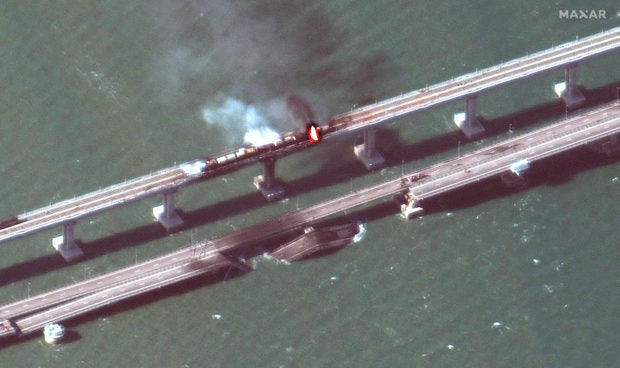 A satellite image shows a close up view of smoke rising from a fire on the Kerch bridge in the Kerch Strait, Crimea, October 8, 2022. Maxar Technologies/Handout via REUTERS

MOSCOW — Russia’s Federal Security Service (FSB) said on Wednesday that it had detained five Russians and three citizens of Ukraine and Armenia over the explosion that damaged the Crimea Bridge last Saturday, Interfax reported.

The FSB said the explosion was organized by the Main Intelligence Directorate of the Ukrainian Defence Ministry, and its director Kyrylo Budanov.

Ukraine has not officially confirmed its involvement in the blast, but some Ukrainian officials have celebrated the damage.

The explosion on the twelve mile-long bridge destroyed one section of the road bridge, temporarily halting road traffic. It also destroyed several fuel tankers on a train heading towards the annexed peninsula from neighboring southern Russia.

The bridge, a prestige project personally opened by Russian President Vladimir Putin in 2018, had become logistically vital to his military campaign, with supplies to Russian troops fighting in south Ukraine channelled through it.

Russian forces launched mass missile strikes against Ukrainian cities, including power supplies. At a televised meeting of Russia’s Security Council on Monday, Putin said the strikes were a retaliation for the Crimea bridge blast, which he said had been organized by Ukraine’s secret services.