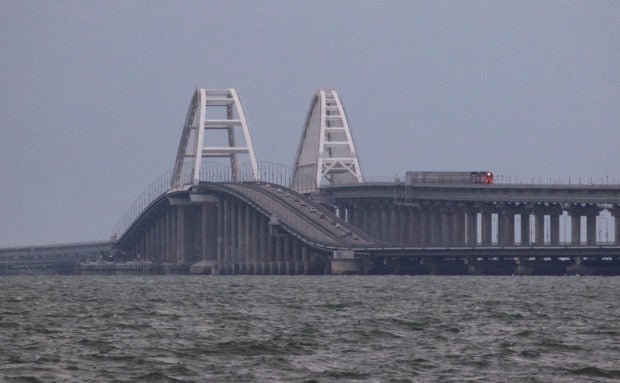 A passenger train and cars drive on the Kerch bridge, after an explosion destroyed part of it, in the Kerch Strait, Crimea, October 9, 2022. (REUTERS)

KYIV — Russian President Vladimir Putin accused Ukraine of orchestrating what he called a terrorist attack on a key bridge linking Russia and Crimea, as he prepared to hold a meeting of his security council on Monday.

“There is no doubt. This is an act of terrorism aimed at destroying critically important civilian infrastructure,” Putin said on Sunday in a video on the Kremlin’s Telegram channel.

“This was devised, carried out and ordered by the Ukrainian special services.”

Security Council Deputy Chairman Dmitry Medvedev said ahead of Monday’s meeting that Russia should kill the “terrorists” responsible for the attack.

“Russia can only respond to this crime by directly killing terrorists, as is the custom elsewhere in the world. This is what Russian citizens expect,” he was quoted as saying by state news agency Tass.

A blast on Saturday on the bridge over the Kerch Strait, a major supply route for Moscow’s forces in southern Ukraine, prompted gleeful messages from Ukrainian officials but no claim of responsibility.

The bridge is also a vital artery for the port of Sevastopol, where the Russian Black Sea fleet is based, as well as an imposing symbol of Russia’s 2014 annexation of the Crimean peninsula.

The damage to the bridge came amid battlefield defeats for Russia and growing concerns that Moscow could resort to nuclear weapons, after Putin repeatedly cautioned the West that any attack on Russia could provoke a nuclear response.

Putin on Sunday met Alexander Bastrykin, the head of Russia’s Investigative Committee, who presented findings of an inquiry into what he said was the explosion of a vehicle and subsequent fire on the bridge.

Bastrykin said the vehicle had traveled through Bulgaria, Georgia, Armenia, North Ossetia and Russia’s Krasnodar region before reaching the bridge. Among those who helped Ukrainian special services prepare were “citizens of Russia and foreign countries,” Bastrykin added in the video on the Kremlin’s Telegram channel.

Oleksandr Kovalenko, a military analyst and head of the website Information Resistance, told Espreso TV website, a digital broadcaster well-known in Ukraine, that Russia may intensify attacks on civilian targets after the explosion on the Crimea bridge.

“This probably means missile attacks on border areas – Sumy and Chernihiv regions. It could also mean using missiles and (Iranian-made) Shahed-136 drones to hit even deeper into Ukrainian territory,” he said.

The Russian transport ministry, quoted by RIA news agency, said nearly 1,500 people and 162 heavy cargoes had traveled by ferry across the Kerch Strait since the explosion.

Russia’s defense ministry said on Saturday its forces in southern Ukraine could be “fully supplied” through existing land and sea routes. 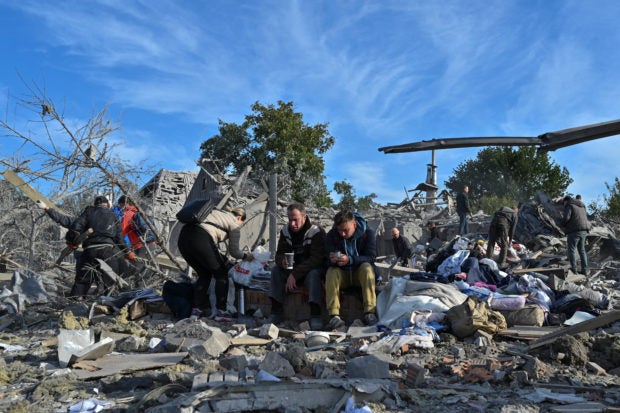 Distressed local residents sit at a site of a residential area heavily damaged by a Russian missile strike, amid Russia’s attack on Ukraine, in Zaporizhzhia, Ukraine October 9, 2022. REUTERS

The pre-dawn strikes were the third such attack against the region in four days. A strike on an apartment in the city on Sunday killed at least 13 people and injured 87 others, including 10 children, according to Ukrainian officials.

“This was a deliberate hit. Whoever gave the order and whoever carried it out knew what they were targeting,” he said in a video address.

Zaporizhzhia city, about 52 km (30 miles) from a Russian-held nuclear power plant, has been under frequent shelling in recent weeks, with 19 people killed on Thursday.

Emergency workers and firefighters cordoned off the nine-storey building and dug for survivors and casualties in the smoldering rubble of a massive central section that had collapsed after Sunday’s attack.

Vladimir Rogov, an official in the Russian-installed administration in Zaporizhzhia, said Ukrainian forces had shelled the city for “propaganda purposes”.

Most of the Zaporizhzhia region, including the nuclear plant, have been under Russian control since the early days of Russia’s invasion in February. The capital of the region, Zaporizhzhia city, remains under Ukrainian control.

US to continue arming Ukraine

The White House on Sunday declined direct comment on the bridge blast but said the United States would continue to arm Ukraine.

Kyiv demands that Russian forces leave the Black Sea peninsula, as well as Ukrainian territory they have seized in the invasion Putin launched in February.

Ukraine has recaptured more than 1,170 square kilometers (450 square miles) of land in its southern Kherson region since launching the start of its counterattack against Russia in late August, a military spokesperson said on Sunday.

Ukraine achieved lightning success with its offensive in the northeast, but its drive in the south to wipe out a Russian foothold on the west bank of the vast Dnipro River has been less rapid.