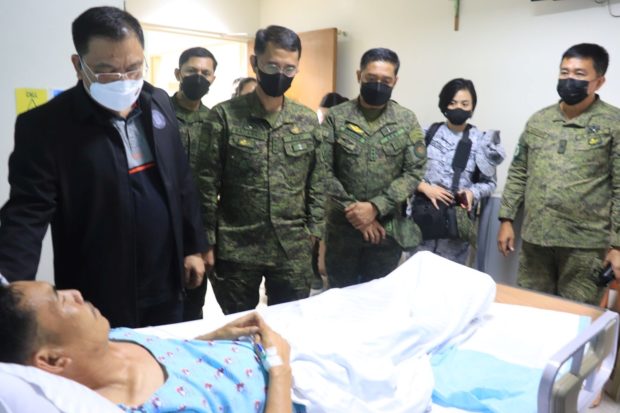 Top officials of the Department of National Defense and the Philippine Army visited the six injured soldiers in an encounter with the New People’s Army in Barangay Carabalan, Himamaylan City. All six soldiers, confined at a Bacolod City hospital, received “Wounded Personnel Medals” on Sunday, October 9. (Photo courtesy of the Philippine Army)

BACOLOD CITY — Six wounded soldiers who were injured in an encounter with the New People’s Army in Himamaylan City, Negros Occidental were given “Wounded Personnel Medals” by top government officials on Sunday, October 9.

Brigadier General Inocencio Pasaporte, 303rd Infantry Brigade commander, said posthumous recognitions would also be given to the two other soldiers — Corporals Christian Drilon and Rex Verde — who died during the encounter.

Faustino lauded the bravery and selfless dedication of the operating troops of the 94 Infantry Battalion in securing and protecting the community of Himamaylan City against the atrocities and illegal recruitment of minors by the NPAs.

“The medal symbolizes your bravery in facing our enemy and selfless dedication on your oath to protect the people and the country,” Pasaporte said.