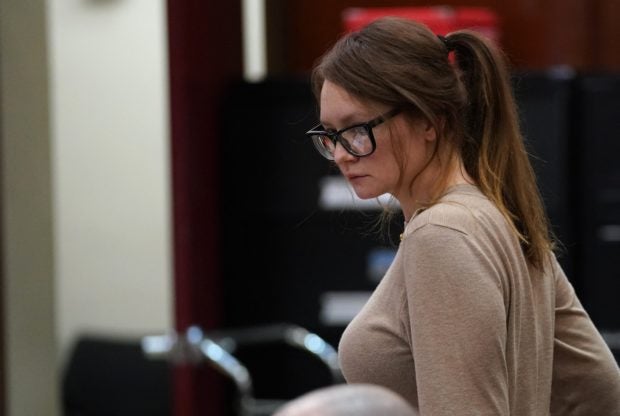 Anna Sorokin better known as Anna Delvey, the 28-year-old German national, whose family moved there in 2007 from Russia, is seen in the courtroom during her trial at New York State Supreme Court in New York on April 11, 2019. AFP FILE PHOTO

Sorokin, who used the name Anna Delvey while scamming more than a quarter of a million dollars from hotels, banks and friends, was granted conditional release by a judge after posting a bond, a spokesperson for the US Immigration and Customs Enforcement agency (ICE), told AFP.

The 30-year-old German national was released in February 2021 for good behavior after serving a portion of a four-to-12-year prison sentence, only to be arrested again the next month for overstaying her visa.

Sorokin will be confined to her home in New York City for a time after posting a $10,000 bond, will have to wear an electronic bracelet and is prohibited from using social media, US media reported.

Sorokin has spent the past 18 months fighting her deportation order to Germany, lodging a series of appeals.

Last November, the Board of Immigration Appeals (BIA) granted Sorokin an emergency request to remain in the United States while her removal was being processed, something she will now be able to do outside the walls of the detention center.

Born near Moscow, Sorokin is the daughter of a Russian truck driver who emigrated to Germany.

She assumed the name Anna Delvey and posed as the heiress to a fortune of $60 million to open the door to New York high society after arriving for Fashion Week in 2013.

Instantly recognizable thanks to her large designer glasses, Sorokin used her extraordinary ability to weave skillful lies to obtain tens of thousands of dollars in bank loans, travel free by private jet and live on credit in Manhattan hotels.

Arrested in 2017 and convicted two years later, she inspired television producer Shonda Rhimes (“Grey’s Anatomy”, “Scandal”) to make her the subject of the hit Netflix mini-series “Inventing Anna”, with Julia Garner in the title role.

Fake heiress Anna Sorokin to be deported to Germany—US media

Getting real: Former friend of fake heiress has book deal