Albay gets ready as Mayon shows signs of ‘unrest’ 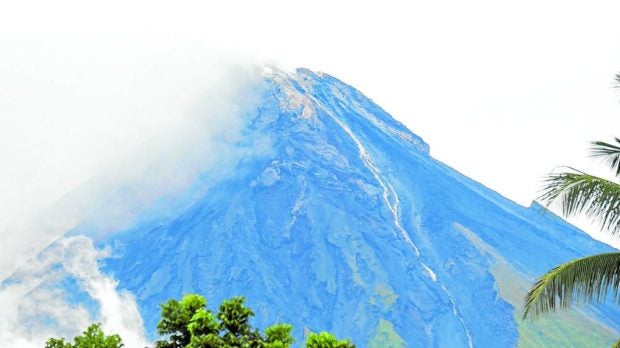 RESTIVE Mayon Volcano’s summit crater has “thin remobilized light-colored ash” in this photo taken from Cabagñan, Camalig, Albay, on Oct. 4. The Philippine Institute of Volcanology and Seismology has placed Mayon under alert level 2 on Friday, indicating the volcano is experiencing an “increasing unrest.” —NEHEMIAH MANZANILLA SITIAR/CONTRIBUTOR

LEGAZPI CITY—Villagers living near Mayon Volcano in Albay province were asked to prepare for a possible evacuation and looming lahar flows in case of a heavy downpour after alert level 2 was hoisted over the volcano on Friday due to its increasing unrest.

Mayor Paul Chino Garcia of Guinobatan town said he had alerted all the village chiefs in the area to be on standby for possible movement of residents around the volcano.

Guinobatan is one of the localities that straddle Mayon, along with the cities of Legazpi, Ligao and Tabaco and the towns of Daraga, Santo Domingo, Malilipot and Camalig.

In a text message, Garcia said local disaster officials have begun preparing the evacuation centers at the town center and upland villages.

The Philippine Institute of Volcanology and Seismology (Phivolcs) noted a “continued aseismic growth” of the volcano’s lava dome based on its 3 p.m. bulletin on Friday, citing the daily visual and camera monitoring of the summit crater. Aseismic refers to a movement that does not involve earthquakes.

Paul Karson Alanis, resident volcanologist of the Mayon Volcano Observatory Station at Ligñon Hill here, said the aerial survey on Friday morning showed “freshly extruded lava” at the base of the summit lava dome, which indicates that there was a “magmatic process” or melting of rocks.

Mayon was placed under alert level 1 on Aug. 21 when it underwent “a change in morphology and slight extrusion by approximately 40,000 cu m” between June 6 and Aug. 20, Alanis had then said.

Alanis reminded the public of possible lava dome collapse that would generate pyroclastic flow and rock fall along the south and southeast slopes of the volcano, facing Legazpi City, Daraga and Camalig.

“If the lava dome cracks, it would flow down and lead to pyroclastic flow,” he added.

“These plans would be implemented once the Phivolcs raised it (volcano) to alert level 3,” Daep told the Inquirer by phone on Friday.

Daep said they were still coordinating with the local governments to identify the families that needed to be evacuated from Mayon’s danger zones.

On Friday, Phivolcs did not record any volcanic earthquakes in the past 24 hours, but the public was “strongly advised” to avoid entering the six-kilometer-radius permanent danger zone due to the possibility hazardous magmatic eruption. “In case of ash fall events that may affect communities downwind of Mayon’s crater, people should cover their nose and mouth with damp, clean cloth or dust masks,” the agency added.

It also asked civil aviation authorities to advise pilots to avoid flying close to Mayon’s summit, noting that ash from any sudden eruption could endanger aircraft.

—WITH A REPORT FROM JASMINE ABBYGAIL BOISER