PH borrows $2B in first bond sale under Marcos 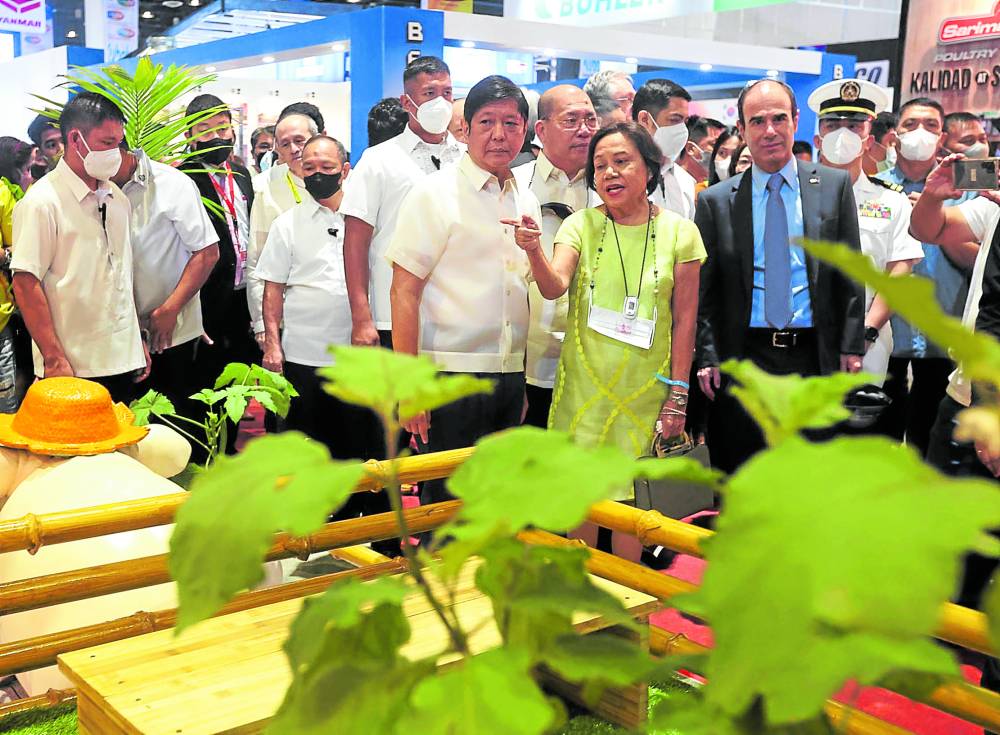 ‘AGRI’ ON THEIR MINDS President Marcos and Sen. Cynthia Villar view the exhibits at an agribusiness fair that opened on Thursday at the World Trade Center in Pasay City. —MARIANNE BERMUDEZ

Recent international sorties by President Marcos and his economic team appeared to bear fruit as the government raised a total of $2 billion in commercial bonds on Thursday, just a day after launching them in the global market despite volatile conditions.

Government bonds are essentially public debt and the bond buyers are the creditors.

The total amount was a little less than the $2.25 billion raised in the national government’s previous outing in March but with a much higher cost.

According to the BTr, the five-year bond bears a coupon rate of 5.17 percent. In March, the Duterte administration raised $500 million from five-year bonds at 3.229 percent.

In March, the Russian invasion of Ukraine was just starting to send ripples of uncertainty across the global economy. Similarly, just beginning was the trend of monetary policy normalization among central banks, especially among developed economies like the United States, which has sent the US dollar to its strongest position against other currencies in decades.

Last month, before this latest foray into the global bond market, the President and his economic managers held economic briefings in Singapore and New York, receiving strong interest and attendance from international investors, according to the BTr.

The government navigated the volatile market and successfully priced the bonds despite the ongoing weakness in global credit markets amid high inflation and rising US interest rates, it said.

In general, a government [or sovereign borrower] that issues bonds is relatively less likely to default compared to a corporate borrower.

As a borrower, the Philippine government has investment-grade credit ratings as assessed by major credit watchers such as Moody’s Investors Service, Fitch Ratings, and S&P Global Ratings. Investment grade means that the borrowing has a relatively low risk of default and the borrower is capable of repaying the debt.

The new bonds would eventually form part of the national government’s debt stock, which was pegged at a record high of P13.02 trillion in August. Of that total, 31 percent or P4.08 trillion is owed to foreign lenders.

As of end-June, the share of the Philippines’ public debt to the economy was 62.1 percent.

The country’s debt-to-GDP ratio fell to a record-low 39.6 percent in 2019, but massive borrowings to finance cash assistance to poor households and the purchase of COVID-19 vaccines bloated the debt pile.

The Department of Finance earlier said that the Duterte administration contracted a total of 120 loans and global bond offerings worth $50.8 billion from July 2016 to December 2021.

In May 2019, the Philippines returned to the European bond market after 13 years, selling 750 million in euro bonds.

Activists fear the Marcos bonds would bury the country deeper in debt, which he would pass on to future administrations.

“He would be freed from the obligation of paying and would leave behind a huge debt,” said Danilo Ramos, chair of the progressive farmers’ group Kilusang Magbubukid ng Pilipinas (KMP).

“The Philippines is already deep in debt with its P13 trillion existing debt, which means every Filipino essentially owes P118,000,” he said.

Bayan secretary general Renato Reyes was wary about where the fresh funds might be used, especially if they were allocated for confidential and intelligence expenses, pork barrel and counterinsurgency.

If Malacañang “insists that there should be no transparency when it comes to spending by the President, then these new loans will only burden taxpayers,” he said, referring to statements by Executive Secretary Lucas Bersamin on Mr. Marcos’ two-day visit to Singapore to watch the Formula 1 Grand Prix.

Bersamin had said that questions on whether public funds were used for that trip were “irrelevant.”

The bond sale comes as Mr. Marcos is set to mark his first 100 days as president.

When he assumed office, he promised to lower poverty to single digits and pledged to uplift the condition of farmers, teachers, health workers and migrants.

But instead of coming closer to fulfilling his promises, Mr. Marcos is enlarging public debt amid rising inflation, Reyes said.

“We do not see real, comprehensive solutions, only speeches aimed at pleasing foreign interests and the local elite,” he said. “Mr. Marcos has exhibited a knack for lavish living amid an economic crisis and a stubborn refusal to be held accountable for this.”