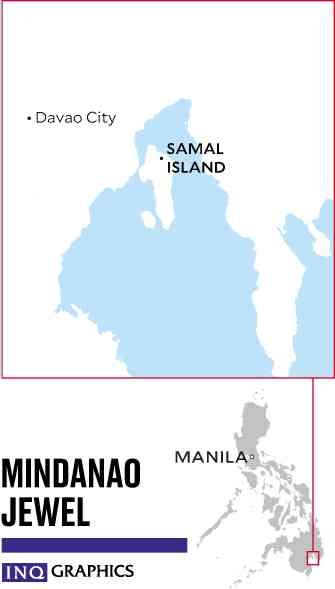 DAVAO CITY—Issues relating to right-of-way (ROW) and environmental impact are hounding the long-awaited construction of a bridge that will connect this premier urban center of Mindanao with the tourist haven Samal Island.

The Samal Island-Davao City Connector (SIDC) project, which will be funded by China at the cost P19.3 billion, is feared to cause the destruction of coral reefs and other marine habitat around its landing point on the island.

This is why the Rodriguez-Lucas family that owns Costa Marina Beach Resort in Samal’s Babak district—the target landing point of the bridge—is opposing its current design and is one with environmental groups in calling for a “realignment” of the bridge.

To show its support for the project, which is a four-decade dream of Davao City, the family has offered to donate another property as an alternative landing point.

But Dean Ortiz, spokesperson for the Department of Public Works and Highways (DPWH) in Davao region, told reporters in a recent forum here that the agency’s unified project management office, which has jurisdiction over the bridge project, had already chosen the Costa Marina site, from among the various options.

Costa Marina, he said, offers the shortest and the most economical landing point from Davao City’s Barangay Lizada in Lanang District, making the actual bridge length at 1.2 kilometers.

On Tuesday, the DPWH project team visited Costa Marina, accompanied by the Philippine Coast Guard, for an ocular inspection and validation.

This raised alarm among members of the Rodriguez-Lucas family, who threatened to sue the group for “illegally” entering their property.

“[T]respassing, coercion and other criminal charges are being mulled against the resorts’ unwelcome guests and their armed contingents,” said a statement from the Rodriguez-Lucas family.

The statement claimed that the group, composed mostly of the DPWH project team, the City Environment and Natural Resources Office in Panabo, representatives of the mayor’s office and the Chinese contractor of the project “illegally entered [the family’s] properties with armed men in tow …”

Ortiz clarified that the DPWH regional office was not involved in the project but was only there to aid the project team. He said the armed men were members of the Philippine Coast Guard, whom the project team requested for safe navigation to the island.

“There was no forceful entry because when they arrived, the resort owners were there and they talked, they took their snacks and they left. There was no commotion,” he said.

“Some resorts don’t like anybody to dock on their beach line but that particular area of the property [where we docked] had no foreshore lease or occupational fee since 2006, so there was no forceful entry because [that area was a] neutral ground, that’s a public property to begin with, so [entering it] was legal,” Ortiz said.

He assured, however, that just like other projects of the DPWH, they would not enter a property nor start a project without the consent of landowners. Since they have decided on the bridge’s landing point, they will soon be negotiating with the family, so expropriation as a recourse is still farthest from their minds.

Earlier, environmental groups belonging to the Save Samal Reefs Alliance called for the realignment of the project because of the damage that the bridge construction might bring to the Paradise coral reefs and marine life in the area.

The statement of the Rodriguez-Lucas family claimed that the environmental compliance certificate for the bridge project could have been issued “without a protected area management board clearance.”

“Contrary to the DPWH’s claim that the Samal landing site is outside a protected area, the entire Samal Island remains a protected area. It was established as a Mangrove Swamp Forest Reserve under Proclamation No. 2152, series of 1981—an initial component of the National Integrated Protected Areas System,” the family statement said.

“The law requires an act of Congress to disestablish a protected area or modify its boundary. The DPWH has not come forward with any such evidence insofar as Samal Island is concerned,” it said.