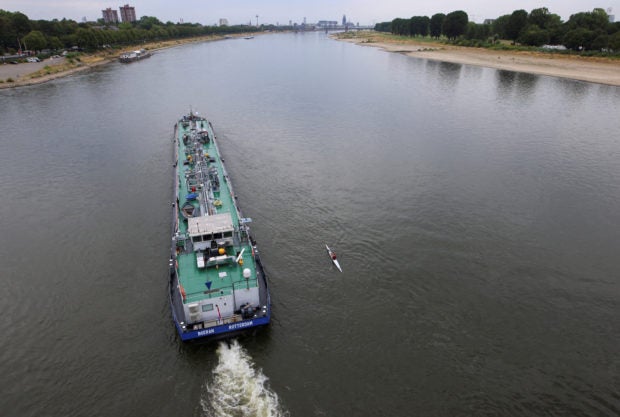 A canoer paddles next to a cargo ship at low water levels in the Rhine river in Cologne, Germany, August 15, 2022. REUTERS FILE PHOTO

Weeks of high temperatures and little rainfall in August had drained water levels on Germany’s commercial artery, causing delays to shipping and pushing up freight costs.

The reference water levels in the last northern sections of the river suffering from shallow water have now returned to normal, including around Cologne and Duisburg, brokers said.

“Ships can now sail fully loaded on all of the river,” one broker said.

Low waters in August meant some freight vessels sailed only about 25% full in August, increasing costs for cargo owners who needed more ships to make their deliveries. There were fears the disruption could hit overall German economic growth.

The reference water level at the major chokepoint of Kaub near Koblenz was at 2.51 meters on Tuesday, well above the 1.5 meters vessels need to sail fully loaded. It fell to just 32 centimeters in August, disrupting shipping.

The Rhine is an important shipping route for commodities including grains, minerals, coal and oil products.